Pope: Shame on those who take advantage of the elderly ill - Catholic Courier 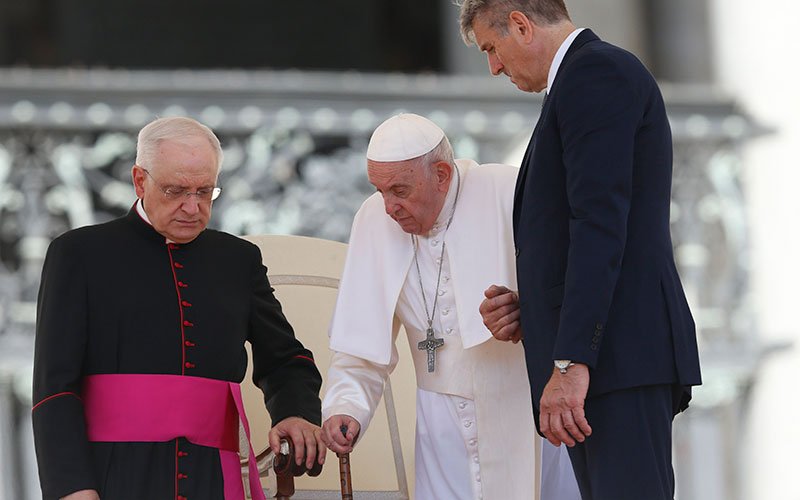 Pope Francis walks with help from his aide, Sandro Mariotti, during his general audience in St. Peter's Square at the Vatican June 1, 2022. Also pictured is Msgr. Leonardo Sapienza, an official of the prefecture of the Papal Household. (CNS photo/Paul Haring)

Pope: Elderly must share life’s wisdom with the young

“We are all tempted to hide our vulnerability, to hide our illness, our age and our seniority, because we fear that they are the precursor to our loss of dignity,” the pope said June 1 at his weekly general audience in St. Peter’s Square.

“Do not hide old age, do not hide the fragility of old age,” he said, because society needs to be taught and reformed to respect all seasons of life.

Continuing his series of talks about old age, the pope looked at Psalm 71, in which the author, an elderly man, laments his many afflictions and misfortunes, and pleads to the Lord for help, expressing, in the end, hope and praise.

The psalmist shows how the process of becoming more weak, fragile and vulnerable with advancing age “becomes an opportunity for abandonment, deception and for prevarication and arrogance, which at times prey upon the elderly,” the pope said.

Even today, “in this throwaway society, this throwaway culture, elderly people are cast aside and suffer these things,” he said. It is “a form of cowardice in which we specialize in this society of ours” where there are many people “who take advantage of the elderly, to cheat them and to intimidate them in myriad ways.”

“Shame should fall on those who take advantage of the weakness of illness and old age,” he said.

“Such cruelty also occurs within families,” he said, asking people reflect on how they relate to their older relatives: “Do I remember them, do I go to visit them? Do I try to make sure they lack nothing? Do I respect them?” and talk with them to “obtain wisdom?”

“Remember that you, too, will become elderly. Old age comes for everyone. And treat the elderly today as you would wish to be treated in your old age,” the pope said.

Everyone in society “must hasten to take care of the elderly — they are its treasure,” he said.

“How is it that modern civilization, so advanced and efficient, is so uncomfortable with sickness and old age? How is it that it hides illness, it hides old age? And how is it that politics, which is so committed to defining the limits of a dignified survival, is at the same time insensitive to the dignity of a loving coexistence with the old and the sick?” he said.

The elderly author of the psalm first sees his old age as a defeat, then he “rediscovers trust in the Lord. He feels the need to be helped. And he turns to God,” the pope said.

This is a lesson for everyone to learn: that God never rejects the prayer of those in need of help and that “we all need to abandon ourselves to the Lord, to invoke his help,” and to abandon oneself to the care of others, he said.

“Do not hide frailties,” he said, because there is a “magisterium of frailty,” which is a teaching that “opens up a decisive horizon for the reform of our own civilization. A reform that is now indispensable for the benefit of the coexistence of all.”

“The marginalization of the elderly — both conceptual and practical — corrupts all seasons of life, not just that of old age,” he said.