Pope simplifies annulment process, asks that it be free of charge - Catholic Courier 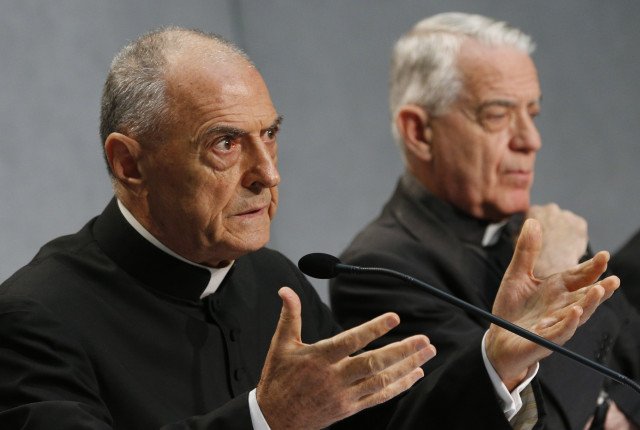 Msgr. Pio Vito Pinto, dean of the Roman Rota, a Vatican court, and president of the commission that drafted the new rules on marriage annulments, explains Pope Francis’ decisions to the press Sept. 8.

VATICAN CITY (CNS) –While a juridical process is necessary for making accurate judgments, the Catholic Church’s marriage annulment process must be quicker, cheaper and much more of a pastoral ministry, Pope Francis said.

Rewriting a section of the Latin-rite Code of Canon Law and of the Code of Canons of the Eastern Churches, Pope Francis said he was not “promoting the nullity of marriages, but the quickness of the processes, as well as a correct simplicity” of the procedures so that Catholic couples are not “oppressed by the shadow of doubt” for prolonged periods.
The Vatican released Sept. 8 the texts of two papal documents, “Mitis Iudex Dominus Iesus” (“The Lord Jesus, the Gentle Judge”) for the Latin-rite church and “Mitis et misericors Iesus,” (“The Meek and Merciful Jesus”) for the Eastern Catholic churches.
The changes, including the option of a brief process without the obligatory automatic appeal, go into effect Dec. 8, the opening day of the Year of Mercy.
The rules for the Latin and Eastern churches are substantially the same since the differences in texts refer mainly to the different structures of the hierarchy with Latin churches having bishops and Eastern churches having eparchs and patriarchs.
Pope Francis said the changes in the annulment process were motivated by “concern for the salvation of souls,” and particularly “charity and mercy” toward those who feel alienated from the church because of their marriage situations and the perceived complexity of the church’s annulment process.
The new rules replace canons 1671-1691 of the Code of Canon Law and canons 1357-1377 of the Eastern code. Pope Francis also provided a set of “procedural regulations” outlining how his reforms are to take place, encouraging bishops in small dioceses to train personnel who can handle marriage cases and spelling out specific conditions when a bishop can issue a declaration of nullity after an abbreviated process.
Those conditions include: when it is clear one or both parties lacked the faith to give full consent to a Catholic marriage; when the woman had an abortion to prevent procreation; remaining in an extramarital relationship at the time of the wedding or immediately afterward; one partner hiding knowledge of infertility, a serious contagious disease, children from a previous union or a history of incarceration; and when physical violence was used to extort consent for the marriage.
The reformed processes were drafted by a special committee Pope Francis established a year earlier. Among the criteria he said guided their work, the first he listed was the possibility of there being “only one executive sentence in favor of nullity” when the local bishop or judge delegated by him had the “moral certainty” that the marriage was not valid. Previously an appeal was automatic and a declaration of nullity had to come from two tribunals.
Msgr. Pio Vito Pinto, dean of the Roman Rota, a Vatican court, and president of the commission that drafted the new rules, told reporters that Pope Francis asked for updates throughout the year, sought a review by four “great canonists” not involved in the drafting and in the end adopted the changes with “great seriousness, but also great serenity.”
The changes made by Pope Francis, particularly the responsibility and trust placed in local bishops, are the most substantial changes in the church’s marriage law since the pontificate of Pope Benedict XIV in the mid-1700s, Msgr. Pinto said. Even with the 1917 and 1983 new Codes of Canon Law, the process for recognizing the nullity of a marriage remained “substantially unchanged,” he said.
“Putting the poor at the center is what distinguishes the reform of Pope Francis from those made by Pope Pius X and Pope Benedict XIV,” Msgr. Pinto said.
In fact, Pope Francis ordered that the “gratuity of the procedure be assured so that, in a matter so closely tied to the salvation of souls, the church — by demonstrating to the faithful that she is a generous mother — may demonstrate the gratuitous love of Christ, which saves us all.”
Pressed by reporters about how quickly the new procedures will go into effect in dioceses around the world, Msgr. Pinto said it will take some dioceses longer than others to adapt to the new norms and to find ways to finance their tribunals other than charging couples. People must remember, he said, that the canon lawyers who are not priests deserve to be compensated and need to support their families.

Such pastoral concern prompted Bishop Salvatore R. Matano to waive the local fees associated with the annulment process in the Diocese of Rochester more than a year ago.

As of July 1, 2014, the diocesan Tribunal — or church court — stopped assessing local fees for the process, although in certain cases fees still could be assessed by other church courts outside the diocese. The move was welcomed by many local Catholics, according to Father Louis Sirianni, judicial vicar in the Tribunal. Local petitions for annulments have risen more than 30 percent since Bishop Matano announced the diocese would begin waiving the annulment fees, Father Sirianni told the Catholic Courier in June 2015.

"Those petitioning for an annulment are at a very sensitive moment in their lives and should find in the Church a place to receive counsel, advice and support," Bishop Matano said in a May 2015 statement. "Attaching fees might well have deterred some people. That there has been an increase in the number of people receiving this ministry since that announcement is a source of comfort, as this process can be provide much healing and solace."

The new rules issued by the Vatican are not retroactive, Msgr. Pinto said; however, any initial sentence issued Dec. 8 or later would fall under the new rules and not require an automatic appeal if both parties agree.
Cardinal Francesco Coccopalmerio, president of the Pontifical Commission for Legislative Texts, who also was a member of the commission, insisted the pope’s new rules were not about “annulling marriages,” but about recognizing and declaring the nullity of a marriage, in other words, declaring that it never existed as a valid sacrament.
Although the new rules remove the obligation that a declaration of nullity automatically be appealed, he said, it does not remove the right of one of the parties to appeal the decision. However, he said, “and this is a great innovation,” if the appeals court believes the appeal is “obviously a delaying tactic,” the appeals court can issue a decree confirming the nullity of the marriage without a full process.
Msgr. Alejandro Bunge, secretary of the commission and a member of the Roman Rota, said the new processes are motivated by recognition of the church as a “field hospital,” as Pope Francis has described it. “For those who have special injuries — a marriage null from the beginning — we will have intensive care” in the form of more rapid annulment procedures.
While many marriage cases will continue to require time in order to arrive at the truth, he said, the longer procedure will be reserved to those cases in which it is not obvious that the marriage was null from the beginning and in which the couple does not agree that a real marriage never existed.
Byzantine Bishop Dimitrios Salachas of Greece, also a member of the commission that drafted the new rules, said they were urgent for his Eastern church. Some 90 percent of his married faithful are married to a member of the Greek Orthodox Church, which permits second marriages under special penitential provisions.
Most Catholics who have divorced an Orthodox “don’t wait years and years” for the Catholic Church’s double declaration of nullity, he said. “They just leave,” finding it easier to follow the Orthodox Church’s procedures and begin a second union in the Orthodox Church.
The changes, he said, “were necessary, including to keep the Catholics” in the church.
Copyright © 2023 Catholic News Service, Inc. All rights reserved. Linking is encouraged, but republishing or redistributing, including by framing or similar means, without the publisher's prior written permission is prohibited.