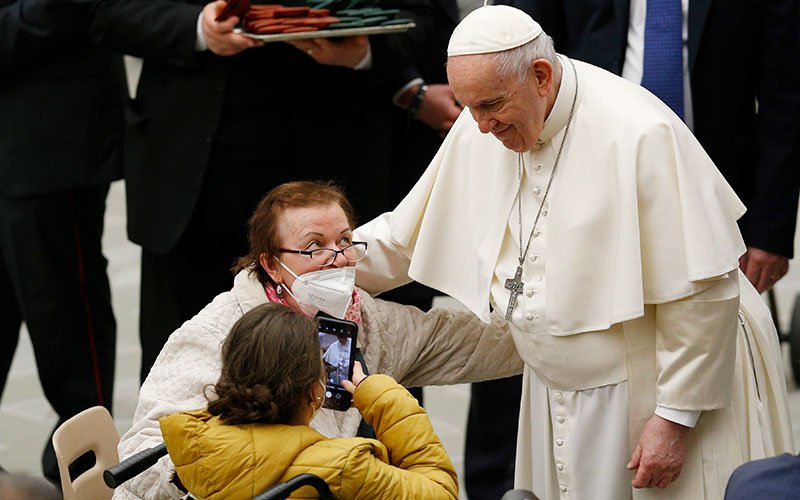 Pope Francis greets women during his general audience in the Paul VI hall at the Vatican April 6, 2022. (CNS photo by Paul Haring)

VATICAN CITY (CNS) — Smaller countries like Malta are called to set an example of true freedom in a world that can seem overwhelmed by powerful nations that seek to extend their own economic, military or ideological interests, Pope Francis said.

Reflecting on his recent visit to the Mediterranean archipelago during his weekly general audience April 6, the pope said Malta “represents the rights and power of the ‘small’ nations,” which exemplify the respect, freedom and coexistence that stands “opposed to the colonization of the most powerful.”

“After World War II, the attempt was made to lay the foundations of a new era of peace. But unfortunately — we never learn, right? — the old story of competition between the great powers went on. And, in the current war in Ukraine, we are witnessing the impotence of the United Nations,” he said.

Pope Francis told people at the audience that the motto of his April 2-3 trip described the “unusual kindness” of the people of Malta when St. Paul shipwrecked on the island nearly 2,000 years ago.

Recalling his April 3 meeting with about 200 migrants at the John XXIII Peace Lab in Hal Far, the pope said Christians must never tire of listening to the testimonies of migrants so they can counter the “distorted vision that is often circulated in the mass media.”

“Every migrant is unique. He or she is not a number but a person,” he said. “Each is unique just like each one of us. Every migrant is a person with dignity, with roots, with a culture. Each of them is the bearer of a wealth infinitely greater than the problems they bring.”

“It depends on how we take it; it depends on us,” the pope said. “Those who gave life to the John XXIII center on Malta made the Christian choice.”

Pope Francis said that although he was grateful that Malta remains a “key place” of evangelization and Christian witness, it is not immune to the “wind of secularism, of a globalized culture based on consumerism, neo-capitalism and relativism.”

Yet its link to St. Paul as well as the Maltese people’s devotion to Mary continue to support evangelization and the “joyful proclamation of the Gospel.”