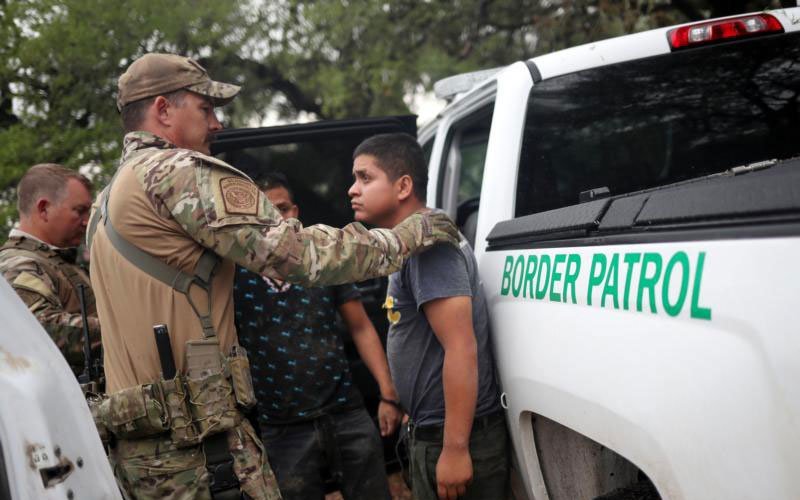 Members of the Border Patrol Search, Trauma, and Rescue Unit near Falfurrias, Texas, apprehend an immigrant from Guatemala June 19. Pope Francis told Reuters he stands with the U.S. bishops in their condemnation of the Trump administration's immigration policy has led to children being held in government shelters while their parents are detained in federal prison. (CNS photo by Adrees Latif/Reuters)

VATICAN CITY (CNS) — Pope Francis said he stands with the U.S. bishops who recently condemned the Trump administration’s policy on immigration that has led to children being held in government shelters while their parents are sent to federal prisons.

On the first day of their June 13-14 spring assembly in Fort Lauderdale, Florida, Cardinal Daniel N. DiNardo of Galveston-Houston, president of the U.S. Conference of Catholic Bishops, read a statement on behalf of the bishops denouncing the government’s zero-tolerance policy.

“Families are the foundational element of our society, and they must be able to stay together. While protecting our borders is important, we can and must do better as a government, and as a society, to find other ways to ensure that safety. Separating babies from their mothers is not the answer and is immoral,” the statement said.

The political rise of populist movements in both the United States and in Europe has led to a severe crackdown on men, women and children trying to escape war, violence, poverty and persecution.

In Italy, Interior Minister Matteo Salvini banned the NGO rescue ship Aquarius, with more than 600 migrants aboard, to dock and has vowed to stop any foreign boats carrying rescued migrants into the country.  The separation of families in the United States, however, isn’t a new problem, the pope said.

In a transcript of the interview shared by Reuters, the pope said, “During Obama’s (presidency), I celebrated Mass at Ciudad Juarez, on the border, and on the other side there were 50 bishops concelebrating and in the stadium there were many people. The problem was already there; it wasn’t just Trump but also the government before.”

Nevertheless, Pope Francis said the current wave of populist rhetoric against migrants was “creating psychosis” and that people seeking a better life should not be rejected.  Europe, he added, is facing a “great demographic winter” and, without immigration, the continent “will become empty.”

“Some governments are working on it, and people have to be settled in the best possible way, but creating psychosis is not the cure,” he said. “Populism does not resolve things. What resolves things is acceptance, study, prudence.”