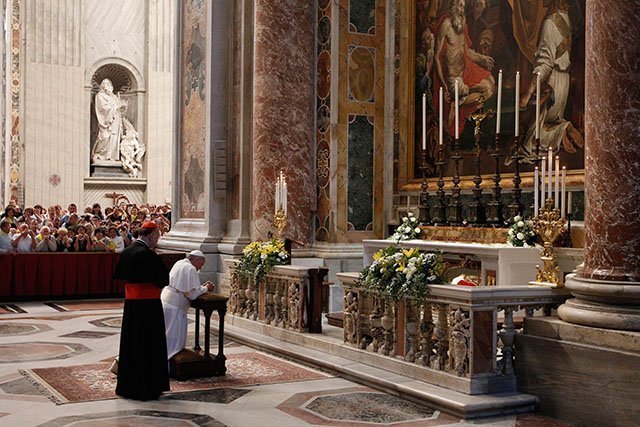 Pope Francis prays at the tomb of Saint John XXIII in St. Peter's Basilica at the Vatican in June, 2013.

VATICAN CITY (CNS) — Sympathizing with all the unknowns facing young people today, Pope Francis — half joking — said it is easier for a pope because he knows where his earthly life will end.

"I think the pope’s definitive path is more certain. Where will the pope end up? There, in that tomb," in St. Peter’s Basilica where most popes are buried, he said June 28 to a group of young men involved in a vocational discernment process run by the Diocese of Rome.

But that is not the way things turned out for St. Celestine V, who until 2013 was known as the last pope to voluntarily resign. When he renounced the papacy in December 1294, after only five months in office, his successor had him imprisoned. He died in custody and, eventually, his remains were interred in L’Aquila, the town where the cardinals had met and elected him pope.

Pope Francis opened a special Celestinian Year July 5 in Isernia, the southern Italian city that claims to be where St. Celestine was born 800 years ago. The date of Pope Francis’ visit was the anniversary of St. Celestine’s election as pope.

Standing outside Isernia’s cathedral, Pope Francis focused on Pope Celestine’s simplicity, his love for the poor and his ministry of proclaiming God’s mercy. The only mention of Pope Celestine’s resignation came in Pope Francis’ final prayer at the end of the 35-minute meeting.

The prayer praised God for choosing Pope Celestine and for having "inspired him to renounce the ministry of supreme pastor. Help us, inspired by him and with his intercession, to always seek your will in prayer and to faithfully safeguard our love for the church," the pope prayed.

Pope Celestine had issued a decree making it theoretically possible for a pope to voluntarily leave office. A week later, he invoked the decree, citing his lack of physical strength and desire to return to his life of prayer as a hermit. More than 700 years later, the possibility of papal resignations still is ensured in the law of the church, although it is not very detailed.

"If it happens that the Roman pontiff resigns his office, it is required for validity that the resignation is made freely and properly manifested but not that it is accepted by anyone," according to Canon 332.2 of the Code of Canon Law.

In office for more than 15 months, Pope Francis has not been coy about the possibility of a pope resigning. In fact, he has said that given how smoothly things have gone since Pope Benedict XVI shocked the world by resigning in February 2013, the position of retired pope has become "an institution."

On the way back from the Holy Land in May, he told reporters that Pope Benedict had "opened a door, a door to retired popes. Will there be others? God knows. But this door is open."

As for himself, he said, "I will do what the Lord tells me to do. Pray and seek God’s will."

"A pope who feels that his strength is failing — because these days we are living longer — has to ask the same questions Pope Benedict asked," he said.

However, on more than one occasion, Pope Francis also has mentioned the possibility of dying in office.

In an interview June 29 with the Italian television news station TGCom 24, Cardinal Angelo Comastri, archpriest of St. Peter’s Basilica, said "a few days ago" he and Pope Francis were walking in the grotto under the basilica and passed the chapel where the tomb of St. John Paul II had been before his beatification in 2011.

"He said, jokingly — but underneath his meaning was clear — he said, ‘Don’t forget, leave that one for me,’" the 70-year-old cardinal said. "And I, joking in return, said, ‘Holy Father, let’s see who gets there first.’"

Cardinal Comastri said it had nothing to do with the 77-year-old pope’s health, even though just a few days earlier the pope cancelled a visit to a hospital and university at the last minute. "For a Christian," the cardinal said, "physical death flings us into the arms of God… This is why the pope can be so serene about the prospect of his own death."

Such talk is not new for Pope Francis. As archbishop of Buenos Aires, he discussed the topic with two journalists for the 2010 book, "El Jesuita." Asked if he ever thought of his own death, he responded, "For a while now it’s been a daily companion of mine. I’m over 70 years old and the thread of life I have left on the reel isn’t long."

Cardinal Comastri told the television station: "Overall, his health is good. The pope is generous and sometimes he accepts more commitments than he has strength for, so once in a while he is forced to say, ‘I can’t do it anymore. I have to stop for a moment.’ But it’s just to catch his breath."

Pope Francis might not disagree with Cardinal Comastri’s diagnosis. Earlier in June, opening the annual Rome diocesan pastoral conference, the pope ended with his usual blessing and request that people pray for him. But he added, "My work is not easy" and, smiling, he said, "it’s a bit unhealthy."