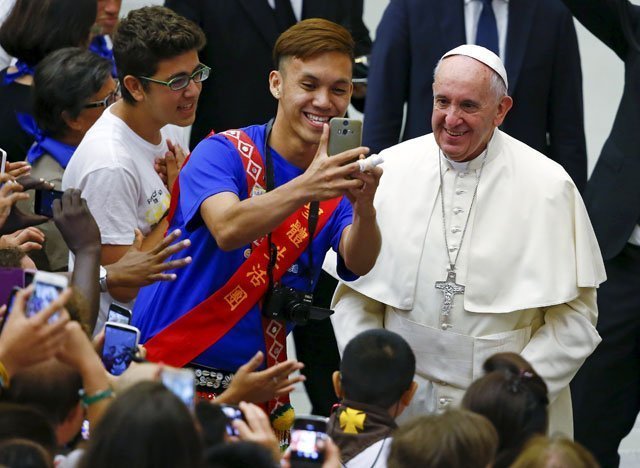 Pope Francis poses for a selfie during a special audience with members of the Eucharistic Youth Movement in Paul VI hall at the Vatican Aug. 7.
By Cindy Wooden
Catholic News Service
VATICAN CITY (CNS) — Following Jesus and doing the right thing gives believers a sense of peace, but sometimes "it comes wrapped in the cross," Pope Francis told a group of teenagers and young adults.
Asked Aug. 7 what his greatest challenge was as a Jesuit, Pope Francis responded that it was and continues to be "discernment," prayerfully seeking God’s will and doing it, which gives one a sense of peace.
About 1,500 members of the Eucharistic Youth Movement from 35 countries were meeting in Rome Aug. 4-10. The movement is the junior affiliate of the Apostleship of Prayer, a Jesuit-run outreach that has brought Catholics the popes’ monthly prayer intentions since 1890.
The Eucharistic Youth Movement, which is celebrating its 100th anniversary this year, has different programs designed specifically for young people ages 5 to 25. Through the formation of small groups and prayer experiences focused on the Eucharist, the Bible and discernment, the movement hopes to lead young people to a life of active church involvement and service.
Five young men and women from different countries asked Pope Francis questions at the gathering in the Vatican audience hall. As he often does on such occasions, the pope told the young people he had written out answers to the questions, which were submitted in advance, but decided to speak "from the heart" instead.
At a certain point, talking about the difference between being unafraid of tension and seeking it out, Pope Francis asked the young people, "Is this clear? No, it’s not clear. Let’s move on."
However, he did summarize that section of his talk.
"First, don’t be afraid of tension, because it helps you grow," the pope said. "Second, resolve tension with dialogue because dialogue unites, both in a family and with friends, and you’ll find a path for moving forward without losing your identity. Third, don’t become too attached to tension because this will harm you."
Conflicts can be positive because they help people understand their differences and learn to discuss them and reach a compromise, the pope said.
"It’s true: If I have a conflict with you and I kill you, the conflict’s over. But that is not the way," Pope Francis said.
On the question of discernment, Pope Francis said an experience of Jesus’ peace is a sure sign that a person is on the right path. But it isn’t always simple.
"You need to learn this and ask the Lord to help you discern real peace from false peace," he said. "Superficial peace, that peace that makes you a bit content, that’s superficial, comes from the enemy — the devil, eh?"
Deep inside, he said, a Christian will know if he or she has been fooled by the devil, who "makes you think this is the right path, but then he leaves you all alone."
The devil, he said, "will help you have a little fun, he will put on a bit of a circus for you, he will make you happy for a moment, but he will never give you the joy that only Jesus can give."
Speaking of family relationships and family tensions, Pope Francis urged the young people to honor their grandparents, visit them and ask them about what they have lived and seen in order to learn from them. They can surprise you, he said.
At a recent general audience, the pope said he saw a "little grandma" with "eyes that shone with joy." He stopped the popemobile and went to greet her.
He asked how old she was, he said, and she responded "92." He asked her what her secret for such a long and happy life was. "’You know,’ she told me, ‘I eat ravioli’ and she added, ‘I make them myself.’"
One of the young people asked the pope if he sees any signs of hope and joy in the church. The pope said, "Seeing young people like you who believe in Jesus present in the Eucharist, who believe that love is stronger than hatred and peace is stronger than war" is one sure sign of hope. "This gives me joy," he said.
The Eucharist, he said, is the place where Jesus is present and "at every Mass, he is there and saves us."
Every time one goes to Mass or prays before the Eucharist, he said, remember how his love was so great that he gave his life to save all people.
Mass is not just a ritual or ceremony, he said, but it is going "to Calvary where Jesus gave his life."
—
Copyright ©2015 Catholic News Service/U.S. Conference of Catholic Bishops.
www.catholicnews.com. All rights reserved. Republishing or redistributing of CNS content, including by framing or similar means without prior permission, is prohibited. You may link to stories on our public site. This copy is for your personal, non-commercial use only. To request permission for republishing or redistributing of CNS content, please contact permissions at cns@catholicnews.com.
Copyright © 2023 Catholic News Service, Inc. All rights reserved. Linking is encouraged, but republishing or redistributing, including by framing or similar means, without the publisher's prior written permission is prohibited.