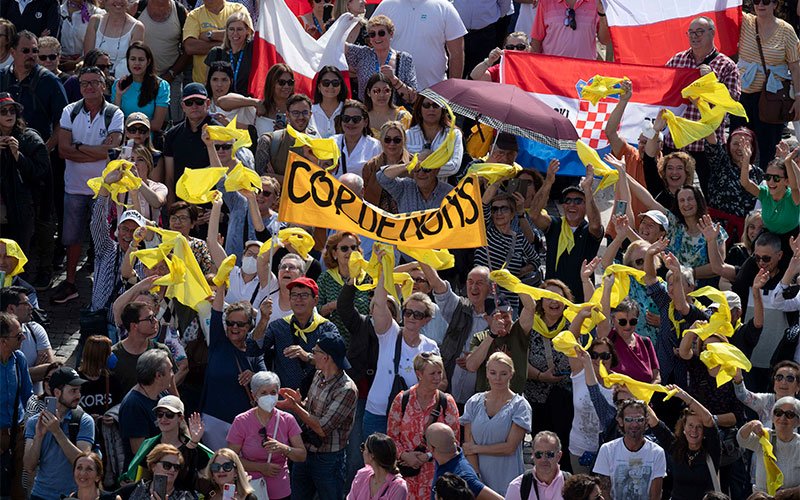 People in St. Peter's Square attend the Angelus led by Pope Francis from the window of his studio overlooking the square at the Vatican Oct. 2, 2022.

VATICAN CITY (CNS) — With “rivers of blood and tears” still flowing in Ukraine and with the increasing threat of the use of nuclear weapons, Pope Francis begged Russian President Vladimir Putin: “Stop this spiral of violence and death.”

With the situation being “so serious, devastating and threatening,” the pope did not offer his customary commentary on the day’s Gospel reading before reciting the Angelus prayer Oct. 2. Instead, he focused on the war and the “terrible and inconceivable wound” it is inflicting on humanity.

While constantly calling for peace and offering prayers for the victims since the war began in late February, the pope drew attention in his talk to “the serious situation that has arisen in recent days with further actions contrary to the principles of international law,” a clear reference to Putin’s announcement Sept. 30 that Russia was annexing four occupied territories in Ukraine.

The decision, the pope told people in St. Peter’s Square, “increases the risk of nuclear escalation to the point of fears of uncontrollable and catastrophic consequences worldwide.”

“My appeal is addressed first of all to the president of the Russian Federation, begging him to stop this spiral of violence and death, also for the sake of his people,” the pope said.

But “saddened by the immense suffering of the Ukrainian people as a result of the aggression suffered,” Pope Francis also appealed to Ukrainian President Volodymyr Zelenskyy “to be open” to any “serious peace proposals.”

The pope also asked world leaders “to do everything in their power to put an end to the ongoing war, without allowing themselves to be drawn into dangerous escalations, and to promote and support initiatives for dialogue.”

While remembering Ukraine’s “thousands of victims,” including children, the destruction and the displacement of millions of people, Pope Francis also spoke of specifics.

“Some actions can never be justified. Never!” the pope said.

“It’s distressing that the world is learning the geography of Ukraine through names like Bucha, Irpin, Mariupol, Izium, Zaporizhzhia and other towns that have become places of suffering and indescribable fear,” the pope said, referring to cities previously occupied by Russian troops and where mass graves were found once the areas were liberated.

“And what about the fact that humanity is once again faced with the atomic threat?” the pope asked. “It is absurd.”

“How much blood still must flow before we understand that war is never a solution, only destruction?” the pope asked thousands of people gathered in the square for the midday prayer.

“In the name of God and in the name of the sense of humanity that dwells in every heart,” he said, “I renew my call for an immediate ceasefire.”

Pope Francis prayed for a negotiated settlement of the conflict, one that is “not imposed by force, but agreed, just and stable.”

A just solution, he said, must be “based on respect for the sacred value of human life, as well as the sovereignty and territorial integrity of each country, and the rights of minorities and legitimate concerns.”