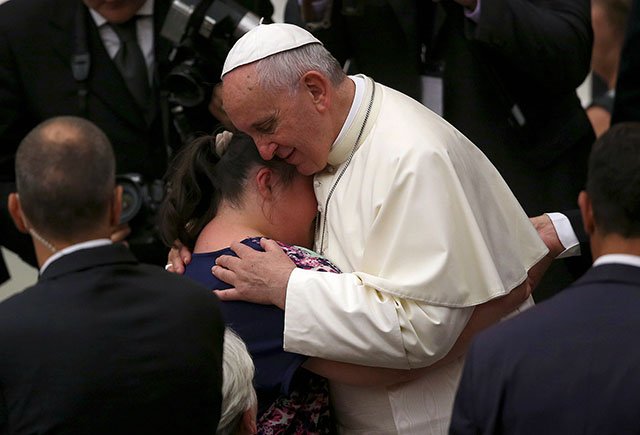 Pope Francis embraces a woman during his weekly audience in Paul VI hall at the Vatican Aug. 20.

VATICAN CITY (CNS) — Pope Francis, in mourning for the deaths of his nephew’s wife and two small children, thanked people at his weekly general audience Aug. 20 for their prayers.

After each of the priests who translate the pope’s words offered him condolences for the tragedy that struck his family, Pope Francis explained to the people: "The pope has a family, too. We were five siblings, and I have 16 nieces and nephews. One of these nephews was in an accident. His wife died along with his two small children — one who was 2 years old and the other several months."

The pope said that after the crash in the early morning hours Aug. 19, his 35-year-old nephew, Emanuel Horacio Bergoglio, "is in critical condition right now. I thank you, I thank you very much, for your condolences and prayers."

Memories, from the important to the light-hearted, took center stage at the pope’s audience with about 7,000 people gathered in the Vatican audience hall.

Seated on the stage, among the visiting bishops, was a delegation representing the players and coaches of the soccer team that has been the pope’s favorite since he was a small child. They brought along the massive Copa Libertadores trophy testifying to their Aug. 13 win in the championship of Latin American clubs. They also brought a copy of the trophy for the pope to keep.

Greeting Spanish-speakers at the audience, Pope Francis gave a special shoutout to the team, "the champions of America," and a team "that is part of my cultural identity."

On the flight back from Seoul Aug. 18, an Argentine journalist asked the pope what he thought about his team winning.

"San Lorenzo is the team my whole family cheered for," the pope responded. "As children we went, even mom went" to their games. "I remember as if it were today the 1946 season when San Lorenzo had a brilliant team and were champions."

As is customary at the first general audience after a foreign trip, Pope Francis shared reflections on his Aug. 14-18 visit to South Korea.

"The meaning of this apostolic visit can be summarized in three words: memory, hope and witness," he said.

The church, he said, "is the custodian of memory and hope. It is a spiritual family in which the adults transmit to the young the flame of faith received from their ancestors; the memory of the witnesses of the past become a new witness in the present and hope for the future."

Pope Francis said that his beatifying 124 Korean martyrs and meeting young people from many countries gathered for Asian Youth Day, brought memory, hope and witness together.

"Youths are people seeking something worth living for, and martyrs give a witness of something, or rather someone, for whom it is worth giving one’s life," he said. "This reality is love, it’s God who became flesh in Jesus."

The pope also spoke about how Christianity came to Korea in the 1700s through young laypeople reading about Christ, traveling abroad to be baptized, then baptizing others, initially without priests. The young people tried to live like the earliest Christians did, "practicing fraternal love that overcame every social distinction" and promoting sharing and care for the poor.

"The history of the faith in Korea demonstrates how Christ does not annul cultures; he does not suppress the journey of peoples who through centuries and millennia have sought the truth and practiced love for God and their neighbors," he said. "Christ does not abolish that which is good, but brings it to completion."

On the other hand, he said, Christ does "combat and defeat" evil, which sows division between peoples and "generates exclusion because of the idolatry of money."

During the audience, the pope prayed again for reconciliation and reunification between North and South Korea, and he asked people to continue to pray "for all persecuted Christians in the world, particularly in Iraq, and for those non-Christian religious minorities who equally are being persecuted."

Greeting his visitors, Pope Francis singled out a French couple and their six children who traveled on foot to Rome on a pilgrimage with two donkeys. "They didn’t let the donkeys inside?" he asked them. The animals were outside, tied to scaffolding on a Vatican building.