Pope: Time is now to create culture of care for each other, planet - Catholic Courier 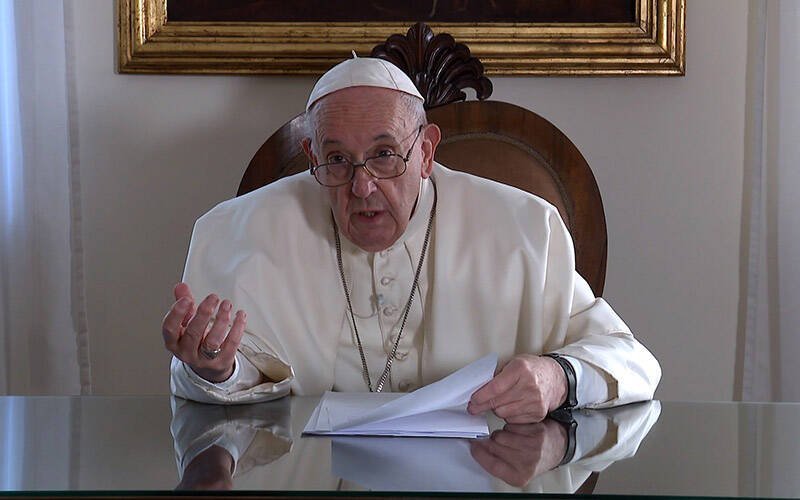 VATICAN CITY (CNS) — Pope Francis praised and encouraged young climate activists in their efforts to build a more fraternal society that cares for the environment.

“There must be harmony between people, men and women, and the environment. We are not enemies; we are not indifferent. We are part of this cosmic harmony,” he said in a video message.

“It is time to make wise decisions so that we can make use of the many experiences gained in recent years, in order to make possible a culture of care, a culture of responsible sharing,” he said, encouraging them to keep working for the good of humanity.

The pope’s message Sept. 29 came during a “Youth4Climate” gathering in Milan Sept. 28-30, ahead of the U.N. Climate Change Conference, called COP26, in Glasgow in November.

Hundreds of young climate leaders from all around the world, including Greta Thunberg, were in attendance — along with government policymakers — to propose ideas and concrete proposals on some of the most urgent issues on the climate agenda.

The pope’s message was broadcast Sept. 29 during an afternoon session of presentations by a number of government ministers of education, speaking about the importance of climate education.

He encouraged young people to combine their efforts “through an extensive educational alliance to form decent, mature generations, capable of overcoming fragmentation and rebuilding the fabric of relationships so that we can achieve a more fraternal humanity.”

“I would like to thank you for your dreams and good projects, and for the fact that you are as concerned about human relations as you are about caring for the environment. Thank you. It is a concern that is good for everyone,” he said.

“This vision is capable of challenging the adult world, for it reveals that you are prepared not only for action, but also for patient listening, constructive dialogue and mutual understanding,” the pope said.

He said the Global Compact on Education, launched in 2019, “aims to provide shared responses to the historical change that humanity is experiencing and that has been made even more evident by the pandemic.”

“Technical and political solutions are not enough if they are not supported by the responsibility of each member and by an educational process that favors a cultural model of development and sustainability centered on fraternity and on the alliance between human beings and the environment,” he said.

The pope reiterated his appeal for concrete action in caring for creation in a written message he sent to high-level talks underway at the parliamentary assembly of the Council of Europe. Among a number of issues, delegates were discussing, “The environment and human rights: the right to a safe, healthy and sustainable environment,” as part of their fall session in Strasbourg Sept. 27-30.

The assembly’s current president, Rik Daems, said Sept. 29 that “It is clear a healthy environment is essential for all of us — but it must become a legally enforceable right if we are to make the huge changes our planet needs.”

The pope said the Vatican would be interested in seeing whether the Council of Europe will decide to create “a new legal instrument to link the care of the environment to the respect of fundamental human rights.”

“There is no more time to wait; we must act. Any instrument that respects human rights, the principles of democracy and the rule of law — all fundamental values of the Council of Europe, can be useful to face this global challenge,” he said.

When people think of themselves as “the lord of the universe and not as its responsible stewards,” then they will find ways to “justify any kind of waste, both environmental and human, and treat other people and nature as mere objects,” Pope Francis said.

People should consume what they need to live, “not live to consume,” especially the kind of unbridled consumption seen today, he said.

“Everything is connected and, as a family of nations, we must have a common concern: to see that the environment is cleaner, purer and preserved. And to take care of nature so that it takes care of us,” he said.

There needs to be “a real change of course, a new awareness of the relationship of the human being with himself, with others, with society, with creation and with God,” he said.

“Let us act with hope, courage and willingness, making concrete decisions. They cannot be put off until tomorrow, if their purpose is to protect the common home and the dignity of every human being,” he said.