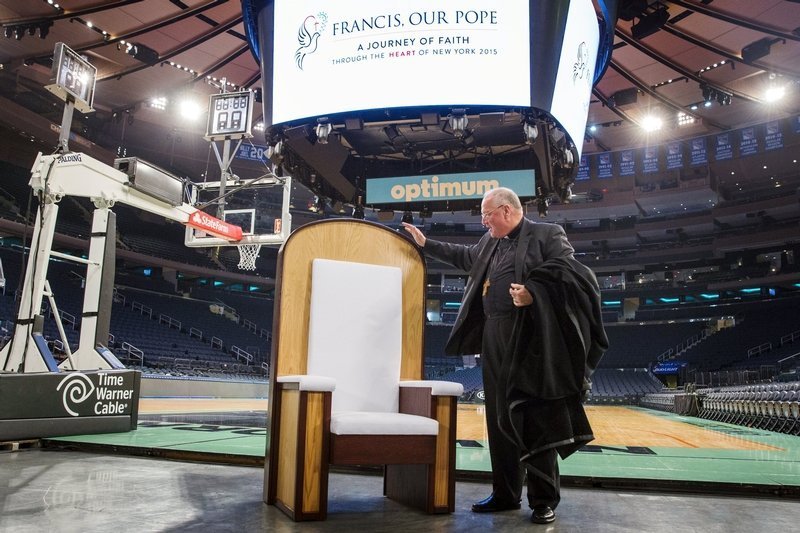 Cardinal Timothy M. Dolan of New York speaks Sept. 2 about a chair Pope Francis will use when he celebrates Mass in Madison Square Garden. The Mass is set for Sept. 25.
By Beth Griffin
Catholic News Service
NEW YORK (CNS) — A “simple weekday Mass” is in the works when Pope Francis celebrates the liturgy with 20,000 people at Madison Square Garden during his U.S. visit.
“Simple” takes on a new dimension when the pope is the celebrant and the congregation clears security checkpoints hours before the opening notes of the entrance hymn at the Sept. 25 celebration.
“In substance, every Mass is the same. This one is a little bit more elaborate,” New York Cardinal Timothy M. Dolan said of the archdiocese’s planning effort Sept. 2.
The liturgical option for the day is the Mass for Peace and Justice, Cardinal Dolan said, explaining that the choice reflects the “high emphasis Pope Francis puts on this, and because that day he will be at the United Nations and also visit two sites in the archdiocese devoted to that.”
“The readings and prayers are a given,” Cardinal Dolan said. But the music, the gifts, the intercessions, the readers and other elements have been carefully selected to represent the diverse “languages, families, apostolates, parishes and ministries of this vast region,” he said.
Father Matthew Ernest, director of the archdiocesan Office of Liturgy, told Catholic News Service, that some of the liturgical options selected “will make it more like a simple weekday Mass,” including eliminating the Gloria and the Creed and using only one reading before the Gospel.
Father Ernest said the first reading will be in Spanish, the Gospel will be sung in English, and Pope Francis will offer the second eucharistic prayer in Latin. He is expected to preach the homily in English and Spanish. Intercessions will be made in English, Spanish, Polish, Gaelic, German Tigrinya and Italian.
The liturgist said the pope will concelebrate the Mass with cardinals, bishops from the New York province and an as-yet-undetermined number of local priests. Other participants include “faithful parishioners” who represent communities or ministries and seminarians studying at St. Joseph’s Seminary in Yonkers, New York.
“The seminarians will be the servers and, as you can imagine, they’re thrilled,” Father Ernest said. “We’re putting all the seminarians to work. They’re not simply attending the event. Some are singing, some are serving, some will direct traffic in the halls.”
Jennifer Donelson, director of sacred music at the seminary, said 10 seminarians from the school’s Schola choir will sing the communion antiphon.
Father Ernest said the Vatican made few requests beyond keeping the liturgy simple. The Vatican asked that the gifts be presented by a multigenerational family, he said.
Initial planning for the papal Mass began in April, Father Ernest said. He consulted with the priest who planned Pope Benedict XVI’s Mass in Washington in 2008. Volunteers were recruited and committees formed. Father Ernest praised the work of the committee members and their willingness to review the event’s details.
“This is Mass on a stage. It requires forethought with regard to the movement and placement of people,” he said.
One of the challenges is providing for the distribution of Holy Communion to 20,000 people, Father Ernest said.
More than 200 permanent deacons from the archdiocese and the dioceses of Brooklyn and Rockville Centre will be deployed throughout Madison Square Garden as eucharistic ministers. They will be assisted by 150 volunteers from groups including the Knights of Columbus, Knights of Malta, Knights of the Holy Sepulchre and Ancient Order of Hibernians.
Father Ernest said immigrant women from the Obreros Unidos Mission in Yonkers are embroidering the altar linens and purificators.
Many of the items used at the Mass may look familiar. The simple ciboria will be the same design as those used for Pope Benedict XVI’s Mass at Yankee Stadium. Their lids have a commemorative inscription and the sides bear the papal coat of arms and the seal of the archdiocese. As in 2008, they will be given to New York parishes after the visit.
Pope Francis will use the same chalice Pope Blessed Paul VI used when he celebrated Mass in Yankee Stadium Oct. 4, 1965. It is currently on display at St. Joseph’s Seminary. Cardinal Dolan said the Holy Father will carry a pastoral staff that is a replica of one used in New York by Paul VI, John Paul II and Benedict XVI.
Speaking courtside at Madison Square Garden, the cardinal unveiled the oak presider’s chair Pope Francis will use at the Mass. It was built by immigrant day laborers from the Don Bosco Workers, Inc. in Port Chester, New York.
“The chair is very important in Catholic imagination,” Cardinal Dolan said. “It is a great symbol of unity and the teaching authority the pope has.”
He described the wooden chair as “very simple, with no designs,” according with the wishes of the pope.
Jennifer Pascual, director of music at St. Patrick’s Cathedral, told CNS that the music for the Mass will be provided under her direction by 115 members of two choirs — New York Archdiocesan Festival Chorale and the Cathedral Choir of St. Patrick’s — and a 40-person orchestra.
The orchestra is being assembled with the help of a contractor, she said, and is comprised of “a lot of faith-filled people who are excited to be here.”
Pascual commissioned some music, but generally chose pieces that will be familiar to the worshippers and encourage participation. Some of the selections are multilingual. “I’m trying to make it as congregational-friendly as possible,” she said.
Copyright © 2023 Catholic News Service, Inc. All rights reserved. Linking is encouraged, but republishing or redistributing, including by framing or similar means, without the publisher's prior written permission is prohibited.