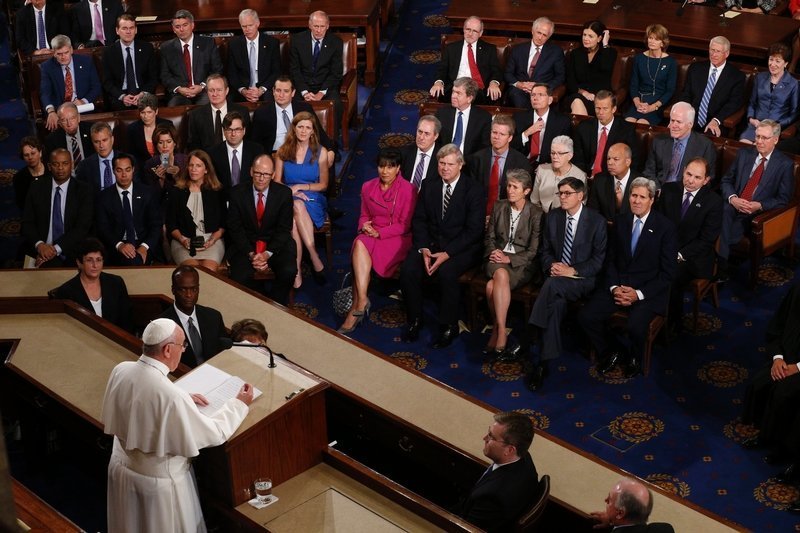 Pope Francis addresses a joint meeting of Congress at the U.S. Capitol in Washington Sept. 24. In the first such speech by a pope, he called on Congress to stop bickering as the world needs help.

WASHINGTON (CNS) — The past, the promise and the potential of the United States must not be smothered by bickering and even hatred at a time when the U.S. people and indeed the world need a helping hand, Pope Francis told the U.S. Congress.
Making history by being the first pope ever to address a joint meeting of Congress, Pope Francis was introduced to the legislators by the House sergeant at arms Sept. 24 as: "Mr. Speaker, the pope of the Holy See."
The pope introduced himself, though, as a son of the American continent, who had been blessed by the "new world" and felt a responsibility toward it.
In a long speech, he gave the sense that he sees the United States as a country divided, one so focused on calling each other names that it risks losing sight of how impressive it can be when its people come together for the common good. That is when it is a beacon of hope for the world, he said.
Pope Francis condemned legalized abortion, the death penalty and unscrupulous weapons sales. He called on Congress to "seize the moment" by moving forward with normalizing relations with Cuba. And, again referring to himself as a "son of immigrants" — and pointing out that many of the legislators are, too — he pleaded for greater openness to accepting immigrants.
A reporter had asked the pope in July about why he spoke so much about the poor and about the rich, but rarely about the lives and struggles of the hard-working, tax-paying middle class. The result of a papal promise to correct that was the speech to Congress and through Congress to the American people.
"I would like to take this opportunity to dialogue with the many thousands of men and women who strive each day to do an honest day’s work, to bring home their daily bread, to save money and — one step at a time — to build a better life for their families," the pope said.
Pope Francis’ in Washington, D.C.
"These are men and women who are not concerned simply with paying their taxes, but in their own quiet way sustain the life of society," he said.
"They generate solidarity by their actions, and they create organizations which offer a helping hand to those most in need."
Showing he had studied the United States before the visit — something he said he would do during the Rome August break — he used four iconic U.S. citizens as relevant models of virtue for Americans today: Abraham Lincoln, the Rev. Martin Luther King Jr., Dorothy Day and Thomas Merton.
"A nation can be considered great when it defends liberty as Lincoln did; when it fosters a culture which enables people to ‘dream’ of full rights for all their brothers and sisters as Martin Luther King sought to do; when it strives for justice and the cause of the oppressed as Dorothy Day did by her tireless work; the fruit of a faith which becomes dialogue and sows peace in the contemplative style of Thomas Merton," the pope said.
Describing political service with the same tone used to describe a vocation to religious life — "you have been invited, called and convened by those who elected you" — the pope recognized the weighty responsibility of being a member of the U.S. Congress.
Dialogue, he said, is the only way to handle the pressure and fulfill the call to serve the common good, promoting a culture of "hope and healing, of peace and justice." 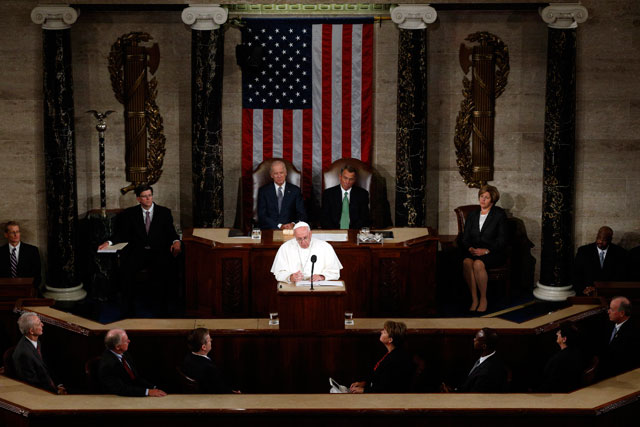 Pope Francis addresses a joint meeting of Congress at the U.S. Capitol in Washington Sept. 24. In the first such speech by a pope, he called on Congress to stop bickering as the world needs help.

For the speech, Pope Francis stood in the House chamber in front of Rep. John Boehner, speaker of the House and a Republican from Ohio, and Vice
President Joe Biden, president of the Senate. Both men are Catholics. Besides the senators, representatives and their invited guests, the attendees included members of the U.S. Supreme Court and members of President Barack Obama’s Cabinet.
Tens thousands of people watched the speech on giant screen from the Capitol’s West Lawn. Gathered hours before the pope’s morning visit, they were entertained by military bands.
In his speech, Pope Francis gave strong support to several concerns of the U.S. Conference of Catholic Bishops and Catholic faithful, including defending the right of people to publicly live their faith and join political policy debates from a faith-based perspective.
"It is important that today, as in the past, the voice of faith continue to be heard, for it is a voice of fraternity and love, which tries to bring out the best in each person and in each society," he said. The dialogue the country needs must be respectful of "our differences and our convictions of conscience."
"Every life is sacred," he insisted, calling for the "global abolition of the death penalty" and the "responsibility to protect and defend human life at every stage of its development."
Some U.S. politicians and pundits have expressed confusion or even anger over Pope Francis’ teaching about the damage provoked when money becomes a god and profits count more than people. The pope insists his words are straight out of Catholic social teaching.
His speech to Congress included more of that teaching, delving deeper into the positive aspects of a market economy — as long as it is ethical and includes controls, solidarity and a safety net for the poorest and weakest members of society.
"The creation and distribution of wealth" obviously is important for continued efforts to reduce poverty in the United States and around the globe, he said. "The right use of natural resources, the proper application of technology and the harnessing of the spirit of enterprise are essential elements of an economy which seeks to be modern, inclusive and sustainable."
"Business is a noble vocation" when it seeks the common good, Pope Francis said. And today, he told legislators, the common good includes protecting the environment and taking bold steps "to avert the most serious effects of the environmental deterioration caused by human activity."
– – –
Follow Wooden on Twitter @Cindy_Wooden.
Copyright © 2022 Catholic News Service, Inc. All rights reserved. Linking is encouraged, but republishing or redistributing, including by framing or similar means, without the publisher's prior written permission is prohibited.