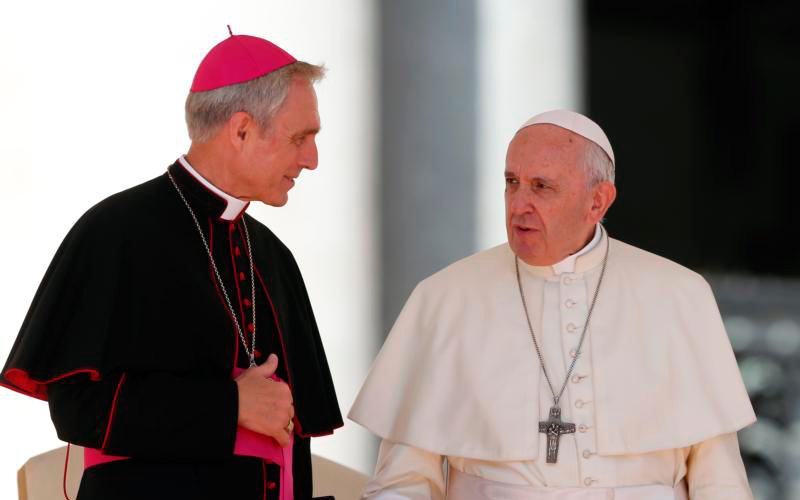 Pope Francis talks with Archbishop Georg Ganswein, prefect of the papal household, during his general audience in St. Peter's Square at the Vatican Sept. 12. (CNS photo by Paul Haring)

VATICAN CITY (CNS) — Pope Francis is calling the presidents of every Catholic bishops’ conference in the world to Rome Feb. 21-24 to discuss the prevention of the abuse of minors and vulnerable adults.

The Vatican made the announcement Sept. 12 after the pope and members of his international Council of Cardinals wrapped up three days of meetings.

After hearing from his council, the pope “decided to convoke a meeting with the presidents of the bishops’ conferences of the Catholic Church on the theme of the protection of minors,” the council said in a written communique.

The members present “extensively reflected together with the Holy Father on the matters of abuse” during their deliberations Sept. 10-12. Cardinal Sean P. O’Malley of Boston, president of the Pontifical Commission for the Protection of Minors, also updated those present with the commission’s ongoing efforts.

Three of the nine council members were absent for the meetings: Cardinal George Pell, 77, who currently is on trial in Australia on sex abuse charges; Cardinal Francisco Javier Errazuriz Ossa, 85, retired archbishop of Santiago, Chile, who is facing questioning over his handling of abuse allegations; and Cardinal Laurent Monsengwo Pasinya of Kinshasa, Congo, who turns 79 in early October.

The papally appointed group of nine cardinal members, the so-called C9, has been tasked with helping advise the pope on the reform of the Vatican’s organization and church governance.

The council said in its communique that, concerning work on the reform of the Curia, it finished “rereading the texts already prepared (and) also called attention to the pastoral care of personnel who work there,” in the Roman Curia.

Paloma Garcia Ovejero, vice director of the Vatican press office, told reporters that a major part of the council’s work was making final changes to the draft of the apostolic constitution that would govern the Curia.

Pope Francis reviewed for his considerations the finalized draft at their last meeting in June. The draft document emphasizes four points: the Curia is at the service of the pope and the local churches throughout the world; the work of the Curia must have a pastoral character; the new section in the Vatican Secretariat of State would oversee the training, assigning and ministry of Vatican nuncios and diplomats around the world; and the proclamation of the Gospel and a missionary spirit must characterize the activity of the Curia.

Garcia Ovejero reiterated the council’s last written statement from Sept. 10 in which the members asked Pope Francis for a reflection on “the work, structure and composition of the council itself, also taking into account the advanced age of some of its members.”

The six again “expressed full solidarity with Pope Francis for what has happened in the last few weeks,” she said.

In response to questions, she said there was no word yet on the expected release of the “possible and necessary clarifications” the council said were being formulated by the Holy See given the current debate on abuse in the church.