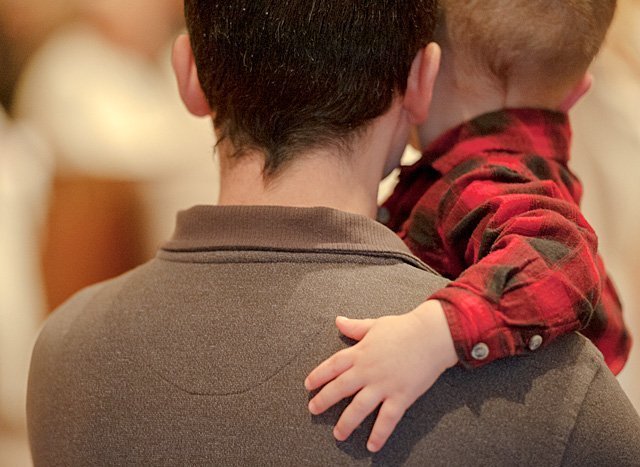 VATICAN CITY (CNS) — When their lives are all work and no play, men turn their children into "orphans" who lack a father to guide them, show them love and teach them values, Pope Francis said.

"They are orphans in a family because their fathers are often absent, also physically, from home, but above all because when they are home they don’t act like fathers, they don’t dialogue with their children, they don’t fulfill their role as educators, they don’t give their children, by way of their example and their words, those principles, values and rules of life that they need like bread," he said.

At his general audience Jan. 28, the pope continued a series of talks on the family by focusing on the role of the father.

Speaking to some 7,000 people gathered in the Paul VI audience hall, the pope said that in the past, fathers were sometimes too authoritarian, treating their children like "servants" and not helping them take responsibility for forging their own way in life.

"However, as often happens, we have gone from one extreme to another," the pope said.

"The problem today does not seem to be so much the overbearing presence of fathers as much as it is rather their absence, their hiding" from their responsibility as parents, he said.

The world today, especially in the West, seems like "a world without fathers" where men are so focused on their jobs or personal fulfillment that they neglect their families, he said.

The pope recalled how when he served as archbishop of Buenos Aires he would often ask fathers if they played with their kids, "if they had the courage of love to ‘waste’ their time with their children. And their answer was awful, you know. The majority said, ‘Well, I can’t, too much work.’"

Christian communities need to be extra attentive to the crisis of fatherhood in society today and how so many young people feel "orphaned" within their own families, the pope said. So many problems kids have, some of them serious, stem from them not having a decent father figure — a father who is an authoritative, loving guide and role model, he added.

In fact, the more a father needs to work or be away from home, the more important it is he live up to his duty of providing solid, quality guidance, he said.

Another problem, the pope said, is sometimes fathers seem lost or unsure of what role they are supposed to play in the family and "so, being in doubt, they opt out, they withdraw and neglect their responsibilities, perhaps hiding behind a dubious relationship of ‘equal footing’ with their children," he said.

While it is true fathers need to accompany their kids, he said, they must not forget they must act like a parent, not a best friend because "that is not good for the child."

Society has a paternal role as well, he said; it must take an active, responsible role toward young people and not leave them "orphans" without prospects for a good education and employment.

Young people who are "orphaned of ideals," values and hope, the pope said, will fill that void with "idols" and be driven by fleeting pleasures and the illusion of "the god of money," robbing them of their real treasures within.

Jesus, who promised he would not leave anyone behind as an orphan, is the teacher that can guide families, he said. He is "the hope that the world can change, that love conquers hatred and that there can be a future of brotherhood and peace for everyone."

Toward the end of the audience, the pope said some people might think his catechesis was "too negative" by looking only at the failures in fatherhood today.

But he promised the following week’s catechesis would look at the beauty of fatherhood, echoing the audience’s Gospel reading from John 3:17: "For God did not send his Son into the world to condemn the world, but that the world might be saved through him."

The pope said he wanted "to start with the darkness in order to arrive at the light so that the Lord can help us understand these things better."

The text of the pope’s audience remarks in English is available online at www.vatican.va/holy_father/francesco/audiences/2014/documents/papa-francesco_20150128_udienza-generale_en.html.

The text of the pope’s audience remarks in Spanish is available online at www.vatican.va/holy_father/francesco/audiences/2014/documents/papa-francesco_20150128_udienza-generale_sp.html.