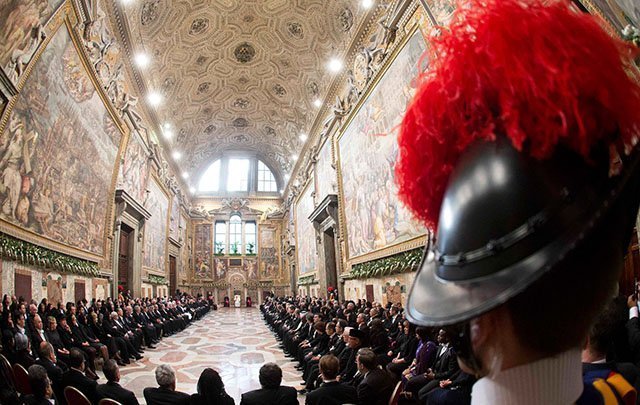 A Swiss Guard keeps watch as Pope Francis speaks during an audience with the Vatican diplomatic corps Jan. 12.

VATICAN CITY (CNS) — Highlighting some of the most urgent conflicts facing the world, Pope Francis said such strife and injustices were rooted in a culture of rejection that refuses to recognize God, to protect nature and to respect other human beings.

In a wide-ranging speech Jan. 12 to diplomats accredited to the Vatican, the pope urged the world’s governments and individuals to work "to end every form of fighting, hatred and violence, and to pursue reconciliation, peace and the defense of the transcendent dignity of the human person."

He harshly condemned the "falsification of religion," which seeks to justify violence in the name of God and called for "heartfelt conversion," stressing that it was only a "sincere faith in God" that generates peace and dialogue.

The extremist terrorism in Syria and Iraq, he said, "is a consequence of the throwaway culture being applied to God."

"Religious fundamentalism, even before it eliminates human beings by perpetrating horrendous killings, eliminates God himself, turning him into a mere ideological pretext," he said.

The pope appealed to the world community to take unanimous action "within the framework of international law" to not only protect victims, but to end the conflicts and restore harmony.

People have chosen to become slaves, he said, "whether to the latest fads, or to power, money or even deviant forms of religion" because their hearts have become "corrupt," and they are "incapable of recognizing and doing good of pursuing peace."

The pope’s annual speech looked both at signs of promise and areas of concern around the globe, including the recent slaughter of children in Pakistan, the "tragic slayings" in Paris, the "brutality" and kidnappings in Nigeria, and "the spread of fundamentalist terrorism in Syria and in Iraq."

The world community must not remain indifferent to the expulsion of Christian minorities in the Middle East, he said, and leaders, especially Muslims, must "condemn all fundamentalist and extremist interpretations of religion which attempt to justify such acts of violence."

Christians play "a fundamental role as artisans of peace, reconciliation and development" in their communities, and a "Middle East without Christians would be a marred and mutilated Middle East," he said.

The past year also saw some success stories, the pope said, as he praised the recent rapprochement between the United States and Cuba, calling it "one example close to my heart of how dialogue can build bridges."

He also highlighted his satisfaction that the United States was taking steps to shut down the Guantanamo detention facilities and thanked those countries that have shown a "generous willingness" to receive the detainees.

The pope’s 34-minute speech was an extension of his hallmark diagnosis of the world’s ills as being rooted in a "throwaway culture, which spares nothing and no one: nature, human beings, and God himself. It gives rise to a humanity filled with pain and constantly torn by tensions and conflicts of every sort."

Linked to this throwaway culture, he said, is a "mentality of rejection" and enslavement, which spurs nothing but conflict in "bits and pieces" around the world and in communities.

The Christmas season offered an added opportunity to reflect on the "attitude we all share" of rejection — seeing others not as brothers and sisters, but as rivals, unworthy of attention or objects "to be bent to our will."

The story of Christ is filled with moments of rejection, starting immediately with his birth as he, like many today, was "cast aside, left out in the cold, forced to be born in a stable since there was no room in the inn."

Christ, like many refugees, was forced to live in exile to escape the slaughter of countless innocents, a tragedy repeated just a month ago in Pakistan, the pope said.

People continue to flee their homelands and many become victims to "unscrupulous and greedy thugs" who put people’s lives in danger with "cruel journeys" to supposed safety.

The pope made special mention of "the alarming fact" that many people who immigrate in "the Americas" are unaccompanied minors, who are even more at risk and are "in need of greater care, attention and protection."

While many of these tragedies make media headlines, there are plenty of "hidden exiles" and victims who face rejection, even in one’s own home, he said, like the elderly, the sick, the disabled and the young, particularly as they face unemployment and a lack of opportunity.

The family is often seen as "disposable" in today’s individualistic and self-centered culture, he said, resulting in fragile unions and "a dramatic fall in birthrates."

This selfish mentality affects legislation, too, he said, as it tends to benefit "various forms of cohabitation rather than adequately supporting the family for the welfare of society as a whole."

The pope also harshly condemned the "horrendous crime, the crime of rape" as an extremely serious "offense against the dignity of women, who are not only violated in body, but also in spirit."

Peace is not just a gift of God, he said, it is also a personal and social duty that demands "commitment and concern" from everyone.

He recalled how from the "ashes of that immense tragedy" of World War II, a renewed desired for peace and dialogue was born in the form of the United Nations, which marks its 70th anniversary this year.

People can agree to vow to change the future and never again turn to war, he said, citing Pope Paul VI’s speech to the U.N. in 1965.

While Pope Francis said he hoped there soon would be agreement over Iran’s use of nuclear energy for peaceful purposes, he added that the drafting of a new climate change agreement was especially urgent this year as well as an adoption of Sustainable Development Goals.

The pope noted he was set to leave later the same day for a visit to Sri Lanka and the Philippines. He said his second trip to Asia was "a sign of my interest and pastoral concern for the people of that vast continent."

He emphasized how the Vatican was at the disposal of all governments to contribute to the common good, especially in seeing a resumption of talks between the "sister countries" of North and South Korea.