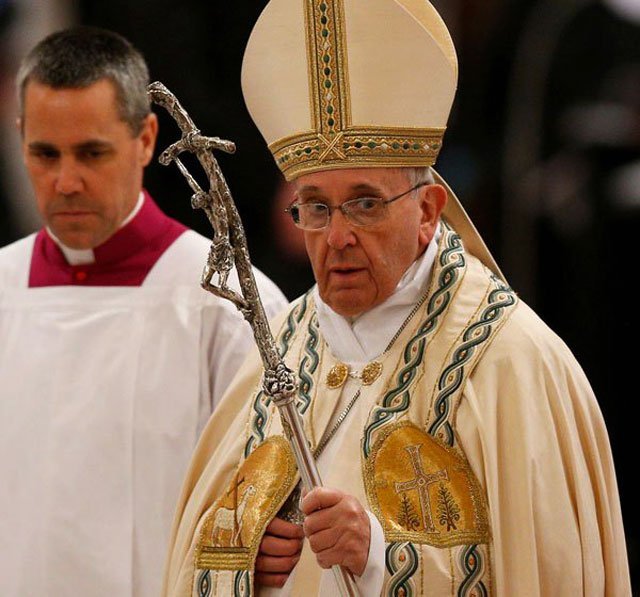 VATICAN CITY (CNS) — Pope Francis urged Franciscan friars to hold true to their charism of fraternity, humility and poverty and not lose the respect they have earned over the centuries for living up to those ideals.

The more one feels small before God and in need of his mercy, "the closer we are to salvation; the more we are convinced of being sinners, the more we are willing to be saved," he said in an audience May 26 with 200 Franciscan leaders.

The pope met with the delegates to the general chapter of the Order of Friars Minor — the formal name of the order — during their meeting May 10-June 7 in Assisi, Italy.

The general chapter focused on how Franciscans can live their identity of "minority" and "fraternity" more fully in the world today.

U.S. Franciscan Father Michael Perry, who was re-elected head of the order May 21, told the pope that the Franciscans strive to proclaim the joy of the Gospel and be a force for peace and justice in the world.

"Sometimes, however, our life’s witness may waver, making us not very credible. As you well know, Holy Father, our adherence to the charism of minority and poverty was lacking recently," he said.

Following the Gospel is the only solid foundation on which to build, Father Perry said, and "we ask the Lord to heal with his Holy Spirit the wounds these events have inflicted on brotherly trust."

The pope underlined the importance of restoring mutual trust among the Franciscans so that "the world may see and believe, recognizing that Christ’s love" brings healing and unity.

Setting aside his text, Pope Francis told the delegates how much "the people of God love you."

He recalled how the late Cardinal Antonio Quarracino of Buenos Aires, his predecessor before he became archbishop in 1998, used to tell him how respected Franciscans were even by those with strong anti-clerical feelings.

"In cities there are groups or individuals who are a bit ‘priest-bashers.’ When a priest walks by they say things, like ‘crow’ — this is what they say in Argentina," he said, meaning someone unscrupulous or heartless.

"Because you have inherited good standing in the people of God with this minority, with fraternity, with meekness, with humility, with poverty. Please preserve this; do not lose it. The people care about you, they love you."

Reading from his prepared speech, the pope said it was very important to live the Gospel values "without getting lost in disputes and gossip."

But it also meant using resources in an ethical and transparent way that helps others.

"If you are attached to goods and riches of the world," the pope said, "it will be the Lord himself to strip you of this worldly spirit in order to preserve this precious patrimony of minority and poverty to which he called you through St. Francis. Either you are freely poor and minor or you will end up stripped" of everything.

When consecrated men and women let themselves be "illuminated and guided" by the Holy Spirit, they discover "the secret to their fraternity, the inspiration for their service to their brothers and sisters, the strength of their prophetic presence in the church and the world."