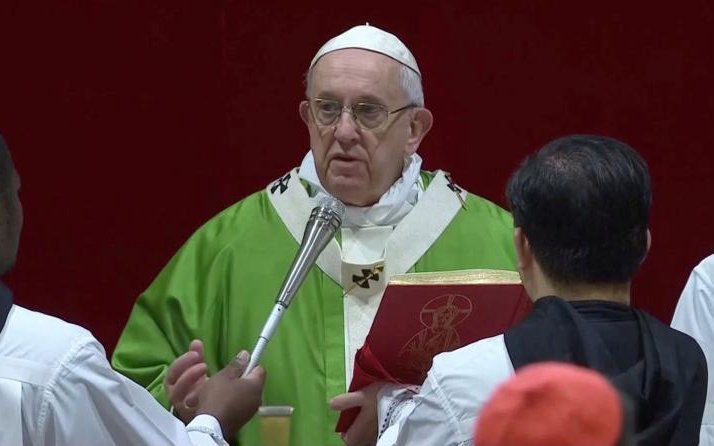 Pope Francis celebrates a Mass on the last day of the four-day meeting on the protection of minors in the church at the Vatican Feb. 24, 2019, in this image taken from Vatican television. (CNS photo by Vatican Television via Reuters)

VATICAN CITY (CNS) — Pope Francis will issue a document on “young people, faith and vocational discernment” five months after the world Synod of Bishops gathered to discuss the topic.

The Vatican announced Feb. 24 that the pope will present his post-synodal apostolic exhortation March 25, the feast of the Annunciation, during a visit to the Shrine of Our Lady of Loreto near Italy’s central Adriatic coast.

The synod, which was held in October, brought together more than 300 bishops, religious men and women, lay leaders and young people from around the world.

At the end of the meeting, the voting members — mostly bishops — issued a long document summarizing their discussions and urging all Catholics, at all levels of the church’s life, to improve the way they listen to young people, taking their questions seriously, recognizing them as full members of the church, patiently walking with them and offering guidance as they discern the best way to live their faith.

The synod itself and the final document looked at how, in many parts of the world, young people are abandoning the church or question its teachings, especially on sexuality.

The church’s response, the synod said, must be a commitment of time and patience as it helps young people “grasp the relationship between their adherence to faith in Jesus Christ and the way they live their affectivity and interpersonal relationships.”

Synod speakers and the document itself emphasized the one “vocation” of all Christians is the call to holiness and how that vocation can and should be lived out in every state of life: young or old, single or married or in the priesthood or religious life.

God calls each person into a relationship with him, respects the person’s freedom and yet has a plan for each person’s life, the document said; discovering that plan requires prayer and self-examination — discernment, in other words — which usually involves the assistance of a wise and trusted guide.