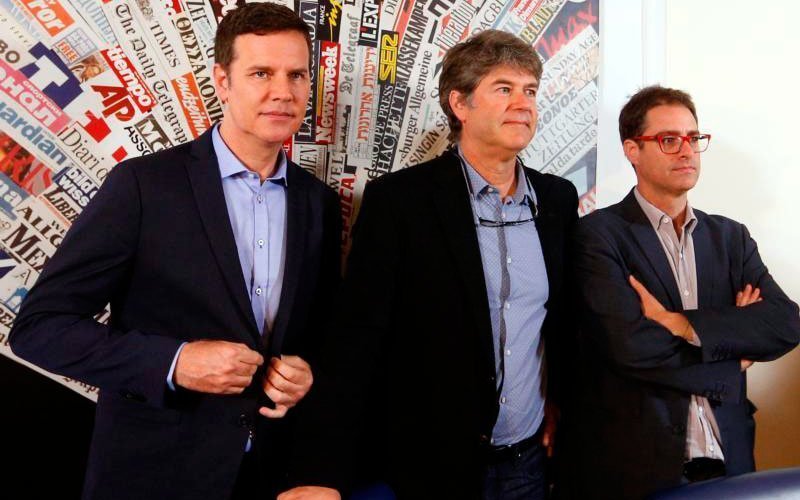 The pope will meet June 1-3 with “five priests who were victims of abuses of power, of conscience and sexual abuse,” the Vatican said in a statement May 22.

Two priests who have accompanied the survivors “in their juridical and spiritual journey” and “two laypeople involved in this suffering” also were invited by Pope Francis, the statement said. They will all be guests at the Domus Sanctae Marthae, the Vatican residence where Pope Francis lives.

The pope will celebrate a private Mass with the group June 2 and will meet with members of the group together and individually, the statement said. In late April, Pope Francis had hosted three laymen who were sexually abused by Father Karadima.

“With this new meeting, planned a month ago, Pope Francis wants to show his closeness to abused priests, accompany them in their pain and listen to their valuable opinion to improve the current preventative measures and the fight against abuses in the church,” the statement said.

The Vatican said the priests were abused by Father Karadima and his followers in the parish of Sagrado Corazon de Providencia, also known as the community of “El Bosque” (“The Forest”).

Known as an influential and charismatic priest, Father Karadima founded a Catholic Action group in the wealthy Santiago parish and drew hundreds of young men to the priesthood. Four of Karadima’s proteges went on to become bishops, including Bishop Juan Barros of Osorno.

However, several former seminarians of “El Bosque” revealed in 2010 that the Chilean priest sexually abused them and other members of the parish community for years. One year later, Father Karadima was sentenced by the Vatican to a life of prayer and penance after he was found guilty of sexual abuse.

Chilean survivors have also alleged that Bishop Barros — then a priest — as well as other members of Father Karadima’s inner circle had witnessed their abuse by his mentor.

The pope, who initially defended his 2015 appointment of Bishop Barros as head of the Diocese of Osorno, apologized after receiving a 2,300-page report from Archbishop Charles Scicluna of Malta.

In a letter released April 11, Pope Francis said he had been mistaken in his assessment of the situation in Chile, and he begged the forgiveness of the survivors and others he offended. He invited three survivors — Juan Carlos Cruz, James Hamilton and Jose Andres Murillo — to Rome in late April and called all of the Chilean bishops to the Vatican for meetings May 15-17.

In a document leaked by Chilean news channel Tele 13 before the meeting with the bishops, Pope Francis said he was concerned by reports regarding “the attitude with which some of you bishops have reacted in the face of present and past events.”

The document’s footnotes included several details from the investigation made by Archbishop Scicluna, which confirmed that, in some instances, the bishops deemed accusations of abuse as “implausible.”

But Pope Francis said he was “perplexed and ashamed” after he received confirmation that undue pressure by church officials was placed on “those who carry out criminal proceedings” and that church officials had destroyed compromising documents.

Those actions, he said, “give evidence to an absolute lack of respect for the canonical procedure and, even more so, are reprehensible practices that must be avoided in the future.”

After the three-day meeting, most of the Chilean bishops offered their resignations to the pope.

Back in Chile, bishops — including Bishop Alejandro Goic of Rancagua, president of the Chilean bishops’ commission for abuse prevention — continue to face a backlash over their handling of cases of abuse.

Bishop Goic suspended 14 of the diocese’s 68 priests May 19 after an investigative report by Tele 13 alleged there was a sex-abuse ring made up of clergy and known as “La Cofradia” (“The Brotherhood”).

According to the report, “La Cofradia” had its own hierarchical structure and carried out, as well as covered up, the sexual abuse of minors by members of the group.

The report also alleged that although Bishop Goic was informed and presented with evidence of the group’s existence by Elsa Fernandez, a local youth minister, he refused to act.

Fernandez said she contacted the Chilean bishops’ conference in January to inform them of the abuses committed by “La Cofradia.” However, she said, she was informed in an email that the conference “does not formally receive complaints.”

In an interview published on the Tele 13 website May 22, Bishop Goic said he had thought people talking about “La Cofradia” were speaking “in jest” and said he “never received a formal complaint that seriously said this was happening.”

After the report’s broadcast, Bishop Goic acknowledged that he had met with Fernandez, and he apologized for his failure to act “with the appropriate agility in the investigation” of the priests allegedly involved in the sex abuse ring.

“I must admit that personally, as a Christian and a pastor, I find myself very affected by this difficult situation that hurts and embarrasses me,” the bishop said. “I pray that the truth, the whole truth, may come to light in these cases and in any other situations that threaten the Gospel of Christ’s love.”