Pope to U.S. seminarians: Faith is a call to service and mission - Catholic Courier 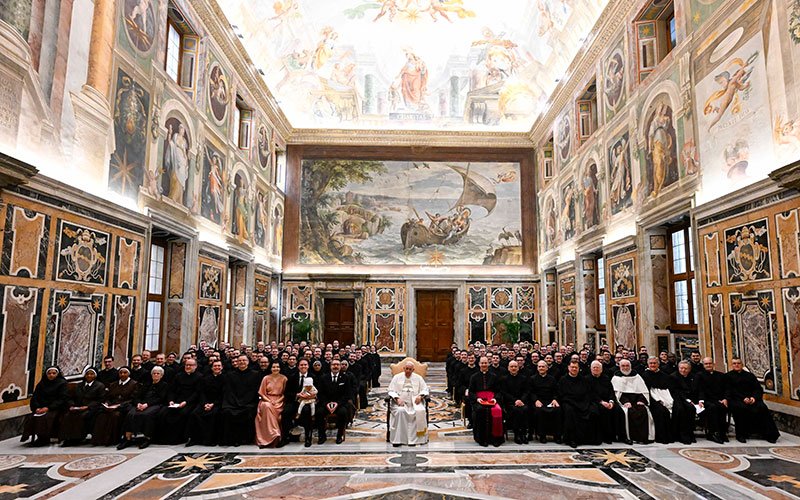 Pope Francis is pictured in a group photo during an audience with seminarians and staff of the Pontifical North American College at the Vatican Jan. 14, 2023. The pope said dialogue, communion and mission are essential to priestly formation. (CNS photo by Vatican Media)

VATICAN CITY (CNS) — The call to faith in Jesus always is a call to service and mission, Pope Francis told seminarians, priests and staff of the Pontifical North American College.

“Whenever Jesus calls men and women, he always does so in order to send them out, in particular to the vulnerable and those on the margins of society, whom we are not only called to serve but from whom we can also learn much,” the pope said Jan. 14.

The college, a seminary in Rome sponsored by the bishops of the United States, has 116 students from 55 dioceses.

Msgr. Thomas W. Powers, rector of the college, told Pope Francis: “The generous young men you see in front of you want to be like Jesus, the good shepherd. They know the Lord will use their eyes to seek out the suffering; their mouths to preach his Word, console the afflicted and make him present in the Eucharist; their hands to give strength to the sick and the dying and to heal those oppressed by sin; and their feet to go to the peripheries to lead the lost sheep home.”

Pope Francis noted that the students’ years in Rome coincide with “the synodal journey that the whole church is presently undertaking, a journey that involves listening — to the Holy Spirit and to one another — in order to discern how to help God’s holy people live his gift of communion and become missionary disciples.”

The same “challenge and task” is entrusted to those preparing for ordination, he said. “People nowadays need us to listen to their questions, anxieties and dreams so that we can better lead them to the Lord, who rekindles hope and renews the life of all.”

Pope Francis used the Gospel story of the call of Andrew and Simon Peter to illustrate what he said are three elements “essential to priestly formation: dialogue, communion and mission.”

When Jesus noticed Andrew and another following him, he asked what they were seeking and invited them to come and see where he was staying.

“Over the course of your lives, and especially throughout this time of seminary formation,” the pope told the seminarians, “the Lord enters into a personal dialogue with you, asking what you are looking for and inviting you to ‘come and see,’ to speak with him from your hearts and give yourselves to him confidently in faith and love.”

Daily prayer, Scripture meditation and praying “in silence before the tabernacle” are essential for building a personal relationship with the Lord, learning to hear his voice and discovering “how to serve him and his people generously and wholeheartedly,” the pope said.

“By staying with Jesus, the disciples began to learn — from his words, gestures and even his gaze — what really mattered to him and what his Father had sent him to proclaim,” he said. “In a similar way, the journey of priestly formation demands a constant communion: first with God, but also with those joined together in Christ’s body, the church.”

The pope asked the seminarians to “keep your eyes open both to the mystery of the church’s unity, manifested in legitimate diversity yet lived in the oneness of faith, and to the prophetic witness of charity that the church, particularly here in Rome, expresses through her concrete acts of care for those in need.”

Witnessing and participating in that service, he said, “will help you develop that fraternal love capable of seeing the grandeur of our neighbor, of finding God in every human being, of tolerating the nuisances of life in common.”

Pope Francis prayed that the students “will always be signs of a church that goes forth, sharing the presence, compassion and love of Jesus with our brothers and sisters.”