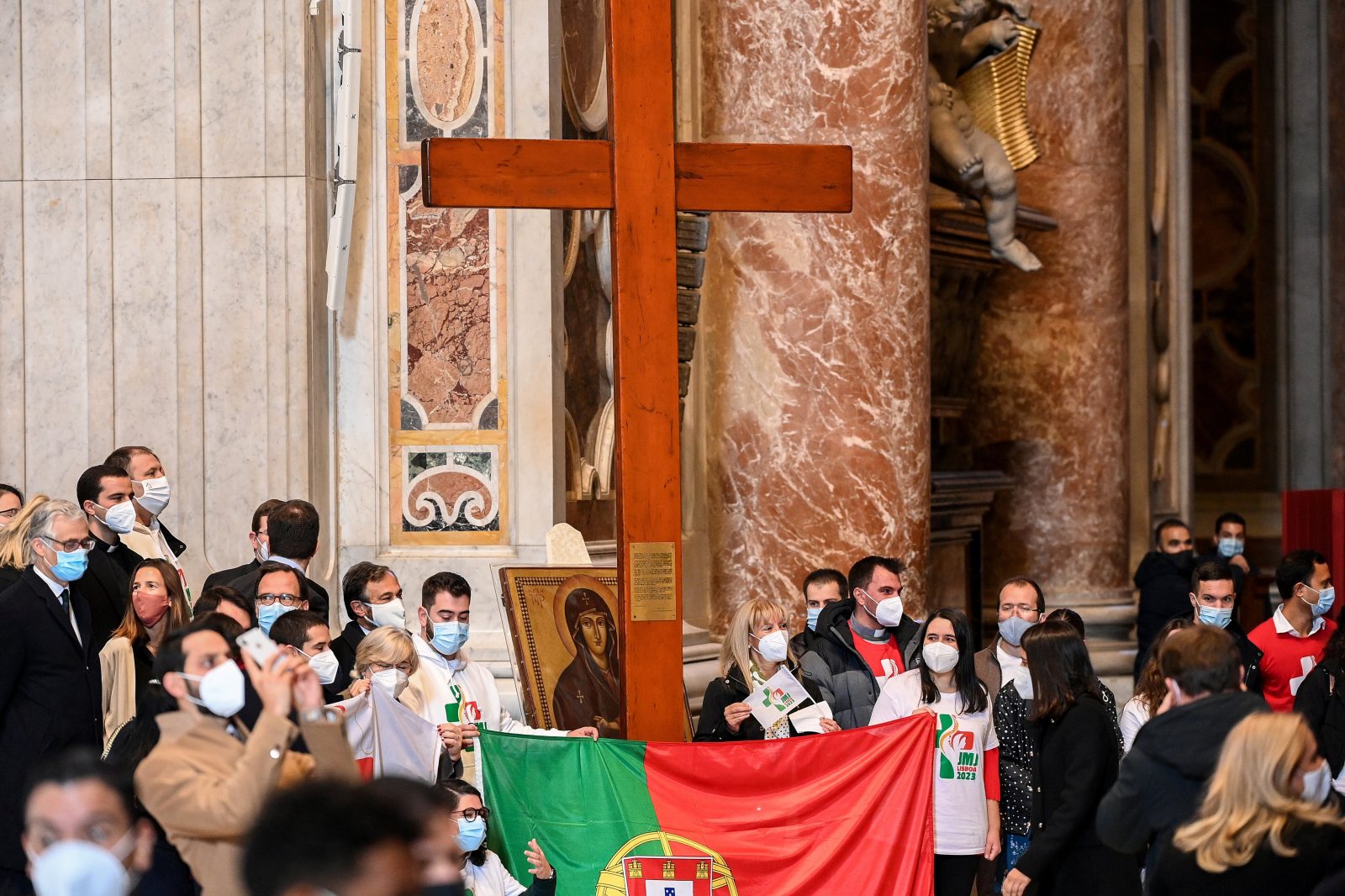 Young people from Portugal are pictured with the World Youth Day cross and their country's national flag following the cross' handover from their Panamanian peers at the end of Pope Francis' Mass Nov. 22, 2020. Pope Francis chose several verses that reflect on the call to "arise" and "stand up" as the themes for World Youth Day 2020-2022 in dioceses around the world, leading up to the international gathering in Lisbon, Portugal, in 2023. (CNS photo/Vincenzo Pinto, Reuters pool)

In his message for World Youth Day 2021, which will be celebrated at a diocesan level Nov. 21, the feast of Christ the King, the pope said the experiences wrought by the pandemic not only brought to light the problems plaguing the world, they also were an opportunity for many, especially young people, to help save lives and sow “the seeds of hope.”

“If our world is to arise, it needs your strength, your enthusiasm, your passion,” he said.

The message, released by the Vatican Sept. 27, centered on a verse from the Acts of the Apostles: “Stand up. I appoint you as a witness of what you have seen.”

Pope Francis chose several verses that reflect on the call to “arise” and “stand up” as the themes for World Youth Day 2020-2022 in dioceses around the world, leading up to the international gathering in Lisbon, Portugal, in 2023.

The question asked by St. Paul — who was known as Saul at the time — to Jesus on the road to Damascus, “Who are you, Lord,” is not just a question, but a prayer that young men and women today must ask Christ, the pope said.

“Prayer means talking directly with Jesus, even though our heart may still be confused and our mind full of doubts or even contempt for Christ and Christians,” the pope said. “I pray that every young person, in the depths of his or her heart, will eventually ask the question: ‘Who are you, Lord?'”

Christ’s response to Saul, “I am Jesus, whom you are persecuting,” was a profound response that revealed to the future apostle that he had already encountered Jesus in the Christians he persecuted, the pope said.

This revelation, he continued, is also a word for Christians today who proclaim, “‘Jesus, yes, the church, no!’ as if one could be an alternative to the other.”

When blinded after his encounter with Christ, Saul’s “certainties and pride dissipate,” which serves as a reminder for Christians today to be humble and to be aware of one’s own limitations, he said. “Those who are convinced that they know everything about themselves, other persons and even religious truths, will find it hard to encounter Christ.”

He also warned that pride can also lead young people to lose themselves “in fighting meaningless and even violent battles” that may have begun as fights to uphold just causes, but “once carried to extremes, turn into destructive ideologies.”

“How many young people today inspired, perhaps driven, by political or religious convictions, end up becoming instruments of violence and destruction in the lives of many others!” the pope wrote. “Some, moving with ease in the digital world, use virtual reality and social networks as a new battlefield, unscrupulously employing the weapon of fake news to spread venom and to wipe out their adversaries.”

Pope Francis encouraged young people to learn from St. Paul, a once scrupulous follower of the law who, despite his past persecution of Christians, was entrusted by God with spreading his word.

“Today Christ speaks to you the same words that he spoke to Paul,” the pope said. “Arise! Do not remain downcast or caught up in yourself: a mission awaits you! You, too, can testify to what Jesus has begun to accomplish in your lives.”