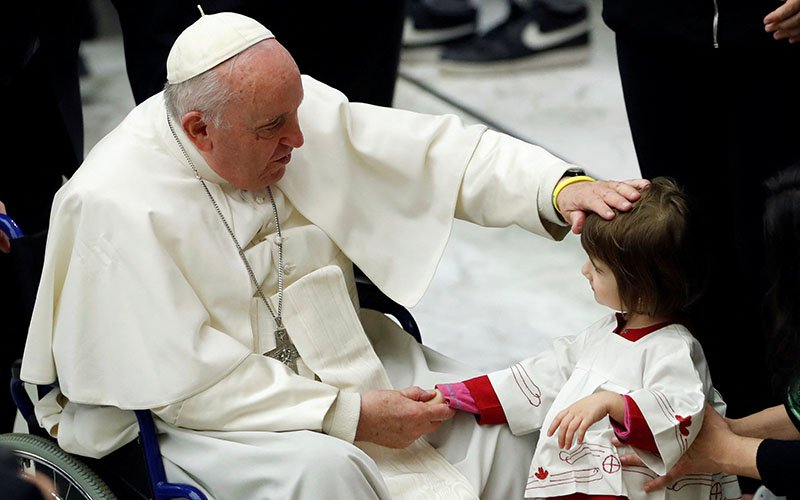 Pope Francis greets a child during his weekly general audience at the Vatican Dec. 7, 2022. (CNS photo by Remo Casilli/Reuters)

VATICAN CITY (CNS) — True love of God or love of another person should lead to a sense of freedom, not to a need to possess or control, Pope Francis said.

“Possessiveness is the enemy of goodness and kills affection — pay attention to this,” the pope told people at his weekly general audience Dec. 7.

Cases of domestic violence, which occur too often, he said, “almost always arise from the claim to possess the affection of the other, from the search for absolute security that kills freedom and stifles life, making it hell.”

Continuing his series of audience talks about spiritual discernment, Pope Francis said that what one feels and notices after making a decision also is part of the process.

And a “good sign” that a decision was right, he said, “is the fact of remaining free with regard to what has been decided, being willing to question it, even to give it up in the face of possible contradictions” and asking what the Lord was trying to teach through the experience.

God does not want to deprive people of something they want or hold dear, the pope said, but he does want people to live “with freedom, without attachment. Only God knows what is truly good for us.”

“We can only love in freedom, which is why the Lord created us free, free even to say no to him,” Pope Francis said. “Offering him what we hold most dear is in our best interest, enabling us to live it in the best possible way and in truth, as a gift he has given us, as a sign of his gratuitous goodness, knowing that our lives, as well as the whole of history, are in his benevolent hands.”

Explaining that when one makes good choices it benefits every area of one’s life with a greater sense of peace and harmony, the pope said the spiritual life is “circular.”

He used the example of deciding to pray an extra half hour a day. The goodness of that decision will be seen in how other parts of one’s day improve, bringing more serenity, less anxiety and “even relations with some difficult people become smoother.”