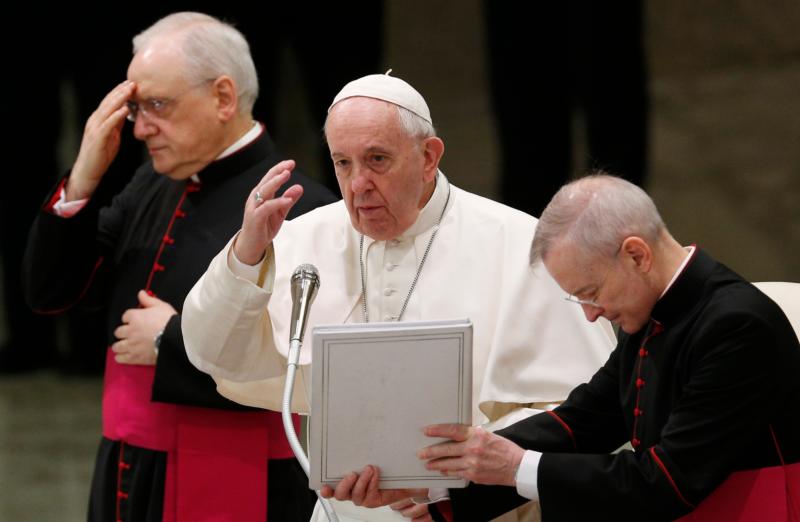 Pope Francis delivers his blessing as he leads his general audience in Paul VI hall at the Vatican Feb. 12, 2020. (CNS photo by Paul Haring)

VATICAN CITY (CNS) — Recognizing and repenting for one’s own sins and errors is difficult, but essential, Pope Francis said.

“To understand (one’s) sin is a gift from God, it is the work of the Holy Spirit” who helps each person realize “the evil I have done or that I may do,” the pope said Feb. 12 during his weekly general audience.

The pope continued a new series of talks on the Eight Beatitudes by reflecting on Jesus’ second “paradoxical” proclamation, “Blessed are they who mourn, for they will be comforted.”

This kind of mourning is more than mere grief, he said; it is “an inner sorrow that leads to a new relationship with the Lord and with each other.”

The Bible distinguishes between two types of sorrow, the pope said. One is the pain felt when facing the suffering or death of someone else and is a pain that comes from a place of love and empathy. The second is sorrow for one’s sin.

Just as there are sorrows to be comforted, he said, sometimes there are people who are too comforted, and they need some sorrow to “wake up” and remember how to cry for their brothers and sisters.

Mourning for another is a “bitter” but important journey that reveals “the sacred and irreplaceable value of every person” and is a reminder of how fleeting life is.

The sorrow people should experience over their sins is not the same thing as getting angry when they make a mistake. That, he said, is pride.

Instead people should truly mourn for what they have done, for their failure to do what was right or for betraying God by not living the way indicated by the Lord, “who loves us so much.”

“This is the sense of sin — it makes us sad knowing the good was not done,” he said. It is the sorrow of realizing “I have hurt the one I love,” leading to the precious “gift” of tears.

This lies at the heart of facing one’s own errors, which is “difficult, but vital,” he said.

“Look at the tears of St. Peter, which led him to a new and more authentic love,” versus Judas, who did not accept he did anything wrong, “and poor thing, he commits suicide.”

Mourning purifies and renews the heart and one’s relationship with God, the pope said, highlighting St. Ephraim the Syrian, who spoke of the beauty of a face washed with tears of repentance.

The pope asked people to pray for the grace to grieve for their sins and to be open to the healing grace of the Holy Spirit.

“Do not forget. God always forgives, even the worst sins. The problem is us who tire of asking forgiveness,” he said.

At the end of the audience, the pope led a moment of silence after he asked people to pray for Syria, which has been “shedding blood for years.”

“So many families, so many elderly people, children have to flee from war,” he said.

He also asked for prayers for people in China who are suffering from illnesses caused by the “vicious” coronavirus. “May they find the path to healing as soon as possible.”