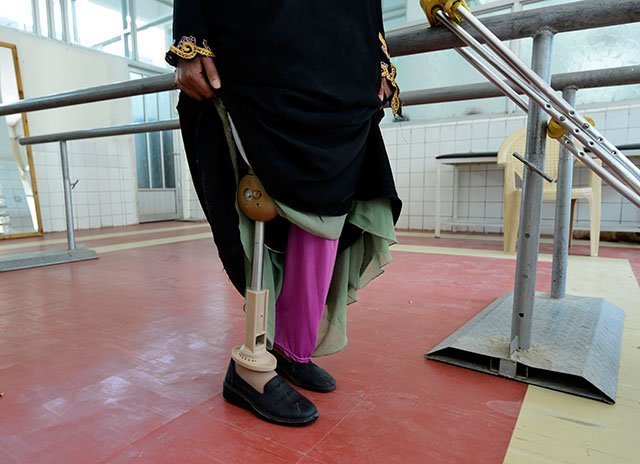 A woman tries out a prosthetic limb at a rehabilitation center in Sana'a, Yemen, in April. According to government statistics, Yemen has cleared 524,000 landmines and explosive shells over the last 10 years. Pope Francis is urging international action to rid the world of landmines, which, he said, prolong war and nurture fear.

"Reduce the stockpile of weapons! Ban weapons that have no reason for existing in human society and instead invest in education, healthcare, saving our planet and building societies marked by more solidarity and brotherhood," the pope said in a written message to representatives at the treaty review conference in late June.

Cardinal Pietro Parolin, Vatican secretary of state, sent the message in the pope’s name to the conference in Maputo, Mozambique, a nation that in the early 1990s became a symbol of the tragedy of landmines and their effects, particularly on children killed or maimed when they went into a mined field.

The victims of landmines, the message said, "carry — on their bodies and in their lives — signs of an inhumane weapon, an irresponsible weapon, a weapon of cowards."

For civilians in former war zones, "the environment around them is a constant threat when it should be a source of fruitfulness, development and the joy of living."

Cardinal Parolin said Pope Francis offered his encouragement to all those working for a total, global ban on landmines and he urged the international community to put the treaty into effect immediately.

Pope Francis, he said, urges all countries to commit themselves to the destruction of all existing mines and a complete ban on their production "so that there are no more victims of mines" and so that "no child must live in fear of mines."