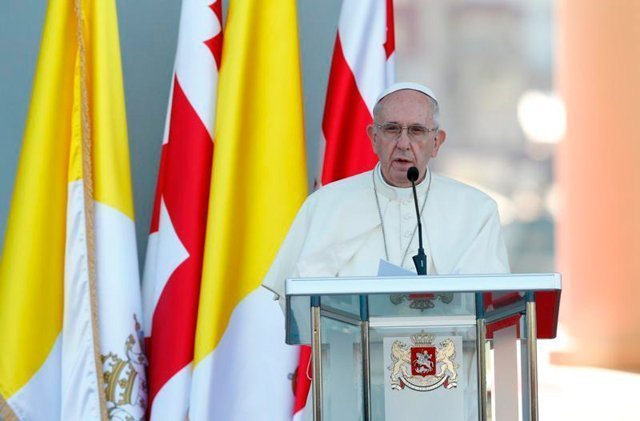 Pope Francis attends a meeting with Georgian President Giorgi Margvelashvili, government authorities, members of civil society and the diplomatic corps in the courtyard of the presidential palace in Tbilisi, Georgia, Sept. 30.
By Cindy Wooden
Catholic News Service
TBILISI, Georgia (CNS) — Subtly acknowledging Georgia’s ongoing territorial dispute with Russia, Pope Francis urged greater efforts to sow peace throughout the Caucasus region.
Shortly after arriving in Tbilisi at the start of his 16th foreign trip, the pope met privately with Georgian President Giorgi Margvelashvili Sept. 30 and, with the president, he addressed a small gathering of civic leaders and members of the diplomatic corps outside the presidential palace.
In a nation where more than 230,000 people are still displaced by the ongoing Georgian-Russian dispute over control of South Ossetia, the pope said it was time to find a way for the displaced to return to their homes and for respect for the "sovereign rights" of each nation. Only Russia and a handful of other nations recognize the supposed independence of South Ossetia.
The theme the government and local church chose for the pope’s visit Sept. 30-Oct. 1 was "pax vobis," "peace be with you."
Margvelashvili was more blunt than the pope. Georgia, he said, "is still victim of a military aggression on the part of another state: 20 percent of our territory is occupied and 15 percent of the population is displaced. Their homes were taken only because they are ethnically Georgian!"
"Only 40 kilometers (about 25 miles) from here, there is barbed wire that prevents a peaceful population — neighbors and relatives — from having a relationship with each other," the president said. "Only 40 kilometers from here, each day human beings witness violence, kidnappings, murders and offenses that deeply wound dignity."
The return of displaced people is the government’s primary concern, he said. "Human beings should not have to suffer because of political situations and they have a right to return to their own homes."
Pope Francis urged the people of the region to make concerted efforts to respect their cultural and ethnic differences, giving everyone a chance "to coexist peacefully in their homeland or freely to return to that land if, for some reason, they have been forced to leave it."
"The peaceful coexistence among all peoples and states in the region is the indispensable and prior condition for such authentic and enduring progress," the pope told the country’s leaders.
Georgia, which had been part of the Soviet Union, has been working for 25 years to build democracy and promote development. Pope Francis said he hoped the process would continue, increasingly involving all sectors of society to ensure "stability, justice and respect for the rule of law."
Both the pope and the president emphasized Georgia’s "European" identity, but also it’s geographical location and historic role as a meeting place of Asia and Europe. Over Russian objections, Georgia has been trying to join the members of the North Atlantic Treaty Organization; it has belonged to the Council of Europe since 1999.
The formal meetings took place after a brief airport welcoming ceremony. The president and patriarch were at the airport to welcome the pope, as were a boy and girl, who offered him a basket of grapes.
Pope Francis and Orthodox Patriarch Ilia II, bowed by age and Parkinson’s disease, stood next to each other as the Vatican and Georgian national anthems were played.
Leaving the airport, the papal motorcade passed two groups of Orthodox faithful protesting the pope’s visit. The groups held signs written in English. One said, "Pope arch heretic. You are not welcome in Orthodox Georgia." The other said, "Vatican is a spiritual aggressor."
– – –
Follow Wooden on Twitter: @Cindy_Wooden.
Copyright © 2023 Catholic News Service, Inc. All rights reserved. Linking is encouraged, but republishing or redistributing, including by framing or similar means, without the publisher's prior written permission is prohibited.