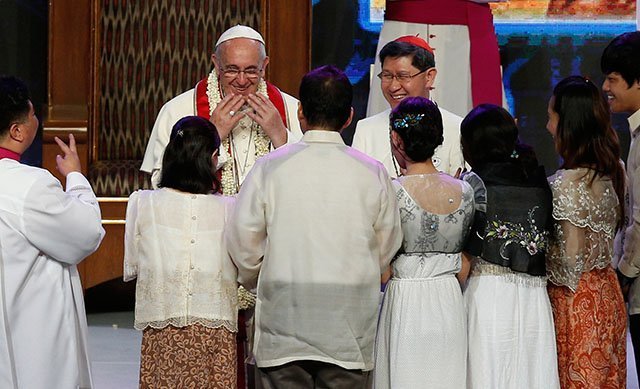 Pope Francis uses sign language to say thank you while meeting a deaf father and his family during an encounter with families in the Mall of Asia Arena in Manila, Philippines, Jan. 16. Also pictured is Cardinal Luis Antonio Tagle of Manila.

PASAY CITY, Philippines (CNS) — Pope Francis urged Catholic families to dream of how they might fulfill the will of God, while resisting "ideological colonization that tries to destroy the family" through such practices contraception and same-sex marriage.

The pope spoke Jan. 16 to a meeting of families at the Mall of Asia Arena, which was filled to its capacity of 20,000 people. The arena reverberated with people crying out "We love you Lolo Kiko" (Grandpa Kiko, the Filipino nickname for Francisco) as the pope walked the red carpet, stopping to touch the faithful and bless families who were among those representing the 86 dioceses of the country.

Commenting on a reading from the Gospel of St. Matthew, in which St. Joseph twice learns God’s will for the Holy Family from an angel in a dream, Pope Francis said dreaming could serve an analogous purpose in ordinary Christian families.

"I very much like this idea of dreaming in a family," the pope said. "Every mother and father dreams of their son or daughter in the womb for nine months. Isn’t that true? You dream of how your son or daughter might be. It isn’t possible to have a family without such dreams. When you lose this capacity to dream, you lose the capacity and energy to love."

Pope Francis said such dreaming could provide solutions to family problems and reveal the good qualities of one’s husband or wife. Then he added, to much laughter from the audience: "Don’t ever lose the dream of when you were boyfriend and girlfriend. Very important, that."

But the pope noted that St. Joseph’s dreams also revealed the "dangers which threatened Jesus and Mary, forcing them to flee to Egypt and then to settle in Nazareth. So too, in our time, God calls upon us to recognize the dangers threatening our own families and to protect them from harm."

First among these dangers, Pope Francis said, was what he called an "ideological colonization that tries to destroy the family."

"It is not born of the dream that we have with God from prayer, or from the mission that God gives us; it comes from outside, and that’s why I say it is colonization," the pope said, adding that it referred to "materialism and lifestyles which are destructive of family life and the most basic demands of Christian morality."

Pope Francis went on to say that the "family is also threatened by growing efforts on the part of some to redefine the very institution of marriage, by relativism, by the culture of the ephemeral, by a lack of openness to life."

The pope praised Blessed Paul VI for his 1968 encyclical "Humanae Vitae," which affirmed Catholic moral teaching against contraception, though he noted that it also instructed confessors to show "compassion in particular cases" of penitents who had failed to follow the teaching.

Blessed Paul "saw the threat of the destruction of the family by depriving it of children. Paul VI was courageous, he was a good pastor, and he warned his sheep about the wolves that were approaching."

In 2012, the Philippine government passed a "Responsible Parenthood and Reproductive Health Act," providing for government funding of contraception.

Discussing the term "ideological colonization" with reporters after the event, Cardinal Luis Antonio Tagle of Manila noted that African bishops had told him foreign aid to their countries was sometimes offered on the condition that they accept "alien" views of sexuality and marriage.

At the arena, the Argentine-born pope invoked the rhetoric of anti-imperialist revolution to encourage his Asian listeners: "Just as our peoples arrived at the maturity to say no in the period of colonization, we families have to be very wise and strong, with the fortitude to say no to these initiatives of colonization that could destroy the family."

Pope Francis called on Catholic families to be "sanctuaries of respect for life, proclaiming the sacredness of every human life, from conception to natural death."

The pope also urged the audience to care for the needy, particularly orphans and the elderly, offering as inspiration a home for rescued street children he had visited earlier the same day.

During his talk, the pope repeatedly departed from his prepared English text to improvise in his native Spanish, communicating with the audience with the aid of an interpreter. The references to dreaming and ideological colonization occurred when he was speaking off the cuff.

"It is really a timely reminder from the Holy Father," said Arnel Santos of Cainta, Philippines. "That to be able to recapture our capacity to dream for our families again we should be resting in the Lord. That means to pray always."

Santos and his wife have busy schedules as attorneys also raising two children. He told CNS they "pursue (their) profession a lot," and it became easy over 18 years of marriage to "lose sight of the essentials."

Parents pursuing careers and also trying to get better-paying work overseas has been a major concern of the church in the Philippines, and the pope heard from one woman whose family has been virtually split since the third year of her marriage.

Ediza Pumarada has been married to her husband, who works in Singapore, for 22 years.

"The psychological and emotional burdens were difficult to bear in spite of the earnings that working abroad brought our family," she said in a speech.

"Homesickness and loneliness set in. My adjustments as a wife, left alone to take care of our daughter, assuming both the roles of being father and the mother for her, was a real challenge for me. Keeping our loving relationship and our trust for each other, in spite of our separation, was even more challenging."

The pope also heard from a deaf husband, whose wife is also deaf. The man spoke of the difficulties of living in virtual isolation, if not for the help they received from their hearing children, who often sign for them.

Contributing to this story was Simone Orendain.