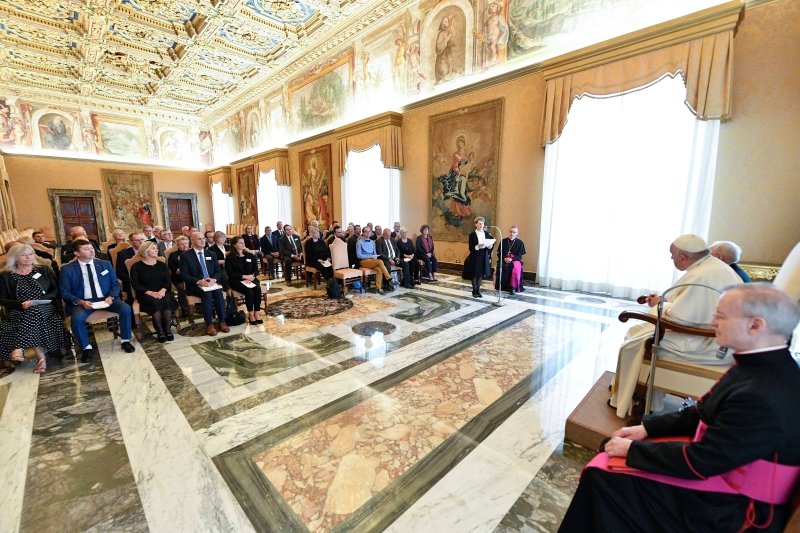 Pope Francis listens to one of the elected officials from France participating in a pilgrimage to Rome sponsored by the Archdiocese of Cambrai Oct. 21, 2022, in the Consistory Hall of the Apostolic Palace. The pope urged the officials to reject the idea of legalizing euthanasia, a debate currently underway in the country. (CNS photo/Vatican Media)

VATICAN CITY (CNS) — As France begins a national debate on euthanasia, Pope Francis urged politicians from the country’s northern region to reject the “throwaway culture” and instead focus on providing care and relief to those nearing the end of their lives.

“I dare to hope that on such essential issues the debate can be conducted in truth to accompany life to its natural end and not to get caught up in this throwaway culture that is everywhere,” the pope said Oct. 21 as he met with mayors and other elected local, regional and national officials making a pilgrimage sponsored by the Archdiocese of Cambrai.

French President Emmanuel Macron, who is scheduled to meet with Pope Francis Oct. 24, announced in early September the beginning of a nationwide discussion about allowing euthanasia in some cases; he called for local debates, country-wide consultations with health care workers and discussions with political parties to reach a decision in 2023.

Pope Francis began his talk to the pilgrims by noting how much the region and people of Cambrai had suffered with shuttering of coal mines, steel mills and textile factories, and he urged the officials to pay particular attention to the region’s poor and needy.

“Welcome and care” must be the guiding principles of their public policies, the pope told them.

With northern France hosting thousands of immigrants, Pope Francis urged them to be welcoming of “the most disadvantaged people, primarily migrants — and you know how crucial this issue is and how close to my heart.”

But he said he also was thinking of people with disabilities. “They need more structures to facilitate their lives and the lives of their loved ones and, above all, to demonstrate the respect that is due to them.”

Policies to promote their inclusion also must strive to help them find jobs, he said. “It is more necessary than ever to continue to set as a priority goal access to work — for everyone!”

But the heart of the pope’s remarks were about the care of the sick and elderly, especially at the very end of their lives.

The elderly in nursing homes and those who are dying, he said, must be accompanied and given palliative care.

“Caregivers, by their nature, have a vocation to provide care and relief,” the pope said. While it is not always possible to heal a patient, “we cannot ask caregivers to kill their patients, which is kind of the program of the throwaway culture.”

Pope Francis repeated what he had told a French journalist on the flight back from his trip to Kazakhstan in mid-September: The more people find a justification to kill someone, the more they kill.

“This is a mathematical progression,” he said.

Tags: Life Issues, Pope Francis
Copyright © 2022 Catholic News Service, Inc. All rights reserved. Linking is encouraged, but republishing or redistributing, including by framing or similar means, without the publisher's prior written permission is prohibited.