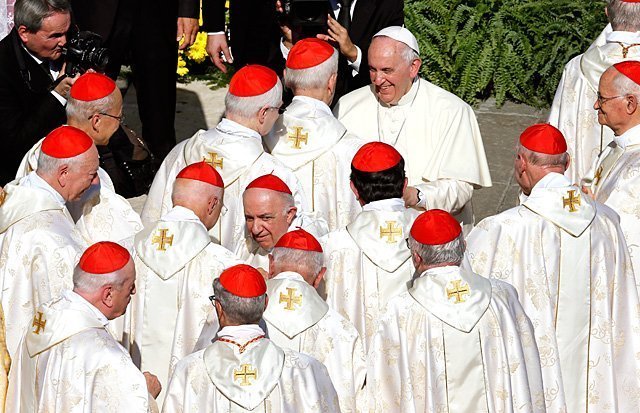 Pope Francis greets cardinals at the conclusion of the beatification Mass of Blessed Paul VI in St. Peter's Square at the Vatican Oct. 19, 2014.

VATICAN CITY (CNS) — Writing to the 20 new cardinals he will create in February, Pope Francis said they should graciously accept that their friends, family and faithful will want to celebrate, but they also should ensure that the celebrations are not exaggerated.

"As good Christians, they will celebrate because Christians rejoice and know how to celebrate," the pope wrote. "Accept it with humility. Only do so in a way that in these celebrations there does not creep in a spirit of worldliness that intoxicates more than grappa on an empty stomach, disorienting and separating one from the cross of Christ."

The letter, signed by the pope Jan. 4, the day he announced the names of the new cardinals, was published Jan. 23 in L’Osservatore Romano, the Vatican newspaper. Pope Francis had written a similar letter, also requesting restrained celebrations, when he created new cardinals in 2014.

Pope Francis also told the 20 cardinals he will create Feb. 14 that their new role in the church is a call to greater service — helping, supporting and being particularly close to the pope for the good of the church.

"It will do your heart good to repeat in prayer the expression Jesus himself suggested to his disciples to help them remain humble: ‘We are worthless slaves,’" the pope said, quoting Luke 17:10.

"Maintaining humility in service is not easy when people consider becoming a cardinal a prize, the culmination of a career" or a sign of power, he said. Cardinals must make a commitment to ensuring they do not fall prey to such ideas, but rather remember that they are called to give greater witness to Christ, "to the point of shedding blood if necessary."

Pope Francis closed his letter saying he would see them Feb. 14.

"Prepare with prayer and some penitence," he said. "Be at peace and be happy. And, please, I ask you not to forget to pray for me."