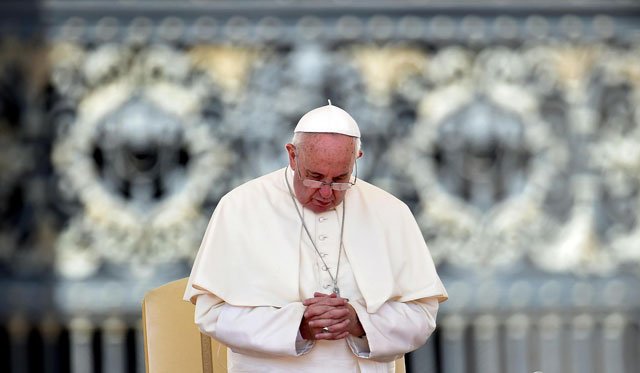 Pope Francis prays as he leads his weekly audience in St. Peter's Square at the Vatican Aug. 26.
By Catholic News Service
VATICAN CITY (CNS) — The World Day of Prayer for the Care of Creation should be a time for individuals to examine their lifestyles and the way they impact the environment, Pope Francis said.
At the end of his weekly general audience Aug. 26, the pope asked Catholics and "all people of goodwill" to join members of the Orthodox Church in the special day of prayer Sept. 1.
"We want to make our contribution to overcoming the ecological crisis that humanity is experiencing," the pope said, explaining why he decided the Catholic Church should mark the annual day of prayer begun by the Orthodox Church in 1989.
Around the world, the pope said, church groups are planning prayer and reflection initiatives in order to make the day of prayer a key moment for "assuming coherent lifestyles" that have less negative impact on nature.
Pope Francis invited everyone to join him and Vatican officials for an evening prayer service Sept. 1 in St. Peter’s Basilica.
Copyright © 2023 Catholic News Service, Inc. All rights reserved. Linking is encouraged, but republishing or redistributing, including by framing or similar means, without the publisher's prior written permission is prohibited.