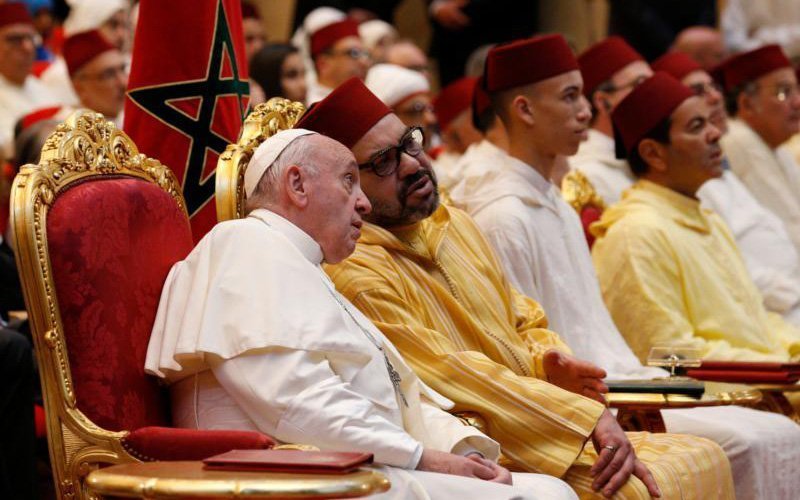 Pope Francis and King Mohammed VI of Morocco visit the Mohammed VI Institute for the training of imams and preachers in Rabat, Morocco, March 30, 2019. (CNS photo by Paul Haring)

RABAT, Morocco (CNS) — Moving from ideals and principles to concrete examples, Pope Francis met in Morocco with Muslim men and women studying to be prayer leaders and preachers and with dozens of migrants assisted by Caritas.

A religious faith respectful of others and care for migrants were key themes in Pope Francis’ speech at his arrival ceremony in Rabat March 30. After meeting privately, Pope Francis and King Mohammed VI went on to the school the king founded to counter violent strains of Islam by training imams and “murshid,” men and women preachers and spiritual guides.

And the pope ended his day at the Rabat Caritas center for migrants, a facility providing special care to women, unaccompanied minors and others among the most vulnerable of the estimated 80,000 migrants currently in Morocco.

Neither the pope nor the king gave a speech at the Mohammed VI Institute for the Training of Imams, Morchidines and Morchidates. Instead they listened.

Aboubakr Hmaidouch, a 25-year-old student born in France, said the terrorist attacks there inspired him to study Islam more seriously. At the institute, he said, “the training is inspired by a doctrine that takes into account practical life and culture, and that accepts diversity; a dogma based on moderation and reaching a middle ground, but also on a spirituality that unites you to God and his creatures through the bond of love.”

Hindu Usman, a woman from Nigeria, told the pope and king that terrorism and anti-Christian violence in her country is fueled by a faith “founded on passion, rather than knowledge,” but that thanks to her education in Rabat, “I will be able to argue and convince (people) that religion is for peace and goodness, that a believer is only accountable before God (and) that women are equal with men in their rights.”

At the Caritas center, the pope continued the reflection he began earlier in the day as the king formally welcomed him to Rabat.

The pope had described Morocco as a “bridge between Africa and Europe,” and most of the 80 migrants the pope met at the Caritas center had set off from their homes hoping to cross that bridge and make a new life in Europe.

Pope Francis had called for “a change of attitude toward migrants, one that sees them as persons, not numbers, and acknowledges their rights and dignity in daily life and in political decisions.”

“The issue of migration will never be resolved by raising barriers, fomenting fear of others or denying assistance to those who legitimately aspire to a better life for themselves and their families,” the pope had said.

Meeting the migrants, he insisted that “no one can be indifferent to this painful situation” of so many millions of migrants around the world. It is “a wound that cries out to heaven,” he said.

Abena Banyomo Jackson, a migrant from Cameroon, told the pope he left his home in 2013 hoping to get to Europe to find work and help his family. “After crossing Nigeria, Niger and Algeria, I arrived illegally in Morocco.”

He tried to reach Spain, but was unsuccessful, so he spent time in the informal migrant settlements in the forests and in the cities, until he met a priest. “He welcomed me into his home, the church, and gave me a new breath,” and a job, helping other migrants. Finally, in 2016, he received a Moroccan residency permit thanks to a program by the king to regularize the migrants present in the country.

The way a country treats migrants and refugees says something about what its people think is “the value of each human life,” the pope said.

“It depends above all on our openness to being touched and moved by those who knock at our door. Their faces shatter and debunk all those false idols that can take over and enslave our lives; idols that promise an illusory and momentary happiness blind to the lives and sufferings of others,” he said. “How arid and inhospitable a city becomes, once it loses the capacity for compassion,” it becomes “a heartless society — a barren mother.”

Pope Francis repeated his frequent appeal to the global community to do more to assist poor countries so people do not feel forced to migrate and to expand the pathways that would allow migrants and refugees to move to a new country legally and safely.

Until that happens, he said, “the emergency of irregular migration has to be met with justice, solidarity and mercy,” adding that “forms of collective expulsion, which do not allow for the suitable treatment of individual cases, are unacceptable.”

Governments, churches and other institutions also must do more to help newcomers and longtime residents get to know each other and learn about each other’s cultures. When people know nothing of the other, he said, it is natural to “raise barriers to defend ourselves,” but people of good will should fight the temptation to be “conditioned by fear and ignorance.”