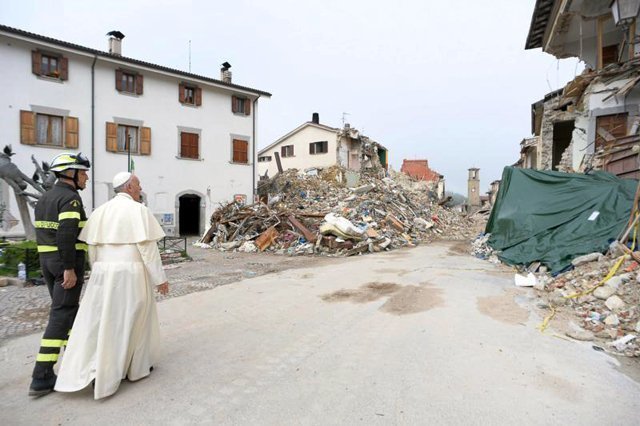 Pope Francis walks with a firefighter as he visits the earthquake-ravaged town of Amatrice, Italy, Oct. 4. The town was devastated by an Aug. 24 earthquake that claimed the lives of nearly 300.
By Junno Arocho Esteves
Catholic News Service
VATICAN CITY (CNS) — Amid the devastation wrought by an earthquake in central Italy, Pope Francis quietly prayed and offered words of consolation to survivors and those assisting in relief efforts.
Later, when crowds pressed around him, the pope used a megaphone to tell the people of Amatrice that he had wanted to visit sooner, but felt showing up immediately after the Aug. 24 quake would have complicated relief efforts and "would have been more of a hindrance than a help."
"From the first moment, I felt that I needed to come to you! Simply to express my closeness to you, nothing more. And I pray; I pray for you!" the pope said Oct. 4.
The epicenter of the earthquake was close to Norcia, the birthplace of St. Benedict, and had a magnitude of 6.2, according to the U.S. Geological Survey.
Amatrice was the hardest-hit town, accounting for 234 of the estimated 290 deaths, according to the Italian Civil Protection office.
Shortly after news of the quake, the pope had led 11,000 pilgrims in St. Peter’s Square in praying the rosary for the victims. He also sent six Vatican firefighters and six Vatican police officers to Amatrice to help search for victims trapped under the rubble.
During his flight to Rome from Azerbaijan Oct. 2, the pope told journalists that while he was unsure when he would visit the towns devastated by the earthquake, he wanted to do it alone.
"I will do it privately, alone, as a priest, bishop and pope. But alone. That’s how I want to do it and I want to be close to the people," he said.
Two days later, the pope, accompanied by Bishop Domenico Pompili of Rieti, visited the newly built Capranica Elementary School in Amatrice and greeted the students individually before making his way to the "red zone," an area completely destroyed by the earthquake and cordoned off due to safety concerns.
Looking over the rubble where the town center once stood, the pope prayed in silence for the victims of the quake.
Pope Francis also visited the St. Raphael Borbona Assisted Living Facility in Rieti, where he greeted each of the home’s 60 elderly patients and ate lunch with them. Many of the residents were displaced from Amatrice when their homes were destroyed.
Before departing Amatrice for the neighboring towns of Accumoli and Arquata del Tronto, the pope told the crowd gathered around him that he had two simple gifts for them.
"Closeness and prayer: this is my offer to you," he said. "May the Lord bless you all and Our Lady protect you in this moment of sadness, pain and trial."
After giving them his blessing, Pope Francis led the people in praying a Hail Mary for those who died.
"Always look ahead," he told the survivors. "Have courage and help each other. One walks better together, alone we go nowhere. Go forward!"
Father Savino d’Amelio, pastor of St. Augustine Parish in Amatrice, told Vatican Radio that the pope’s visit was "very beautiful and very meaningful."
"It was an unexpected gesture, sudden, a bit like the earthquake that came when no one was expecting it," he said.
With aftershocks continuing, including the night before the pope’s visit, people are sleeping with one eye open, "ready to run," the priest said.
Pope Francis continued visiting towns in the afternoon, briefly visiting firefighters in Cittareale before arriving in Accumoli. After greeting the town’s mayor and survivors, the pope spent several minutes in silent prayer in front of the Church of St. Francis, which was destroyed by the earthquake.
He then traveled to the nearby towns of Pescara del Tronto and Arquata del Tronto, where he was greeted by more than 100 people and visited a makeshift school among the tents for the displaced.
Echoing his words in Amatrice, the pope encouraged the people to not lose hope and joined them in prayer for their loved ones who died in the quake.
"I wanted to be close to you right now and say to you that you are in my heart and I know, I know your suffering and your anguish. I also know about your deceased loved ones and I am with you," he said.
Pope Francis ended the day with a visit to the town of San Pellegrino di Norcia, where he prayed in front of the town’s badly damaged church and greeted the townspeople before returning to Rome.
– – –
Follow Arocho on Twitter: @arochoju.
Copyright © 2023 Catholic News Service, Inc. All rights reserved. Linking is encouraged, but republishing or redistributing, including by framing or similar means, without the publisher's prior written permission is prohibited.