Pope: War is 'at our doorstep' - Catholic Courier 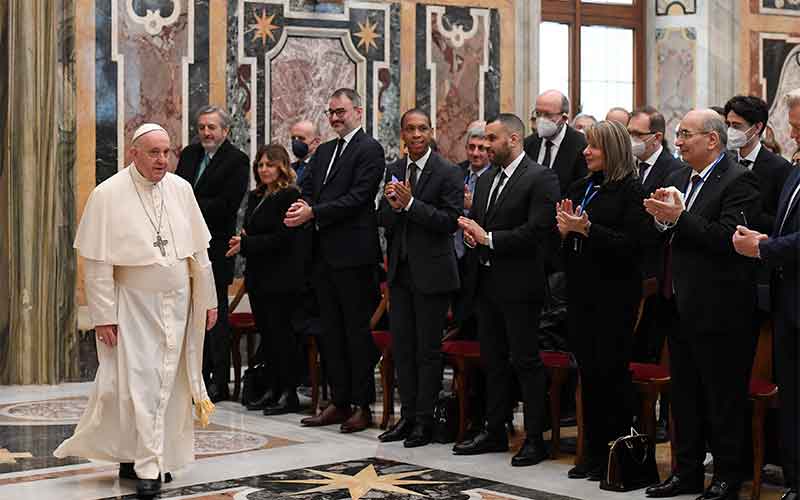 Pope Francis arrives for an audience with participants attending an international conference on democracy, at the Vatican March 18, 2022. The conference was sponsored by the "Gravissimum Educationis" Pontifical Foundation. (CNS photo by Vatican Media)

Pope prays for an end to war in Ukraine

VATICAN CITY (CNS) — While people can be indifferent to wars in distant lands, they cannot afford to look the other way when war is at their doorstep, Pope Francis said.

“We are used to hearing news of wars, but far away — Syria and Yemen, usually,” the pope told participants at an international conference on education and democracy sponsored by the Pontifical Foundation “Gravissimum Educationis.”

“Now, war has come closer, it’s practically on our doorstep. And this makes us think about the ‘savagery’ of human nature, about how far we can go. Murderers of our brothers,” he said March 18.

During the meeting at the Vatican, Msgr. Guy-Réal Thivierge, secretary general of the pontifical foundation, read a letter addressed to the pope from Father Yuriy Pidlisnyi, head of the Ukrainian Catholic Church’s commission for family and laity.

In his letter, the priest thanked Pope Francis for his prayers for Ukraine and for his visit Feb. 25 to the Russian Embassy to the Holy See to express his concern for the war.

The Ukrainian priest said the thousands of dead and wounded men, women and children, as well as the plight of millions of refugees fleeing the country, are a reminder of Jesus’ words “on practical solidarity and the responsibility of every Christian and people of goodwill.”

Citing the Gospel of St. Matthew, in which Christ says that “whatever you did for one of the least of these brothers and sisters of mine, you did for me,” Father Pidlisnyi said those acts of charity and solidarity can be applied to those suffering the consistent Russian bombardment.

“These words of the Savior can be continued, ‘I was being bombed and you didn’t close the skies for me.'” he wrote. “Please Your Holiness, with your prayers and your authority, help to stop the war for these most vulnerable people.”

Pope Francis thanked Msgr. Thivierge for reading the letter which “draws attention to what is happening.”

To look the other way in the face of suffering, he added, is “the most pagan attitude of Christians.”

“A Christian, when he or she gets used to looking the other way, slowly becomes a pagan disguised as a Christian,” the pope said.

Pope Francis said the war in Ukraine should make Christians reflect on whether they are doing something to confront the reality of war and violence or are living “carefree as we normally live through distant wars.”

“A war is always — always! — a defeat for humanity, always. We, the learned, who work in education, are defeated by this war because on the other hand we are responsible. There are no just wars: they do not exist!” the pope said.