Pope will lead Angelus, not Mass, on world day for elderly - Catholic Courier 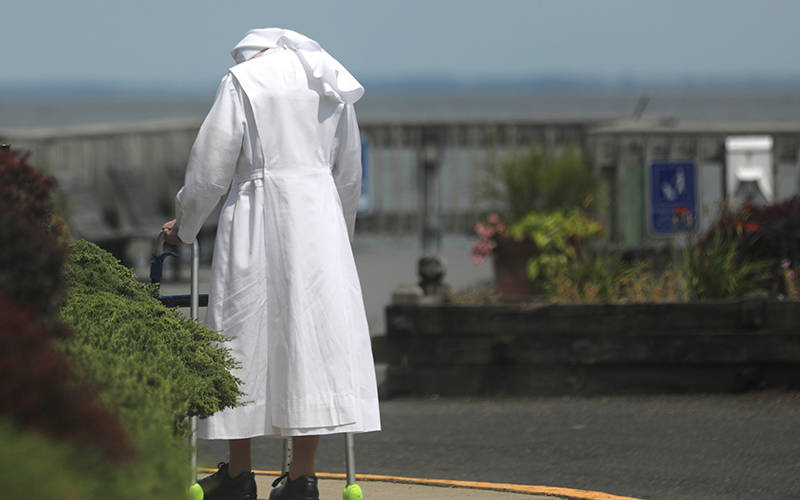 Sister Marcelle Larkin of the Little Sisters of the Poor in Washington, walks along a sidewalk during a visit to Maryland’s Chesapeake Bay area in North Beach July 22, 2021. The Vatican press office said Pope Francis, who had colon surgery July 4, will not preside over the July 25 liturgy at the Vatican marking World Day for Grandparents and the Elderly. (CNS photo by Bob Roller)

VATICAN CITY (CNS) — The Vatican press office said Pope Francis, who had colon surgery July 4, would not preside over a liturgy July 25 marking the first World Day for Grandparents and the Elderly.

The pope, however, is scheduled to give his normal Angelus address and prayer at noon the same day.

Matteo Bruni, director of the Vatican press office, told reporters July 23 that it was part of “normal convalescence,” saying the Mass, which had been scheduled months ago, would have meant wearing heavy vestments and alternating between walking, sitting and standing for about two hours. While the Mass was to be held inside St. Peter’s Basilica, outdoor temperatures have been and were expected to remain in the 90s.

The Mass was to be presided over by Archbishop Rino Fisichella, president of the Pontifical Council for Promoting New Evangelization.

Meanwhile, the Dicastery for Laity, the Family and Life, which was organizing events and resources for the world day, made a video available of grandparents and the elderly from all over the world reciting the official prayer for the event with the pope. Those people included Canadian Bishop Laurent Noël, who is the oldest bishop in the world at the age of 101. He is the retired Bishop of Trois-Rivières in Québec and was a council father at the last three sessions of the Second Vatican Council.

The video, prayer, Pope Francis’ message and other pastoral resources can be found at bit.ly/elderly2021 and www.laityfamilylife.va.