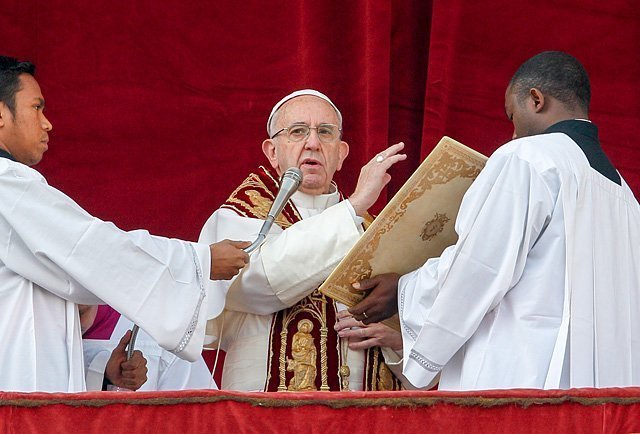 Pope Francis delivers his Christmas blessing "urbi et orbi" (to the city and the world) from the central balcony of St. Peter's Basilica at the Vatican Dec. 25.

VATICAN CITY (CNS) — The song of the angels that heralded the birth of Christ urges men and women to seek peace in a world divided by war, terrorism and greed, Pope Francis said.

"Today this message goes out to the ends of the earth to reach all peoples, especially those scarred by war and harsh conflicts that seem stronger than the yearning for peace," the pope said Dec. 25.

Migrants, refugees, children suffering due to hunger and war, victims of human trafficking as well as social and economic unrest were also remembered by the pope.

"Peace to the peoples who suffer because of the economic ambitions of the few, because of the sheer greed and the idolatry of money, which leads to slavery," he said.

An estimated 40,000 people slowly made their way through security checkpoints into St. Peter’s Square to attend the pope’s solemn Christmas blessing "urbi et orbi" (to the city and the world).

Heightened security following the Dec. 19 terrorist attack in Berlin, Germany was evident as police cordoned off streets and established multiple checkpoints throughout the area.

While police presence is standard for major events in St. Peter’s, the added security was a sign of the times where crowded areas have become a target for terrorists.

The pope prayed for "peace to those who have lost a person dear to them as a result of brutal acts of terrorism that has sown fear and death into the hearts of so many countries and cities."

Countries ravaged by the scourge of war were also in the pope’s thoughts, particularly in "the war-torn land of Syria, where far too much blood has been spilled," especially in the city Aleppo. The pope called on the world to support the people of Syria with humanitarian assistance and to put an end to the conflict.

"It is time for weapons to be silenced forever and the international community to actively seek a negotiated solution so that civil coexistence can be restored in the country," he said.

The pope appealed for peace for the people of Ukraine, "who to this day suffer the consequences of the conflict."

The Vatican announced Dec. 23 that the first installment of 6 million euro ($6.3 million) would be distributed on Christmas Day to assist in relief efforts in Ukraine. Earlier this year, the pope called for a collection across churches in Europe to help the people of the war-torn country.

Iraq, Libya and Yemen, "where their peoples suffer war and the brutality of terrorism," were in the pope’s prayers so that they may "be able to once again find unity and harmony."

The pope also remembered Africa, especially Nigeria where fundamentalist terrorism "exploits children in order to perpetrate horror and death" as well as South Sudan and the Democratic Republic of Congo, calling on their leaders to choose the path of dialogue rather than "the mindset of conflict."

He also prayed for peace in the Holy Land and that Israelis and Palestinians turn away from hate and revenge while having "the courage and determination to write a new page of history."

Praying for an end to current tensions, the pope also called for peace in Venezuela, Colombia, Myanmar and the Korean peninsula

Christ’s birth, he said, is a sign of joy and a call for the world to contemplate "the child Jesus who gives hope once again to every person on the face of the earth."

After his address, the bells of St. Peter’s rang loudly, pealing throughout the square as they did in the evening Dec. 24 following the proclamation of Jesus’ birth during Christmas Mass.

The darkness of the night sky over St. Peter’s Basilica was broken by the bright lights emanating from the colonnade and the Christmas tree from the square.

Temperatures just above 40 degrees didn’t stop thousands of people unable to enter the packed basilica from participating in the Mass, sitting outside and watching the Mass on giant screens in St. Peter’s Square.

In his homily, the pope said the love of God is made visible at Christ’s birth on a night of glory, joy and light "which would illuminates those who walk in darkness."

The shepherds are a witness to "the enduring sign" of finding Jesus when they discover him wrapped in swaddling clothes and lying in a manger;" a sign that is given to all Christians today, the pope said.

"If we want to celebrate Christmas authentically, we need to contemplate this sign: the fragile simplicity of a small newborn, the meekness of where he lies, the tender affection of the swaddling clothes. God is there," he said.

This sign of humility, he added, also reveals a paradox: God who chose not to reveal himself through power, but rather through the "poverty of a stable" and "in the simplicity of life."

"In order to discover him, we need to go there, where he is: we need to bow down, humble ourselves, make ourselves small," the pope said.

The image of the child in the manger, he continued, is a challenge for all Christians to "leave behind fleeting illusions" and "renounce insatiable claims."

It is also a calling for the world to respond to the sufferings of children in this age who "suffer the squalid mangers that devour dignity: hiding underground to escape bombardment, on the pavements of a large city, at the bottom of a boat overladen with immigrants," the pope said.

"Let us allow ourselves to be challenged by the children who are not allowed to be born, by those who cry because no one satiates their hunger, by those who do not have toys in their hands, but rather weapons," he said.

Christmas is not only a mystery of hope but also of sadness where "love is not received and life discarded" as seen by the indifference felt by Mary and Joseph "who found the doors closed and placed Jesus in a manger."

That same indifference, he said, exists today when commercialism overshadows the light of God and "when we are concerned for gifts but cold towards those who are marginalized."

"This worldliness has taken Christmas hostage. It needs to be freed!" the pope said departing from his prepared remarks.

However, the hope of Christmas is the light that outshines this darkness and "draws us to himself" through his humble birth in Bethlehem," he said.

Noting that Bethlehem means "house of bread," the pope said that Jesus was born to nourish us, creating a "direct thread joining the manger and the cross."

"In this way, he seems to tell us that he is born as bread for us; he enters life to give us his life; he comes into our world to give us his love. He does not come to devour or to command but to nourish and to serve," the pope said.

Pope Francis said that like the shepherds, who although marginalized are chosen to witness the birth of Christ, Christians are reminded of God’s closeness and can enjoy the true spirit of Christmas: "the beauty of being loved by God."

"Contemplating his humble and infinite love, let us say to him: thank you, thank you because you have done all this for me," the pope said.