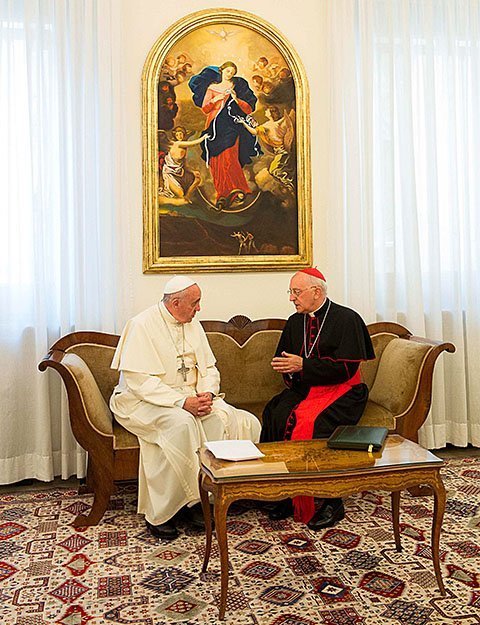 Pope Francis meets Cardinal Fernando Filoni at the Vatican Aug. 11. Cardinal Filoni, a specialist in Chinese and Middle East affairs, has been named the pope's personal envoy to Iraq.

"The news from Iraq leaves us incredulous and appalled," Pope Francis said. "Thousands of people, including many Christians, have been chased from their homes in a brutal way; children die of thirst and hunger during the flight; women are kidnapped; people are massacred; violence of every kind; destruction everywhere."

The pope also used Twitter to appeal for peace and for the protection of innocent civilians. Instead of one daily general message about faith on his @Pontifex account, Pope Francis sent three tweets each day Aug. 8-10 urging people to join him in prayer.

At the Angelus, he also called on the international community and Iraq’s beleaguered government to "stop these crimes" and reestablish law and order.

Pope Francis thanked "those who, with courage, are bringing aid to these brothers and sisters of ours" and told people he was sending Cardinal Fernando Filoni as his personal envoy to Iraq.

Cardinal Filoni, a former nuncio to Iraq and current prefect of the Congregation for the Evangelization of Peoples, met the pope privately the evening of Aug. 10 to receive instructions for the mission and a financial contribution "for the urgent needs" of the victims, according to Jesuit Father Federico Lombardi, the Vatican spokesman.

The cardinal told CTV, the Vatican television center, that he had the impression Pope Francis "would like to go himself to be with these poor people. He entrusted this mission to me precisely so that I would make his affection, his profound love," clear to the people.

The Vatican said Aug. 11 that the cardinal was expected to leave Rome Aug. 12 and visit Baghdad as well as Iraqi Kurdistan, where many of those displaced by the Islamic State are seeking shelter.

Along with perhaps hundreds of thousands of Christians and tens of thousands of members of the Yezidi religious minority, the cardinal said, there probably are "a million displaced people looking for a safe place" to live free from the threat of the forces of the Islamic State, which the U.S. government defines as a terrorist organization.

The U.S. military began airstrikes against the Islamic state Aug. 8 as well as airdrops of food and water for Iraqis forced to flee their homes.

"This is something that had to be done, otherwise (the Islamic State) could not be stopped," the archbishop said. "But, we should wonder why we have arrived at this point: Was it not a lack of intelligence? Were we not able to understand what was going on? And then: who gave these (Islamic State fighters) such sophisticated weapons?"