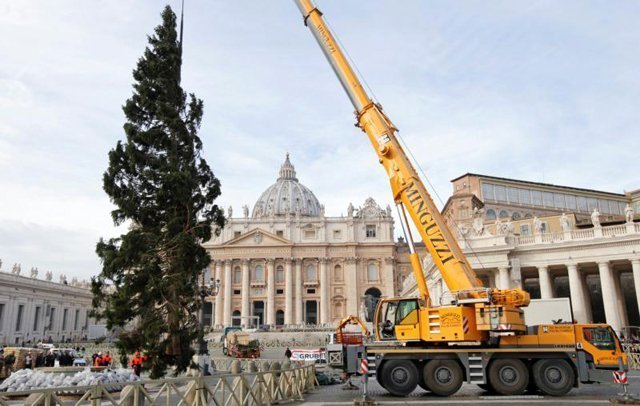 The Vatican Christmas tree is positioned in St. Peter's Square at the Vatican Nov. 24. The 82-feet-tall tree is from the Trentino province in northern Italy.
By Catholic News Service
VATICAN CITY (CNS) — As a towering spruce tree was erected in St. Peter’s Square, the Vatican released Pope Francis’ liturgy schedule for Advent, Christmas and the month of January.
The 82-feet-tall Christmas tree arrived in the square Nov. 24.
According to the papal calendar released by the Vatican the same day:
— Pope Francis will celebrate an evening Mass Dec. 12, the feast of Our Lady of Guadalupe. The Mass will include ancient liturgical hymns composed in indigenous languages, including Nahuatl, Quechua, Mapuche and Guarani. The Sistine Chapel Choir be will joined the Latin American Choir under the direction of conductor Eduardo Notrica.
— The pope will celebrate Christmas Mass at 9:30 p.m. Dec. 24 in St. Peter’s Basilica.
— Pope Francis will give his Christmas blessing "urbi et orbi" (to the city and the world) at noon Dec. 25 from the central balcony overlooking St. Peter’s Square.
— Dec. 31 in St. Peter’s Basilica, the pope will preside over evening prayer and the singing of the "Te Deum" in thanksgiving for the year that is ending.
— The pope will celebrate a Morning Mass in St. Peter’s Basilica Jan. 1, the World Day of Prayer for Peace and the feast of Mary, Mother of God.
— On Jan. 6, the feast of the Epiphany, Pope Francis will celebrate Mass in St. Peter’s Basilica.
— On the feast of the Baptism of the Lord, Jan. 8, the pope will celebrate Mass in the Sistine Chapel and baptize several babies.
— Pope Francis will preside over an ecumenical evening prayer service Jan. 25, the feast of the Conversion of St. Paul. The service concludes the annual Week of Prayer for Christian Unity.
Copyright © 2022 Catholic News Service, Inc. All rights reserved. Linking is encouraged, but republishing or redistributing, including by framing or similar means, without the publisher's prior written permission is prohibited.