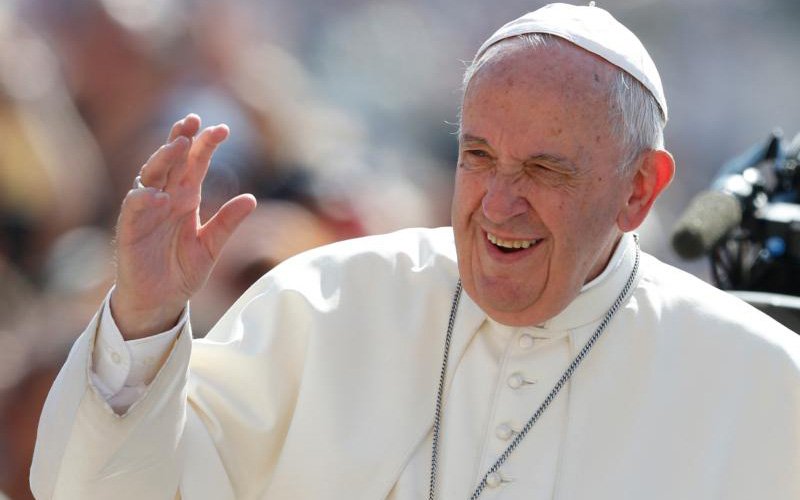 Pope Francis greets the crowd during his general audience in St. Peter's Square at the Vatican June 26, 2019. (CNS photo by Paul Haring)

VATICAN CITY (CNS) — The Wednesday general audience offers the pope the opportunity to help people understand the fundamental teachings and beliefs of the Catholic faith.

Usually given in a clear and simple style, each catechesis is often part of a longer series of talks dedicated to a major theme, which together form a deep, detailed overview of basic tenets or can offer a more analytical commentary and examination of Catholic teaching.

After a monthlong hiatus for the summer, Pope Francis will return with his weekly reflections Aug. 7, marking his 280th catechesis in his six years as pope.

Following the tradition of his predecessors, Pope Francis has used the weekly gathering to get back to basics.

In fact, he continued a yearlong series started by Pope Benedict XVI on core Catholic beliefs for the Year of Faith just as Pope Benedict similarly continued the series St. John Paul II had begun before his death on the Psalms and Canticles of Vespers.

The Wednesday general audience talk represents “an important weekly appointment” and, together with the pope’s other reflections before the Sunday Angelus or in his daily homilies, “they represent the spiritual heart of his Petrine ministry,” Vatican News said Aug. 6.

It suggested people go back and read or listen to the complete texts, utilizing official Vatican sources at w2.vatican.va or www.youtube.com/user/vatican, in order to know “what Francis says, beyond certain media adaptations that only amplify certain subjects.”

Elected just before Holy Week, Pope Francis dedicated his first catechesis in 2013 to Jesus’ journey from the cross to his resurrection and how following Jesus means having to “come out of ourselves in order to go to meet others, to go towards the outskirts of existence, to be the first to take a step towards our brothers and our sisters” just as God did “to come among us.”

Right after, the pope picked up where the retired pope left off with catechesis for the Year of Faith, with multiple series on the Creed and the nature and mystery of the church.

In 2014, he continued his reflections for the Year of Faith with a series on the sacraments, the gifts of the Holy Spirit and again, on the nature of the church, recalling Pope Benedict’s description of the church “as an ecclesial ‘we'” because there is no “do it yourself” or “free agents” who only worry about their own relationship with Jesus “outside the communion and mediation of the church. These are dangerous and harmful temptations,” Pope Francis said.

With a synod of bishops on the family in 2014 and in 2016, the pope dedicated 33 talks during 2015 with a catechesis on the family. Introducing the series at his general audience Dec. 10, 2014, he said no speech at the synod “called into question the fundamental truths of the sacrament of marriage, namely: indissolubility, unity, fidelity and openness to life.” His audience talks also reflected on God’s plan for families and the real challenges they face.

He introduced a new series of 38 talks on mercy in 2016 for the Year of Mercy and, during Advent, ushered in a lengthy series on the nature of Christian hope that continued into 2017.

Christians are powerful witnesses to hope “each time we take the side of the least and of the marginalized, or do not respond to evil with evil, but rather with forgiveness, without vengeance, forgiving and blessing — each time we do this — we shine forth as living and bright signs of hope, thus becoming instruments of solace and of peace, according to God’s heart. Thus, let us go forth with kindness, meekness, being amiable and doing good, even to those who do not love us or who hurt us,” he said April 5, 2017.

On Nov. 8, 2017, he began a series of talks on the Mass, saying it was “fundamental that we Christians clearly understand the value and significance of the Holy Mass, in order to live ever more fully our relationship with God.”

“Although we are the ones who stand in procession to receive Communion,” he said in his catechesis March 21, 2018, “in reality it is Christ who comes towards us to assimilate us in him. There is an encounter with Jesus! To nourish oneself of the Eucharist means to allow oneself to be changed by what we receive.”

“As it unites us to Christ, tearing us away from our selfishness, Communion opens us and unites us to all those who are a single thing in him. This is the wonder of Communion: we become what we receive!” he said.

The Easter season of 2018 saw the start of a series of reflections returning to the sacraments but focusing specifically on baptism and confirmation.

This was followed in June by the start of a series on the Ten Commandments and Jesus’ reminder that he has come “not to abolish (the law or the prophets) but to fulfil them.”

During Advent in 2018, Pope Francis started a series on the Lord’s Prayer, saying “even if we may have been praying for many years, we still have to learn! Man’s prayer, this yearning which arises so naturally from his soul, is perhaps one of the deepest mysteries of the universe.”

On May 29, 2019, he began his reflections on the Acts of the Apostles, saying it speaks about the journey of the Gospel in the world, showing “the marvelous bond between the Word of God and the Holy Spirit, who inaugurates the time of evangelization.”

The week before his last general audience June 26, 2019, Pope Francis referred to Pope Benedict, as he often does, saying “The Spirit works through divine attraction: God captivates us with his love and thus engages us, in order to move history and set in motion the processes through which new life seeps in.”