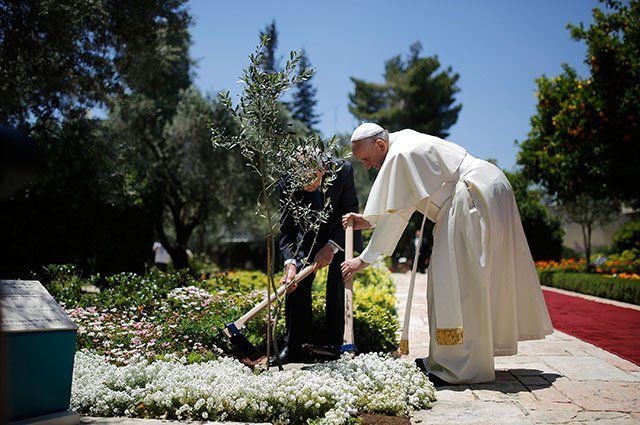 Pope Francis and Israel's President Shimon Peres plant an olive tree as a symbol for peace after their meeting at the president's residence May 26.

VATICAN CITY (CNS) — Given the Holy Land’s long and complex history of military, religious and cultural conflict, the run-up to Pope Francis’ May 24-26 pilgrimage was inevitably marked by fears it would be marred by controversy — or worse.

Now that the pope’s second international trip is over, so are those fears. The suspense is not, however. With a number of surprising gestures and remarks over three busy days, the pope left Catholics and others around the world wondering what comes next on a range of important questions.

The pope and the peace process

Pope Francis made headlines on the second day of his trip by inviting Palestinian President Mahmoud Abbas and Israeli President Shimon Peres to join him at the Vatican to pray together for peace.

Most observers have set low expectations for the event, scheduled for June 8, in part because Peres’ position is largely ceremonial and, in any case, his term is set to expire in July.

Pope Francis would no doubt say pessimists underrate the power of prayer. He could point to his efforts last fall against U.S. President Barack Obama’s plans to use military force in Syria, which culminated in an unprecedented prayer vigil for peace that drew some 100,000 to St. Peter’s Square. The U.S., of course, did not strike Syria after all.

Practical results aside, Pope Francis’ bold initiatives have earned him the role of pre-eminent voice for peace in the Middle East. That distinction could have more than symbolic importance for local attitudes toward the region’s fast-diminishing Christian minorities.

During his trip, the pope told Abbas and Peres that Christians contribute to the "common good" in their countries and deserve to be treated as "full citizens."

No speech could make that point more eloquently than news photos of Jewish and Muslim political leaders praying for peace, side by side in the Vatican.

The original reason for Pope Francis’ Holy Land trip was a meeting with Ecumenical Patriarch Bartholomew, to mark the 50th anniversary of a historic encounter between their predecessors. The earlier meeting led the Catholic and Orthodox churches to lift mutual excommunications imposed in 1054 and opened the modern period of ecumenical dialogue.

Not surprisingly, this year’s event did not yield any comparable breakthroughs, but there were hints of progress to come.

The pope told reporters on the flight back to Rome that he and Patriarch Bartholomew discussed possible collaborative efforts to protect the environment. They also talked about prospects for resolving differences in how the churches set the date of Easter every year.

Pope Francis, with his characteristic frankness, called the latter a "ridiculous" problem. Yet reconciling the timing of Christianity’s most sacred feast could have a big impact on ordinary Catholics and Orthodox, leading many to view full communion between the churches as a more realistic goal. (Catholic and Orthodox leaders in the Holy Land have already begun that process by agreeing that, beginning next year, they will celebrate Easter on the same date.)

During an inflight news conference on the way back to Rome, the pope was asked about reports that Cardinal Tarcisio Bertone, a former Vatican secretary of state, mishandled 15 million euros in funds held by the Institute for the Works of Religion, commonly known as the Vatican bank.

Without naming the cardinal, the pope said the matter was "being studied, it’s not clear. Maybe it could be true, but at this moment it’s not definitive."

The results of the investigation, if it finds the cardinal at fault, would have implications beyond the case itself. Few actions by the pope could do as much to show his seriousness about reforming the Vatican bureaucracy as publicly disciplining or rebuking the man who, until just last October, served as the Vatican’s highest official.

The pope told reporters the door is open to allowing more married priests in the Catholic Church, in the Latin rite as well as the Eastern Catholic churches, where the practice is already established.

"Celibacy is not a dogma of faith," he said, which should not have surprised anyone familiar with the church’s discipline. But he added pointedly: "Not being a dogma of faith, the door is always open."

Given how controversial this issue already is in parts of the Catholic world, the pope’s comment is likely to prompt only more discussion.