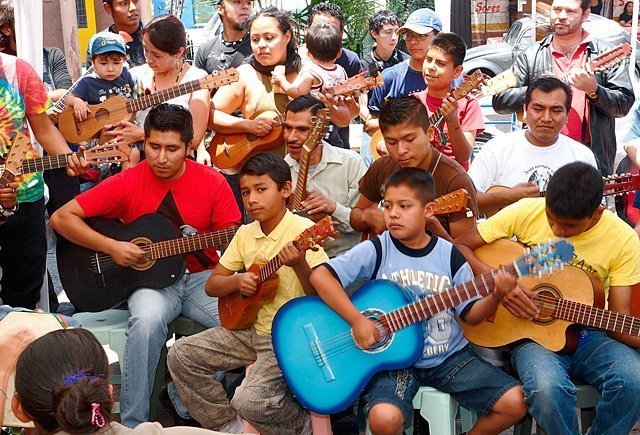 In this June 9, 2011 file photo, young people in Mexico City attend a guitar class. The Vatican says Pope Francis did not mean to offend Mexicans with his comment avoiding "Mexicanization."

SALTILLO, Mexico (CNS) — A private e-mail from Pope Francis to a personal friend was never meant to offend Mexican sensibilities, the Vatican said in a statement after the message — which suggested Mexico was synonymous with drugs and violence — was made public.

In a note to Mexico’s ambassador to the Vatican, Mariano Palacios Alcocer, the Vatican said the pope’s use of the term "Mexicanization," presumably to describe problems in Argentina, "did not attempt in any way to hurt the feelings of the Mexican people, for whom he nurtures a special affection … much less undervalue the commitment of the government in the struggle against drug trafficking."

"The expression ‘avoiding the Mexicanization’ was utilized by the pope in a strictly personal and informal email, in response to an Argentine friend very committed to the struggle against drugs, who had used this phrase," the Vatican said.

Use of the term "Mexicanization" caused consternation for an increasingly image-conscious and embattled Mexican government and President Enrique Pena Nieto, who previously promoted an image of Mexico modernizing under his administration and largely stayed silent on the issues of drugs and crime. Pena Nieto’s plans unraveled with his awkward handling of the kidnapping and presumed killing of 43 teacher trainees last September and subsequent revelations that he, his wife and finance minister purchased properties from prominent government contractors.

Pope Francis "did not intend to do more than emphasize the seriousness of drug trafficking afflicting Mexico and other Latin American countries," the Vatican said in a March 24 statement.

"It is precisely this seriousness that determines the fight against drug trafficking as a priority in the programs of the Mexican government. These (programs) aim to combat violence and restore peace and tranquility for Mexican families, focusing on the causes of this social evil."

The phrase occurred in an email Pope Francis sent his friend Gustavo Vera, whose Fundacion Alameda is dedicated to working with victims of human trafficking and the sex trade. Vera subsequently published the email on his organization’s website.

"Hopefully we’re in time to avoid the Mexicanization. I was talking to some Mexican bishops and it’s a terrible situation," Pope Francis wrote in his email.

"More than searching to stigmatize Mexico or any other region of the Latin American countries, we should pursue an increased focus, better spaces for dialogue and more spaces for the recognition of the efforts Mexico and Latin America have made in respect to a topic that worries us," he said.

The crackdown on drug cartels and organized crime has cost an estimated 100,000 lives over the past eight years and left more than 20,000 missing in Mexico.

Mexico’s bishops have promoted peace, but often allowed the government to take the lead on the issue of security. Until recently, most bishops refrained from making strong statements on security matters.