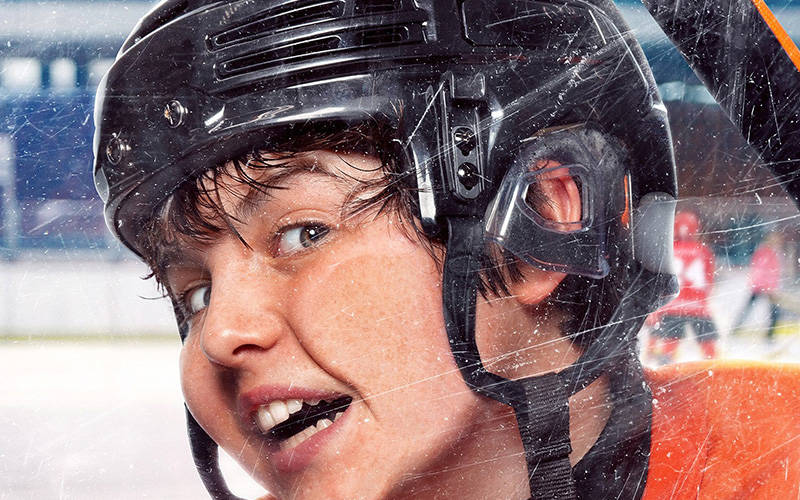 This is a movie poster of the film “The Mighty Ducks: Game Changers,” streaming now on Disney+. (CNS photo courtesy Disney)

NEW YORK (CNS) — Popular with the public, though not with critics, the trilogy of “Mighty Ducks” films released between 1992 and 1996 were sufficiently successful at the box office that the folks at the Magic Kingdom have decided to repurpose the concept for television.

The result, “The Mighty Ducks: Game Changers” (Disney+), has considerable appeal despite some blemishes.

Those with long memories will recall that the titular hockey team was once a collection of misfits who played purely for love of their sport. Those days are long gone as the TV series begins, so much so that devoted 12-year-old Evan Morrow (Brady Noon), having aged out of the 9-11 bracket, fails to make it onto the squad for which he now qualifies.

In fact, Coach T. (Dylan Playfair), who makes this decision, tells Evan that if he hasn’t become a good player by this time in his life, he shouldn’t bother with hockey anymore. This draws a furious response from Evan’s single mom, Alex (Lauren Graham), and a recording of her outburst goes viral — much to Evan’s embarrassment.

We have already seen that Alex tends to be a tad overprotective. She insists, for instance, that Evan wear sunscreen while on the ice, despite the fact that he plays in an indoor rink.

Alex comes up with a seemingly far-fetched idea which she pitches to grieving Evan: Let’s start our own team. Although he admits he’s not really a hockey player, tween podcaster Nick (Maxwell Simkins), the Morrows’ next-door neighbor, bolsters the proposal by agreeing to become Evan’s first teammate.

Now all the trio needs to do to qualify for the league is find four more players, a home rink and a coach. Alex leaves it up to Evan and Nick to recruit some of their classmates while she works on the other two requirements.

Her search for a venue eventually leads to the Ice Palace whose manager, Gordon Bombay (Emilio Estevez), was the coach of the original Mighty Ducks — a fact unbeknown to Alex, though not, of course, to fans of the franchise.

Cranky Gordon — first seen trying to repair a smoking Zamboni by hitting it with a wrench — initially spurns Alex’s proposal that he host the new team, saying he hates hockey and doesn’t like kids, either. But when she offers him some of the support money she has received from a program for children’s sports, Gordon, desperately needing funds for the upkeep of the derelict Ice Palace, quickly changes his mind.

Based on the two episodes reviewed, the program is witty and well-acted, with Graham serving as the charming, authentic cornerstone of the adults and Noon and Simkins providing strong leadership for their peers among a pleasingly ethnically diverse cast.

It’s also clear that writer Steven Brill — the moving force behind the big-screen “Ducks” — not only wants to provoke laughs, he’s out to tackle some serious issues as well. These include the over-professionalization of kids’ sports and the negative impact of peer pressure on youngsters, its effects only magnified by the power of social media.

While family-friendly for the most part, the show is not free of problematic elements. References are made, for example, to Nick having “two moms,” though so far, they are only discussed, not seen.

Additionally, Alex gets Evan to tell a lie so they can access the lost and found room at the Ducks’ rink and claim gear that isn’t theirs — not exactly sterling maternal behavior. The dialogue, moreover, includes the occasional crass expression.

Taken together, all this suggests that the series is best suited to adults and older teens.