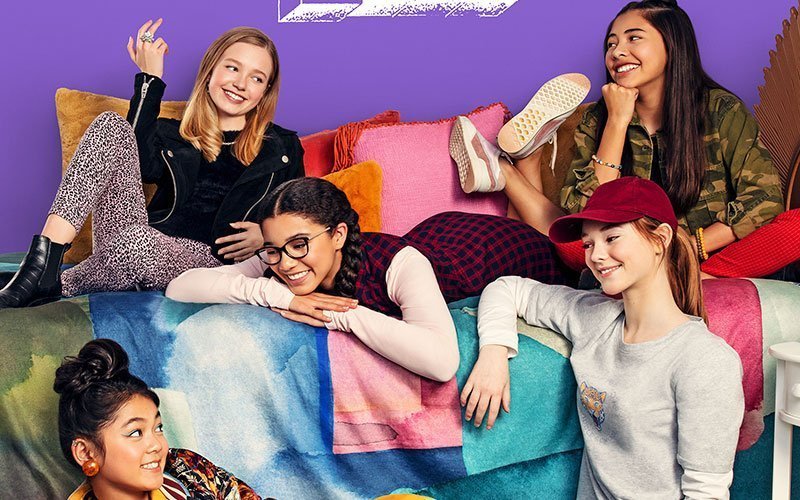 "The Baby-Sitters Club" is streaming on Netflix. (CNS photo courtesy of Netflix)

NEW YORK (CNS) — Based on the exceedingly popular series of children’s novels first written by Ann M. Martin in the 1980s, and updated for our times, “The Baby-Sitters Club” is available now on Netflix.

Despite winsome performances by its young leads and its purported intention to appeal to all ages, the dramedy — made up of 10 half-hour episodes — contains some problematic material, requiring either careful guidance from parents or a resolution not to allow youngsters to watch in the first place.

Having written for “Glow,” Netflix’s popular adult comedy set in the world of female wrestling, Rachel Shukert developed this series about another largely feminine world, that of the middle school girls who form the titular group in the fictitious town of Stonybrook in Fairfield County, Connecticut.

To its credit, “The Baby-Sitters Club” doesn’t include any sexual content or violence, and the occasional use of mildly colorful language isn’t objectionable. As viewers will anticipate, however, even in prosperous Fairfield County, the society these young women inhabit isn’t perfect. Divorce, blended families and single parents are all present — as, too, is bullying.

Stacey has some reason to fear revealing her illness. Prior to her transfer, her former best friend Laine Cummings (Beatrice Kitsos) humiliated Stacey. Ignorant of her condition, Laine posted a video of Stacy in the throes of insulin shock that went viral.

Japanese American Claudia’s grandmother, Mimi Yamamoto (Takayo Fischer), recalls her experience in Manzanar, a California detention camp where she was interned with other citizens and residents of Japanese descent during World War II. Mimi also experiences mild aphasia after suffering a stroke.

Other story lines, by contrast, stray into inappropriate territory for a youthful audience. Wanting to help Mary Anne redecorate her bedroom, Stacey and Claudia aim for a style based on the Bravo show “Queer Eye for the Straight Guy.” Another newcomer to the club, California-bred Dawn Schafer (Xochitl Gomez), has a gay father and an aunt, Esme Porter (Karin Konoval), who’s a witch.

As though this entitled her to be considered clergy, Esme presides over the wedding of Kristy’s mom, Elizabeth (Alicia Silverstone), to wealthy businessman Watson Brewer (Mark Feuerstein).

One of Mary Anne’s babysitting charges, preschooler Bailey Delvecchio (Kai Shappley), likes to pretend he’s a princess. After Bailey develops a high fever, and Mary Anne rushes him to the hospital, the doctor (Eric Ruggieri) and nurse (Helenna Santos) treating him refer to Bailey as a boy, only to be upbraided by Mary Anne for their lack of sensitivity.

The makers of the show clearly intend viewers to side with Mary Anne in her insistence that others treat Bailey as a girl. Biology, the implicit message seems to run, counts for nothing when weighed against the imposed acceptance of transgenderism.

It says something about contemporary mores that, despite such content, “The Baby-Sitters Club” is rated TV-G — general audience. Parents committed to Christian values will likely see it in a different light.

On the other hand, unlike the many teenager characters who are depicted in popular culture as indifferent, cynical or sullen, the leads here mostly come across as sincere and authentic yet fallible. When they make mistakes or hurt each other, they determine to become better friends.

Anxious to raise topics they consider socially relevant, however, the writers burden these kids with concerns, such as income inequality, that seem a little less than age-appropriate. Even conceding that current pressures may force youngsters to grow up prematurely, the portrayal of that reality will probably inspire both sadness and nostalgia in older TV fans.