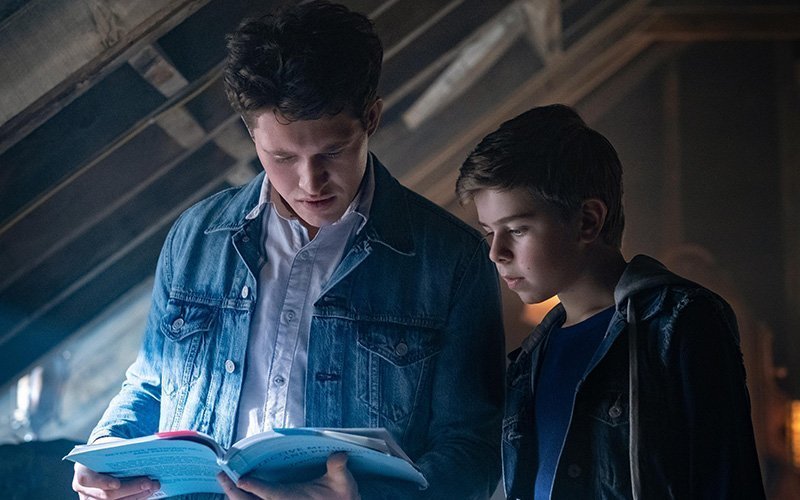 Rohan Campbell and Alexander Elliot star in a scene from the Hulu series "The Hardy Boys." (CNS photo by Brooke Palmer/Hulu)

NEW YORK (CNS) — “The Hardy Boys,” a series of mystery novels featuring two teenage sleuths, has been delighting young readers since its first title appeared in 1927.

Written by “Franklin W. Dixon” (actually a pen name covering multiple writers), the books — now numbering in the hundreds — have been adapted for broadcast multiple times, most memorably for a cheesy 1970s television show starring Parker Stevenson and Shaun Cassidy. Now it is Hulu’s turn, with 13 one-hour episodes created by Steve Cochrane and Jason Stone that are all currently streaming.

The basic premise remains: inspired by their detective father, Fenton (James Tupper), the Hardy lads, Frank (Rohan Campbell) and Joe (Alexander Elliot), use their wits to solve crimes — with some help from their friends.

Purists will quibble at changes made to the main characters, presumably to appeal to a broader audience. For one, Frank and Joe are no longer peers in high school, one year apart in age. Frank is now 16, not 18, and Joe is just 12.

Their best friend, Alan “Biff” Hooper, a strapping boxer in the novels, is now Joe’s pal Elizabeth (Riley O’Donnell) who, for some reason, also goes by Biff.

Differences aside, this version retains the gee-whiz sense of adventure and fun of its source material. But it’s not entirely family-friendly, given occasional intense violence and an occult-based story line.

Set in the 1980s, “The Hardy Boys” opens with a family tragedy: The boys’ mother, Laura (Janet Porter), is killed in a car crash. A benign homemaker in the books, Laura is here an investigative journalist who was working on an explosive story. So her demise is suspicious.

Fenton goes undercover in search of the truth. But not before dropping his sons off to spend the summer with their Aunt Trudy (Bea Santos) in the seaside town of Bridgeport (Bayport in the books).

Frank and Joe soon discover that Bridgeport, where their mother grew up, is not the bucolic place it appears, but a haven of secrets and scandals. Looming over the community is their enigmatic grandmother, Gloria (Linda Thorson), a wealthy, powerful — and much feared — matriarch.

Naturally inquisitive, Frank and Joe stumble on a conspiracy involving a golden idol with magical properties. Before long, clues suggest that Laura was about to expose its secrets — and that her death was indeed no accident.

“The ground you walk on is cursed,” warns the town fortune teller, Anya (Joan Gregson). “If you’re not careful, your lives will be, too.”

If not accursed, then certainly full of rollicking exploits and suspense. After Joe comes into possession of the idol, he and Frank are pursued by a 7-foot-tall albino called, aptly, Tall Man (Stephen R. Hart) and by a bumbling conman, J.B. Cox (Atticus Mitchell).

Joined by new friends Biff, Callie (Keana Lyn), Chet (Adam Swain) and Phil (Cristian Perri), the boys are determined to solve the mystery of their mother’s murder, while staying one step ahead of Aunt Trudy and Biff’s mom, police officer Jessie (Jennifer Hsiung).

Although their pursuit of truth and justice is ultimately worthy and entertaining, the young investigators do an awful lot of breaking and entering along the way. So their blithely law-flouting methods are best left to the realm of fiction.