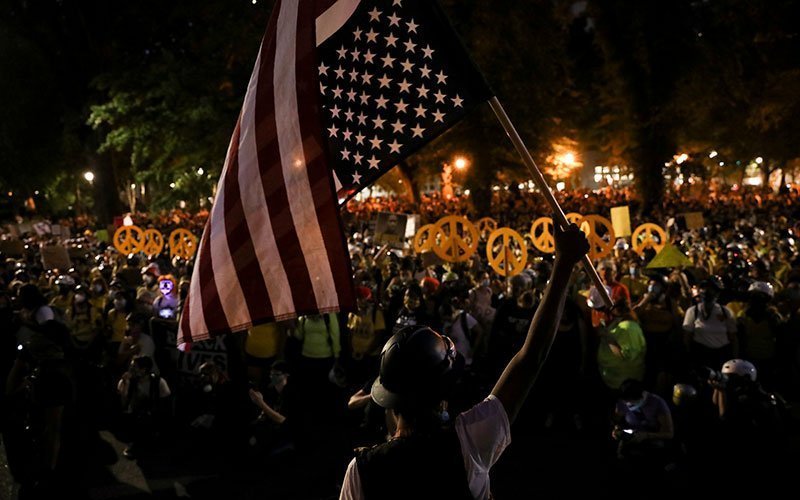 PORTLAND, Ore. (CNS) — As the national spotlight landed on his city and its ongoing protests, Portland Archbishop Alexander K. Sample July 24 made a plea for citizens to leave violence behind and return to a campaign for racial justice.

“Who remembers George Floyd anymore?” Archbishop Sample said during one of his “Chapel Chats,” weekly 30-minute sessions livestreamed from his Portland home.

“This all began over the tragic killing of a man” and the racial inequity the killing revealed, the archbishop told viewers. “We need to stay focused on the issue that gave rise to this. Let’s stay focused on what we can do to eradicate this evil.”

Since Floyd, a Black man, died while in the custody of white police in Minneapolis May 25, protests for racial justice have risen every evening in downtown Portland. Fueled in part by the city’s skeptical culture, the demonstrations begin peacefully, but in the wee hours turn violent in the vicinity of the federal courthouse.

Portland police initially turned to tear gas, but as the weeks wore on scaled back. Protests began to taper off.

The energy and violence surged in early July after camouflage-clad federal officers arrived in the city and began arresting protesters without identifying themselves. Local officials decried the uninvited federal presence. The Trump administration said it is protecting federal property.

When protesters breach a fence around the courthouse each evening, federal police exit the building using tear gas, batons and sometimes nonlethal bullets. One nonviolent protester, 26 year-old Donavan La Bella, suffered a fractured skull July 11 when hit by a plastic projectile fired by a federal officer. Even Portland’s mayor, Ted Wheeler, was enveloped in tear gas July 22 when he came to address demonstrators.

Protests nationwide have sprung up in sympathy of what is happening in Portland.

Archbishop Sample, who has been an outspoken supporter of peaceful protests, has toured the area to see the damage. Graffiti covers the federal courthouse and other downtown buildings.

“What is happening in this city is very sad. Even depressing. It’s a mess,” the archbishop said, admitting many people have urged him to choose a side in the protests. He has refused, instead saying he wants to frame the turmoil in Gospel truths.

“We should be outraged at injustice,” he said. “Racism remains in our society. … We should be taking action to secure justice for all people.”

He chided those on any side whose words and acts increase division, saying that Satan is “dancing with delight” over the disharmony.

“I want us to think calmly, rationally and soundly about these issues,” the archbishop said. “A Christian tries to bring people together, to bring people into dialogue in order to bring about a greater good.”

The archbishop said he is disturbed by those who say all police are racist. “To me, that seems a stretch,” he said. “Yes, there are some bad eggs. And there are some very good servant police who serve us and keep us safe.”

The archbishop offered Catholic social teaching as a road map for healing. He particularly cited “Open Wide Our Hearts,” the U.S. Catholic bishops’ 2018 letter on racism.

“We need to act as citizens of this country to fight against the evil of racism,” Archbishop Sample said. “And we need to reject the violence. Violence has no place in this very serious debate that must happen.”

Pointing to the nonviolent teachings of the Rev. Martin Luther King Jr. the archbishop said that responding to racism with violence is “piling one evil upon another.”

Calling Rev. King “a man of God,” the archbishop said that much of the trouble in Portland and elsewhere is a result of a culture that has turned from God and the meaning and virtue that emerge from belief.

Langlois is managing editor of the Catholic Sentinel, newspaper of the Archdiocese of Portland.