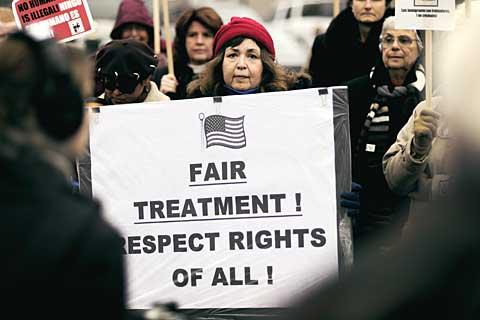 Marilu Aguilar joins protesters outside the U.S. Border Patrol station in Irondequoit during a Dec. 14 rally to call attention to the need for immigration reform.

Parishioners throughout the diocese are being invited to take part in a postcard campaign to convey to their U.S. congressional representatives their support for comprehensive immigration reform.

The postcards are being provided by Justice for Immigrants, a campaign of the U.S. Conference of Catholic Bishops, and will be offered to parishioners during diocesan Public Policy Weekend Feb. 13-14.

Text on the postcards reads: "I am a concerned constituent and agree with the U.S. Catholic bishops that the U.S. immigration system is broken and is in need of repair. I ask that this year you support immigration reform legislation that keeps immigrant families together, adopts smart and humane enforcement policies, and ensures that immigrants without legal status register with the government and begin a path toward citizenship. Our families and communities cannot wait!"

Diocesan personnel have been conducting programs throughout the diocese to educate people on the need for immigration reform. At some venues, attendance has been sparse, diocesan officials said.

"My hope would have been that more people would have taken advantage of the opportunity to learn about the issue," said Mercy Sister Janet Korn, social-justice awareness coordinator for diocesan Catholic Charities. "Those that have come have been very interested and asked wonderful questions."

Sister Korn said parishioners need to keep in mind that immigration policy decisions affect real people. She said even those immigrants who have the proper papers are nervous about being harassed as they go about their daily lives.

"We get caught up in the issue and we forget the people behind the issue," Sister Korn said.

Peter Mares, an outreach worker for Catholic Charities of Wayne County who manages the day-to-day operations of the migrant-housing center La Casa, said he believes the current immigration system does not recognize the contributions that migrants make to their communities.

"(Migrants) are not even being recognized as human beings," Mares said. "They are in the shadows, hiding."

EDITOR’S NOTE: Details on the USCCB’s Justice for Immigrants campaign are available at www.justiceforimmigrants.org.