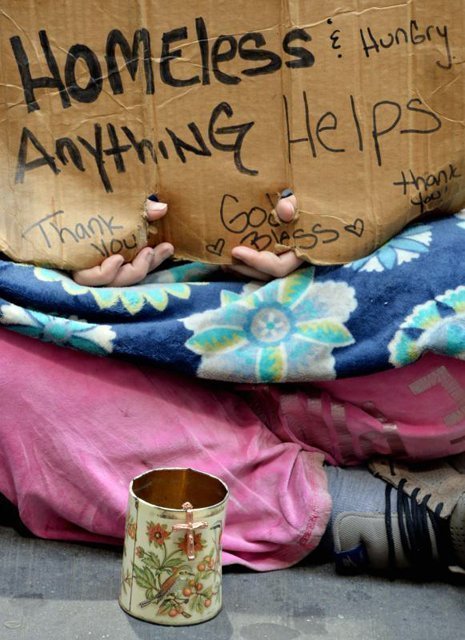 A homeless woman sits on a sidewalk in 2014 in New York City. Despite there being 46.7 million Americans living in poverty, there has been little talk about the needs of poor people on the presidential campaign trail.
By Dennis Sadowski
Catholic News Service
WASHINGTON (CNS) — America has 46.7 million people living in poverty, but there’s been little talk on the presidential campaign trail about the needs of poor people.
No doubt, poverty is a tough sell in a campaign where middle class votes — both blue collar and white collar — are important to success come Election Day Nov. 8.
But economic difficulties are fueling much of the voter angst, and Democrat Hillary Clinton and Republican Donald Trump are attempting to tap into that uncertainty by portraying their economic policies as good for what ails the country and will lead to massive numbers of well-paying jobs.
"Poverty is an issue in the campaign, it’s just not being talked about," said Archbishop Thomas G. Wenski of Miami, chairman of the U.S. bishop’s Committee on Domestic Justice and Human Development.
"It’s certainly driving a lot of the things in the campaign. It’s certainly driving a lot of the anger. But we don’t see on either side really any substantive policy proposal," Archbishop Wenski told Catholic News Service.
Archbishop Wenski and other election observers doubt that poverty will suddenly become an election year concern this time around.
"It’s hard to engage in a discussion about poverty or about anything else in this particularly very strange campaign," he said. "This is atypical in many ways and therefore some of these issues are not being engaged because it almost seems like an exercise in futility."
So while poverty is not on the lips of the candidates, it would seem that some of their proposals are directed toward improving economic opportunity for the working classes and perhaps helping poor people as well.
Trump’s proposals focus on reducing income taxes across the board and making it easier for companies to hire, invest in infrastructure and boost production. He has complained that businesses operate under too many restrictive regulations and promised that his administration would undertake a systematic review of those regulations and eliminate any that hinder business activity.
The Republican’s plan is light on particulars when it comes to social policy, education and supports for low-income families, particularly the extreme poor.
Clinton, meanwhile, has stressed that she would implement a job creation plan focused on much-needed nationwide infrastructure improvements. She has pledged to address underlying causes of poverty, boost early childhood education and ensure a strong safety net, especially for those stuck in intergenerational poverty.
The Democrat also said it is important to continue improving the State Children’s Health Insurance Program and the Affordable Care Act to keep people on the path to the middle class.
Yet poverty has been a largely avoided topic in the campaign.
"It’s incredibly foolish to ignore poverty," said Kathryn J. Edin, Bloomberg distinguished professor of sociology at Johns Hopkins University and co-author of "$2 a Day: Living on Almost Nothing in America." "What people aren’t doing and they should be doing is to link what’s happening in our cities to the unbelievable disparities we’re seeing across the country.
"Why did Baltimore burn? What’s going on in Milwaukee, Ferguson? It’s not frustration with the police, while that’s important. It’s anger and dissatisfaction with the lack of opportunity and living in poverty," Edin said.
Christina M. Greer, associate professor of political science at Jesuit-run Fordham University, suggested that poverty has been avoided in the campaign because poor people don’t vote in the same numbers as other economic classes.
"The poor tend not to vote because of all these institutional factors and they get left out," she explained.
That means, Greer said, candidates would rather turn their attention to influencing those who do vote: the middle class.
"To try and galvanize poor people with 70-some days left and you’re not guaranteed a return on your investment, it’s something most politicians don’t turn to," she said.
Rather than spending a lot of time trying to engage the presidential candidates, Catholic Charities USA has focused its advocacy efforts on Congress in a long-standing effort to build support for legislation that funds programs that would ease the burden of poverty in the country.
Dominican Sister Donna Markham, Catholic Charities’ president, said the agency feels it will be more successful advocating for poor people through individual members of Congress.
"We will talk with anyone on either side of the aisle to promote the alleviation, reduction of poverty," she told CNS.
She added that showing House and Senate members how programs work in local communities does a lot more to affect the country’s social policies.
"We have made over 200 visits to Congress folks this past year, always dealing with the question how are their proposals going to affect the poor, especially the most vulnerable," Sister Donna told CNS.
While the presidential candidates can set a moral tone for how to tackle poverty, Edin suggested a more fundamental shift in thinking about poor people is necessary.
"The reason I think poverty is not in vogue is because I don’t think candidates want to embrace groups who voters see as ‘them,’" she said.
"So what’s the solution? A lot of social programs are organized around shaming people, stigmatizing them. We create social programs that are at odds with American norms and values," Edin explained.
The country would benefit, she said, by "bringing ‘them’ into us" and upholding human dignity.
– – –
Follow Sadowski on Twitter: @DennisSadowski.
Copyright © 2022 Catholic News Service, Inc. All rights reserved. Linking is encouraged, but republishing or redistributing, including by framing or similar means, without the publisher's prior written permission is prohibited.