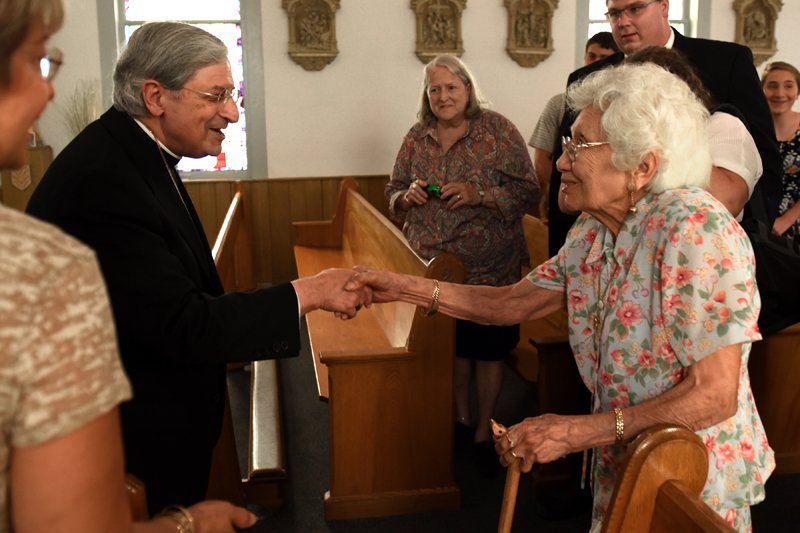 PRATTSBURGH — Strictly speaking, the Aug. 14 Mass and reception held in the auditorium of Prattsburgh Central School was a celebration of the 150th anniversary of St. Patrick Church, which is located just around the corner from the school building. For many of the parishioners in attendance, however, the celebration served as a recognition of the close-knit community that worships at the Prattsburgh church. 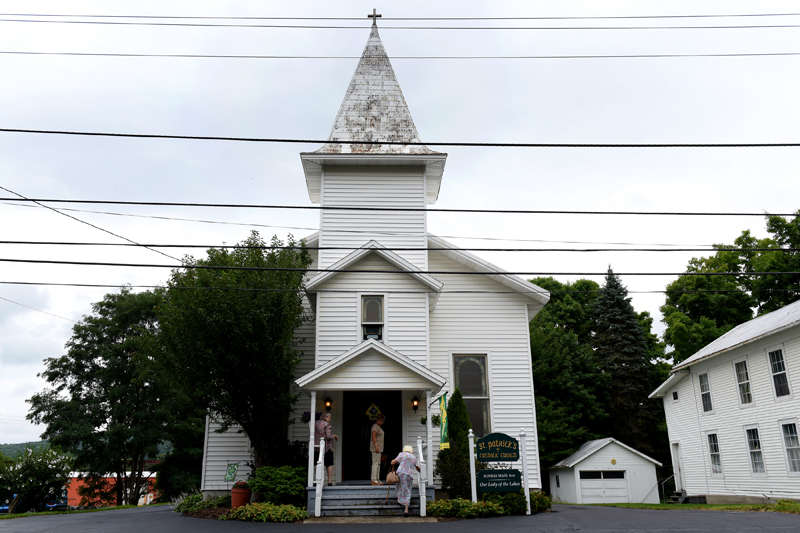 "For everyone to come together like they did made (the celebration) so beautiful," remarked longtime parishioner Sharon Peck. "It’s just been a very joyous day. It’s very humbling to have everyone come together."

St. Patrick Church is one of the four worship sites of Our Lady of the Lakes Catholic Community and was built by Irish immigrants in 1866. The church’s construction served as "a striking witness to the Catholic faith," noted Bishop Salvatore R. Matano, who concelebrated the anniversary Mass with several of the church’s current and former pastors.

"St. Patrick’s Church, while its frame has undergone many renovations, its original structure remains the same, just as the faith remains the same, firmly rooted in Christ," Bishop Matano said during his homily.

Although the church has been renovated several times, its small size made it necessary to seek other accommodations for the anniversary Mass, which attracted current parishioners as well as members of the Prattsburgh community who are not Catholic but wished to celebrate with their Catholic friends and neighbors, Peck said. Several Our Lady of the Lakes parishioners who typically attend Mass at the other worship sites in Penn Yan, Naples and Stanley also traveled to Prattsburgh to celebrate St. Patrick’s anniversary.

"It’s amazing," remarked Jeffrey Maciejewski, who usually attends Mass at St. Michael Church in Penn Yan and will enter St. John’s Seminary in Boston on Aug. 27. "There’s just such a history, and St. Patrick has such a great community."

"It’s like family," added Joanne Donovan, a longtime parishioner who was at the celebration with her husband, daughter and grandchildren.

St. Patrick’s sense of community has seen parishioners through some tough times, noted parishioner Conrad Tunney. In 2009 a proposed pastoral plan for Our Lady of the Lakes called for the closure of the Prattsburgh church, but parishioners rallied to save St. Patrick and were successful, Tunney said. The fact that the church is still open made the 150th anniversary especially sweet, said parishioner Vicki Kopylczak.

On the other hand, the celebration was bittersweet because one of its chief organizers, John Filkins, passed away suddenly in early July, Tunney said. The Mass was offered in his honor, and during Bishop Matano’s opening remarks, he referred to Filkins’ strong faith and contributions to St. Patrick.

"John was a pillar of our church," noted parishioner Judy Beauchemin.

Both Beauchemin and Tunney said no one realized quite how much Filkins had done, both to organize the anniversary celebration and for the parish in general, until he passed away. Parishioners are still mourning the loss of Filkins but carried on with plans for the anniversary celebration as a way of honoring their fallen friend, Tunney said. This isn’t surprising, as St. Patrick parishioners are known for their close-knit community and willingness to reach out to others, he added.

"Anything you want done, you only have to ask and people step forward and volunteer," he said.

"Everyone was willing to help out, and everyone had something to do," added Peck, who has attended St. Patrick for 71 years.

That spirit of cooperation and willingness to help out is not limited to Prattsburgh’s Catholic community, however. Peck said the Prattsburgh Central School District "bent over backwards" to accommodate the anniversary celebration and were very gracious. Parishioners, for their part, are very caring and work hard not only to keep their church open, but also to give back to the community, Maciejewski said.

Such eagerness to help others is present in parishioners of all ages. Eleven-year-old Noah Puffer regularly serves as an altar server at St. Patrick and did so during the anniversary celebration. Noah said he enjoys volunteering his time because "I can meet new people and I can help them."