Pray for one, pray for all, pope says at general audience - Catholic Courier 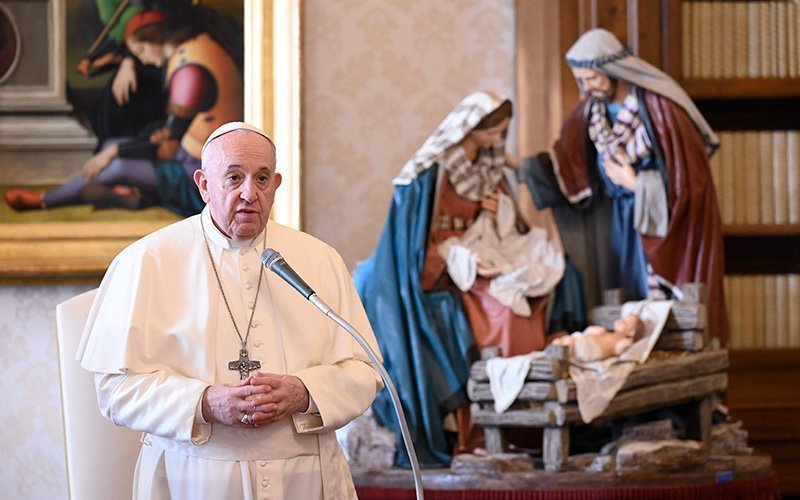 A Nativity scene is pictured as Pope Francis leads his general audience in the library of the Apostolic Palace at the Vatican Dec. 16, 2020. (CNS photo by Vatican Media)

VATICAN CITY (CNS) — If Christians forget to remember in prayer people who are suffering, their prayer can become a superficial activity that feeds their ego rather than seeking the good and well-being of others, Pope Francis said.

“Those who pray never turn their backs on the world” but instead, seek to intercede for humanity through prayer, the pope said Dec. 16 during his weekly general audience.

“When believers — moved by the Holy Spirit — pray for sinners, no selection is made, no judgment or condemnation is uttered,” he said. “They pray for everyone, and they pray for themselves. At that moment, they know they are not that different from those for whom they pray.”

Continuing his series of talks on prayer, the pope reflected on “the prayer of intercession.”

Although many people seek solitude and silence in prayer, he said, they should do so always keeping “the door of their hearts wide open” to pray for those who can’t or won’t pray for themselves.

People who pray aware of others are like “God’s antennas in the world” and, as stated in the Catechism of the Catholic Church, have “a heart attuned to God’s mercy.”

Continuing to cite the catechism, the pope said that those who pray for others participate in Christ’s intercession before God for all of humanity.

True prayer, he continued, must also be done in a “spirit of love.” Those who do not pray with love in their hearts, especially for others, only “pretend to pray or they think they are praying and they’re not because that spirit of love is missing.”

Recalling Christ’s parable of the Pharisee and the publican praying in the temple, the pope said it serves as a reminder that “we are not better than anyone” and that as sinners, all share a common “fragility, suffering and being sinners.”

One who prays like the Pharisee does it “in an arrogant way” that isn’t prayer but is more like “looking at yourself in the mirror with makeup on.”

“We are all leaves on the same tree,” Pope Francis said. “Each one that falls reminds us of the great piety that must be nourished in prayer for one another. Let us pray for one another; it will be good for us and for all.”