Prayer apps are popular for millions of Catholics - Catholic Courier 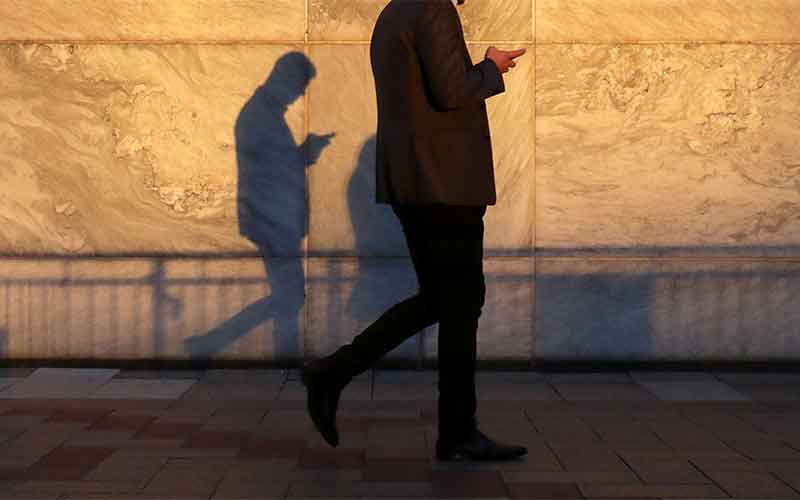 A man uses a smartphone as he walks down a London street Sept. 28, 2018. (CNS photo by Russell Boyce/Reuters)

WASHINGTON (CNS) — In the digital world, smartphone users can find apps for just about any purpose: banking, news and information, entertainment, travel, finding a job, self-improvement and, of course, prayer.

Dozens of Catholic-specific apps exist. They have varying levels of presentation and content.

Styles range from a basic offering of prayer or Scripture to those that combine inspirational music or traditional chants with pleasant graphics to help guide users through the daily Mass readings, the rosary, meditation, the Liturgy of the Hours, prayers for the Lenten season and even step-by-step preparations for the sacrament of reconciliation.

Beyond devotional features, some apps have been built to allow users to post prayers or prayer requests, comment on a particular challenge they are facing, or invite others to offer support at a troubling time.

Whatever their design, prayer apps have become a popular option for millions of Catholics worldwide seeking to better connect with God and establish a stronger prayer life.

“The things we’ve heard from folks … is just that it is a place of peace amidst what is a relatively crazy world, both politically and the pandemic that obviously brought with it incredible suffering and grief,” Alex Jones, CEO and co-founder of Hallow, said of his popular Catholic app.

Since its launch in December 2018, Hallow had seen more than 2 million downloads as of March 1, Jones, a University of Notre Dame graduate, told Catholic News Service.

He credits the app’s widening popularity to content that is regularly updated and expanded and speaks to people’s needs. The app offers a free version with more than 3,000 meditations, as well as a premium version, Hallow Plus, with more expansive content for a monthly or annual subscription fee.

While Hallow enjoys enormous popularity, other apps have garnered their own devoted followers as well, with some people using more than one prayer app in their lives.

Jennifer Kane, who catalogs and evaluates Catholic apps at her website CatholicAPPtitude.com, told CNS she has found several excellent resources among the hundreds she has downloaded. Her website, which went live in 2013, has evaluations for apps such as Laudate, Click to Pray, Pray as You Go, Mass Explained, Divine Office and Universalis. Her site includes those that are free and those that require a fee or subscription.

Prayer apps are not just for Catholics. Christian prayer and meditation apps are burgeoning as well, especially since the COVID-19 pandemic emerged in 2020. Among the most widely downloaded are London-based Glorify, founded in 2019, and Los Angeles-based Pray.com, founded in 2016.

Like Hallow, the Glorify and Pray.com apps offer free basic access as well as enhanced versions for monthly and annual subscriptions.

The growing popularity of prayer apps has attracted attention from investors.

Hallow, Pray and Glorify alone have raised more than $120 million from investors.

For example, in 2021 Hallow raised more than $50 million. Jones said pitching the app to potential backers was difficult, but that the funding has allowed the 40-person company to continue to expand its offerings in the hope of eventually turning a profit.

Hallow’s investors include venture capitalist and political activist Peter Thiel; Scott Malpass, co-founder and board chair of Catholic Investment Services and retired chief investment officer at the University of Notre Dame; Narya VC, a venture capital firm owned by J.D. Vance, author of “Hillbilly Elegy” and a candidate for the Republican nomination for the U.S. Senate in Ohio; and a handful of other venture capital firms.

Meanwhile, Glorify, announced in December it had raised $40 million. Since its founding, Pray.com has raised $34 million in five funding rounds, according to Crunchbase.com.

Such large investments have led to questions about how the apps — like most other apps and online services — use the personal data collected from users and whether such information is being monetized.

Writing in an op-ed in The Washington Post in May 2020, venture capitalist Katherine Boyle said the pandemic especially contributed to the popularity of prayer apps and high-tech investors noticed.

“A holy trinity is in place: isolated people hungry for attachment, religions desperate for growth in an online world and technology investors searching for the consumer niches yet to digitize,” Boyle wrote.

Such circumstances have led to questions about the actions of some prayer app developers as they try to generate greater revenues outside of subscription fees.

In January, BuzzFeed reported on the experience of a Pray.com user who said she did not realize the comments she expressed regarding a personal trauma were being mined to match her personal actions in the app to other details about her that were purchased from data brokers.

Pray.com’s policy explains that the company collects data including a user’s physical location, the links they follow and the text of posts. Such information is supplemented with information from “third-parties such as data analytics providers and data brokers” and can include “your gender, age, religious affiliation, ethnicity, marital status, household size and income, political party affiliation and interests … geographic location and personal information.”

The company, the policy explains, shares users’ personal information including the specific devices they use, with “third-parties” for “commercial purposes.”

Pray.com did not respond to CNS requests for comment.

Media observers at two Catholic institutions said steps to sell or monetize personal data by any app developer pose ethical and moral questions. They cautioned users to carefully think about what they post, especially on free apps.

Florence Chee, program director at the Center for Digital Ethics and Policy at Loyola University Chicago, told CNS that requiring users to enable certain smart device settings before an app can be used amounts to “coerced interactions.”

“The user has very little power, very little awareness in determining where their data goes and how long that data is used for what purposes down the line,” Chee said.

While gathering and sharing personal data is legal under current regulations, Chee questioned whether companies should be doing so. She compared prayers or reflections that a user may post on an app to being in the confessional with a priest, saying she believed they should remain private.

“Just because it’s legal to collect data about people doing prayer apps doesn’t mean you should. It is more nebulous, but this is what differentiates law and ethics. This is where more folks need to be advocating for a more ethical framing of apps for prayer services as an example,” she said.

Kirsten Martin, director of the Notre Dame Technology Ethics Center at the University of Notre Dame, expressed concern for apps based on “this idea of selling a point of vulnerability to others that don’t have our interest in mind.”

Kane at CatholicAPPtitude said she has evaluated dozens of apps since 2013, looking at ease of use and the content of each including those where users can upload personal thoughts and prayers. She has seen apps with very direct privacy policies that explain whether personal information will be shared to third-party data brokers.

“Marketing is very sophisticated. So most of the time your (information) is going to get targeted and it’s going to get to other entities,” Kane said in reference to any online site or phone app.

“Security is an ethereal thing,” she added. “If we can approach it that way, don’t put anything out there that you don’t want people to find out.”

At Hallow, an updated privacy policy took effect March 28. It specifically states that “we do not sell, rent, or otherwise provide users’ personal data to any data brokers. Any “private sensitive personal data,” such as journal entries or reflections generated by users, is encrypted and only accessible to the user, the policy states. Similarly, such data is not shared with “any advertising partners,” it says.

“We never sell data or send to data brokers or any of that stuff,” Jones told CNS, explaining that the company has “always tried to be as transparent as possible” to maintain the trust of users.

“I think privacy … is an incredibly important thing across industries, especially when you’re talking about something as intimate and personal as someone’s faith experience, which oftentimes they’re inviting God and using the Hallow app to deal with grief or suffering or anything that could be sensitive,” Jones said.

In a March 29 email response to questions, a Glorify representative told CNS the app does not sell or otherwise share personal information of users outside of the company. Glorify officials are working to update the privacy policy “to make it simpler and easier to understand” and users will be notified by email when it is posted, the representative said.

The message also said the app, with 2.7 million downloads, is seeing its return on investment through the subscription fees it charges for premium content.

The Electronic Frontier Foundation, based in San Francisco, has long promoted privacy for users of any type of app, prayer or otherwise.

Bennett Cyphers, staff technologist at the foundation, said efforts have been underway for years to protect the online privacy of app users specifically and computer users generally but that they have achieved limited success.

“There’s a real lobbying push from the companies to water down any potential privacy laws or kill any laws that would threaten their business model,” Cyphers said.

“We don’t think that the bargain that users implicitly agree to when they download a free app — which is you get to use this free app and in exchange your data is collected and exploited and shared and sold without your consent, frequently without your knowledge — is fair or ethical at all,” he continued.

“The majority of people hate this,” he added, “but it continues because it is so opaque. It’s so difficult for people to track what’s going on and frequently to even figure out what’s going on the because the laws we have that require companies to tell you what they’re actually doing are frequently really inadequate.”