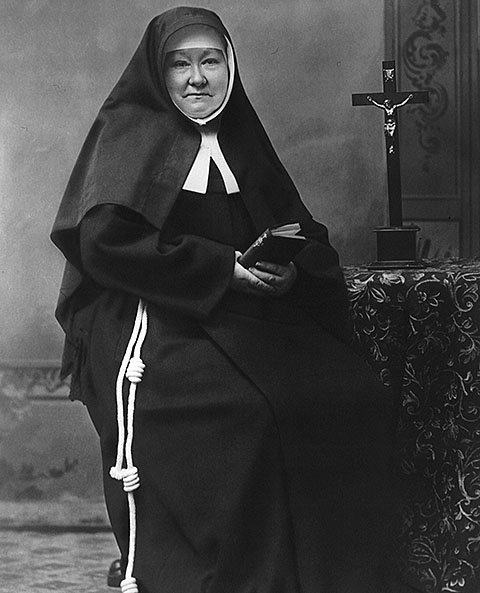 Mother Theresia Bonzel, foundress of the Sisters of St. Francis of Perpetual Adoration, will be beatified Nov. 10 in Paderborn, Germany. She is pictured in an undated portrait.

OMAHA, Neb. (CNS) — The prayers of two religious sisters born in the Archdiocese of Omaha were key elements of the Vatican-approved miracle that led the way to the upcoming beatification of their order’s foundress, Mother Maria Theresia Bonzel of the Sisters of St. Francis of Perpetual Adoration.

In April, the order announced she would be beatified Nov. 10 in Paderborn, Germany.

The announcement followed the Vatican’s recognition of a miracle attributed to her intercession that occurred in Colorado Springs, Colo., nearly 15 years ago.

That was when Jan Burgie asked the late Sister Evangeline Spenner and Sister Margaret Mary Preister to pray for her 4-year-old son, Luke, who was suffering from severe gastrointestinal symptoms including pain and diarrhea.

The two nuns prayed a novena to Mother Bonzel seeking her intercession in Luke’s healing. Luke’s symptoms stopped suddenly and without medical explanation Feb. 22, 1999. He has remained healthy since.

The healing was reported to the Vatican in 2001, prompting an investigation that included interviewing Luke’s doctors.

"One day he just got up and said, ‘I’m fine,’" Burgie told the Catholic Voice, Omaha’s archdiocesan newspaper, in a telephone interview from Colorado Springs. "He’s never had any residual pain or difficulties — no Crohn’s disease, food allergies, nothing."

Sister Spenner died in 2005. Sister Preister left Nov. 4 to attend the beatification Mass in Paderborn with Sister Spenner’s sister, Sister Marietta Spenner. They were traveling with three other members of the order who also were born in the Omaha Archdiocese.

From the late 1800s into the 1990s, the Sisters of St. Francis of Perpetual Adoration order was a strong presence in schools and hospitals in Nebraska, and many children who studied under the nuns or were impacted by their ministry were inspired to join the order, several of the sisters said.

Now, at least five nuns with the order serve in Nebraska. Three of them are in the Grand Island Diocese: Sister Marietta Spenner, in pastoral ministry and faith formation in Sidney; Sister Rita Beason, director of pastoral care at a hospital in Kearney; and Sister Frances Ann Havel, a receptionist at a funeral home in Grand Island. The other two nuns, who were born in Omaha, are Sister Rose Ann Stillmock, now serving in homebound ministry in Omaha, and Sister Rose Marie Imig, serving as a hospital chaplain in Lincoln.

In an interview before she left for Germany, Sister Spenner said she was looking forward to the beatification.

"I’m anxious for it," she said. "Mother Bonzel is an intercessor in a bigger, broader way for all of God’s people."

Sister Spenner said she also is representing her late sister and other members of order unable to attend the beatification.

"I will do everything I can to stand with her," Sister Spenner said.

Burgie said having her son, now 19, the object of a miracle has been a blessing, although the attention can be a burden and Luke shies away from the publicity, she added.

Sister Preister worked for years in pastoral ministry, as a hospital chaplain and novice mistress. Now retired, she is currently living in Colorado Springs where the order’s western province has its headquarters.

She was excited about the trip and the beatification.

The beatification Mass was to be celebrated at the Paderborn cathedral, with Cardinal Angelo Amato, prefect of the Vatican’s Congregation for Saints’ Causes, as the principal celebrant.

Archbishop Hans-Josef Becker of Paderborn was to concelebrate and give the homily.

Ruff is news editor of the Catholic Voice, newspaper of the Archdiocese of Omaha, Neb.