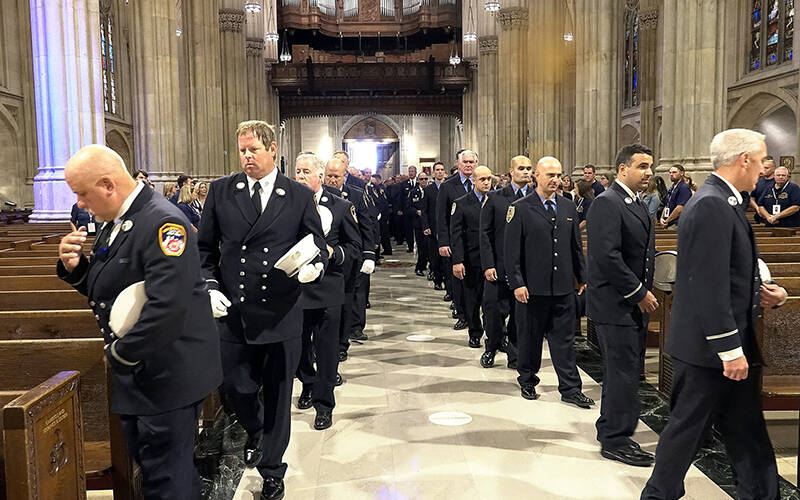 NEW YORK (CNS) — New York Cardinal Timothy M. Dolan said he couldn’t think of “a better place to be” than St. Patrick’s Cathedral “on this somber anniversary” of the 9/11 terrorist attacks.

He shared his sentiments in opening remarks at a morning Mass he offered Sept. 11 at the cathedral to members of the New York City Fire Department and to families of firefighters who perished on 9/11.

“My welcome to all of you this morning is especially heartfelt and fervent,” the cardinal said in his homily.

“While the entirety of this one nation under God observes this two-decade anniversary of the 9/11 tragedy, you all have a special claim to it,” he added.

“You, FDNY, were there. You, FDNY, lost cherished colleagues — 343,” the cardinal said. “You, FDNY, ask the questions … in your duty to save, rescue and protect.”

“And you, beloved families — how much we love you — realized that day, that the day you had long dreaded, the phone call you often feared, the supreme loss you knew was part of the package, had arrived all at once.

“So you are all very much at home here at St. Patrick’s, folks,” he said.

“This happens to be where we come to sob, to remember with reverence and gratitude, to recall with love those we gave away that day.”

The cathedral, he continued, is where we come to hear the inspired word of God, especially the teaching of Christ.

“This is where we come to bow heads, to whisper a prayer, to dry a tear, to fight off a lump in the throat, to light a candle and realize we’re not alone. God is with us, family, friends, community, Mother Church, is with us.”

At a 9/11 remembrance Mass Sept. 8 at the Cathedral Basilica of the Sacred Heart in Newark, New Jersey, Cardinal Joseph W. Tobin reminded the congregation that what happened 20 years ago was more than a national tragedy. For many in the local area, it was personal, he said.

The terrorist attacks directly impacted New Jersey families and residents who “had no idea that morning they were saying a final goodbye to someone whose loss would rip out their hearts,” the cardinal said in his homily.

Some of those who lost loved ones in the World Trade Center attack were at the Mass.

During a Sept. 11 Mass for firefighters at the Co-Cathedral of St. Joseph in Brooklyn, Bishop Nicholas DiMarzio of Brooklyn said: “Remembrance is important, but even more important is our communion with those who have gone before us in death. Life has many, many difficult moments. We live our life for God and for other people.”

He also told the firefighters that as they continue their journey they should ask God to be with them and “as we remember those who have gone before us, that we will be as brave as them as we follow our life’s mission.”

Washington Cardinal Wilton D. Gregory, the principal celebrant and homilist of the Sept. 11 Mass at St. Patrick’s in Washington, said the anniversary of the terrorist attacks is a time to “pause to remember the thousands of people whose lives were lost and their families who still grieve,” and also an opportunity to “recall the extraordinary dedication of first responders and even ordinary citizens.”

He said the anniversary is not “simply a moment for deep national mourning, but it is also simultaneously a time for deep hope and pride in the courage and the strength of our nation.”

At the beginning of the Mass, Father Andrew Wakefield, pastor of St. Patrick’s, said: “It is hard to believe we are 20 years removed from that day when the world changed.”

Chicoine is news editor of Catholic New York, newspaper of the Archdiocese of New York.