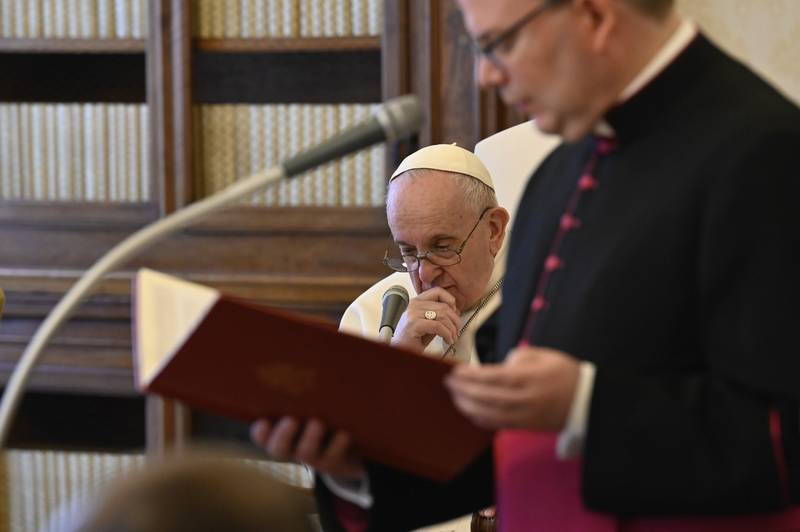 Pope Francis listens during his general audience in the library of the Apostolic Palace at the Vatican April 21, 2021. Continuing his series of talks on prayer, the pope reflected on the importance of speaking the words of prayers out loud rather than seeing prayer just as a mental exercise or form of meditation. (CNS photo by Vatican Media)

VATICAN CITY (CNS) — Because prayer is a dialogue with God, people should not dismiss or be embarrassed by saying their prayers out loud or in a whisper, Pope Francis said.

“Vocal prayer is an essential element of the Christian life,” and when Jesus taught the disciples how to pray, it was with a vocal prayer, the “Our Father,” the pope said April 21 during his weekly general audience.

Continuing his series of talks on prayer, the pope reflected on the importance of speaking the words of prayers out loud rather than seeing prayer just as a mental exercise or form of meditation.

Too often, people think reciting a prayer is something only children or the uneducated do, but it is the way Jesus taught his followers to pray, he said.

“The words we speak take us by the hand. At times they restore flavor, they awaken even the sleepiest of hearts,” they reawaken forgotten feelings and they “lead us by the hand toward experiencing God,” he said.

People should be humble when seeing the elderly who unfailingly show their fidelity to the duty of prayer and who are “often the great intercessors of parishes,” he said.

“They are the oaks that from year to year spread their branches to offer shade to the greatest number of people,” he said. And even though they, too, must have faced moments of darkness and emptiness, they remain faithful to vocal prayer.

“It is like an anchor, one can hold onto the rope and remain faithful, come what may,” he said.

“The words of a prayer get us safely through a dark valley, direct us toward green meadows rich in water and enable us to feast in front of the eyes of an enemy,” as Psalm 23 teaches, he said.

The words can both reflect and shape feelings, helping feelings come to light, excluding and censoring nothing, the pope said.

“Pain is dangerous if it stays covered, closed up within us” as it can poison the soul, Pope Francis said.

Sacred Scripture shows the human heart can be home to harmful or hateful feelings, he said, “and when these evil feelings come knocking at the door of our heart, we must be able to defuse them with prayer and God’s words.”

Vocal prayers “are the only ones, in a sure way, that direct to God the questions he wants to hear. Jesus did not leave us in a fog. He told us, ‘Pray then like this,’ and he taught the Lord’s Prayer,” he said.