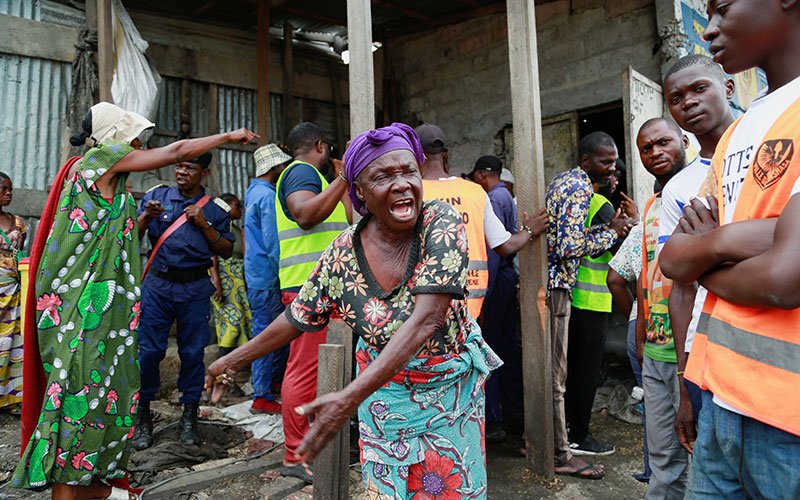 Rose Nasomani, a street vendor, reacts as police prepare to seize her bags of corn as part of an effort to clean up the Congolese capital ahead of Pope Francis' visit, in Kinshasa, Congo, Jan. 12, 2023. The pope is scheduled to visit Kinshasa Jan. 31-Feb. 3. (CNS photo by Justin Makangara/Reuters)

VATICAN CITY (CNS) — Pope Francis’ fifth trip to the African continent will highlight gestures of peace and reconciliation, consoling the victims of violence but also emphasizing the importance of each person sowing peace in the family, the neighborhood and the nation.

The pope is scheduled to travel to Kinshasa, Congo, Jan. 31-Feb. 3 before making an ecumenical pilgrimage to Juba, South Sudan, Feb. 3-5 with Anglican Archbishop Justin Welby of Canterbury and the Rev. Iain Greenshields, moderator of the Presbyterian Church of Scotland.

“It is enough, or it should be enough, that the pope is going to support the peace process; but the fact that he and his colleagues have committed to doing this as a joint visit should be understood to be a spectacular commitment to the peace process itself,” said Chris Trott, the British ambassador to the Holy See and former British envoy to Sudan and South Sudan.

Although the civil wars in both Congo and South Sudan officially have ended, the people continue to suffer from horrific acts of violence, which force the large-scale displacement of communities and keep much of the population in poverty.

Both countries are rich in natural resources, which makes the poverty even more glaring, but also gives the powerful or the disgruntled something else to fight over.

Pope Francis frequently decries the notion that “Africa is to be exploited.” As he told the Comboni Missionaries’ magazine in an interview published Jan. 14, the world’s powerful nations gave Africa “independence halfway: they give them economic independence from the ground up, but they keep the subsoil to exploit,” extracting oil or minerals and paying only a pittance.

Archbishop Ettore Balestrero, the nuncio to Congo, told reporters in Kinshasa Jan. 10 that Pope Francis’ plan to visit the country is an acknowledgement of Congo as the African nation with the most Catholics — close to 50 million faithful — and “the country of the first black bishop of the African continent,” Nzingo Mpemba, also known as Bishop Henrique de Portugal, the son of the ruler of Kongo who was ordained a bishop in the early 1500s.

The theme of the pope’s visit, “All reconciled in Jesus Christ,” he said, is a call to the Congolese to set aside grudges and unite to end the great suffering of their compatriots who live under the constant threat of violence, particularly in the eastern part of the country.

Pope Francis will stay in Kinshasa, the capital, but his original itinerary for Congo included a day trip east to North Kivu province for Mass and a meeting with the survivors of the conflicts there.

But the violence in North Kivu has flared up again, canceling that part of the papal trip.

In early December Catholics and other Christians took to the streets in a protest supported by the Congolese bishops. In a message read at the rally, the bishops accused Rwanda, and to some extent Uganda, of perpetrating the violence in the East through the M23 rebel militia.

The Congolese government also has blamed Rwanda and Uganda for sponsoring the rebel movement and using the rebels as cover to steal minerals that are abundant in eastern Congo.

But M23 is one of only dozens of armed groups operating in the area. The Allied Democratic Forces, a group affiliated with Islamic State, claimed responsibility for the bombing of a Pentecostal church in Kasindi Jan. 15, which killed at least 14 people.

In November Bishop Placide Lubamba Ndjibu of Kasongo issued a public appeal to the government to restore order in the East.

People need lasting solutions to the disputes over gold mining in eastern Congo, which, he said, are “sowing a climate of terror and desolation, accompanied by deaths, rapes, school closures, the destruction of food reserves and looting of livestock.”

Looting livestock is a major problem in South Sudan as well and is related to the problem of forcing young women into early marriage, a problem Irish Loreto Sister Orla Treacy has been fighting for decades.

In 2005, six years before South Sudan achieved its independence from Sudan after 50 years of war, Sister Treacy and two other Irish sisters arrived in Rumbek to open a school for girls. The students were accepted only if their parents signed a promise to allow the girls to complete high school and not marry them off in exchange for cattle, which is the most stable currency in the land and the chief sign of wealth.

Sister Treacy told Catholic News Service Jan. 15 that so far, “we have had a good year in Rumbek, the best, I can say” in terms of peace and of keeping students in school. “We have a new, strong governor who has worked with the different communities to try and help to build peace. He has also passed a bill against early and forced marriage. We still get troubles but at least now we can quote the governor and tell families to go to him if they don’t like our answer!”

The Irish sister and some 50 students and members of justice and peace committees in the Diocese of Rumbek were in training in mid-January. They are planning a nine-day, 200-mile walk to Juba to join Pope Francis, Archbishop Welby and the Rev. Greenshields for an ecumenical prayer service for peace.

The visit, she said, can “help to shine a spotlight on South Sudan. We hope that it will generate world interest and also help push our leaders to keep working for peace and development.”

Ambassador Trott, who was involved in negotiating the 2018 peace agreement among the major actors in South Sudan’s civil war, said the ongoing conflicts have an ethnic element because they are regional, but “at its heart is about access and control of resources,” including oil, minerals, water and rich farmland. “This fight has always been about who benefits from those resources and who controls them.”

“This is where the churches come in,” he said, because a peace process can address power and resource sharing, but the success of an agreement depends on a willingness to implement it and to reconcile with former enemies for the good of the nation.

“Diplomats can only talk to their heads or about their pockets,” the ambassador said. “But I think the three ecumenical leaders can really appeal to people’s sense of responsibility” and what they want their legacy to be.